SpaceX has magical goals for Falcon 9

Elon Musk, CEO of The Space Exploration Company – commonly known as SpaceX – has spoken about the improvements necessary at his Pacific island launch site in the US Army’s Kwajalein test range to support the Falcon 9, progress on the vehicle’s development, and work on the next generation of Merlin 1 engines.

The Falcon 9 is SpaceX’s planned 8.7 mT to LEO (Low Earth Orbit) launch vehicle, using ten Merlin 1 engines – nine on the first stage, and one on the second stage.
Interview conducted by Braddock Gaskill (Part 2 of 3)

NASASpaceflight.com: Will you be upgrading the LOX plant on Omelek?  It has been causing you lots of headaches.

Elon Musk: We do plan on actually installing a much larger state-of-the-art LOX plant for Falcon 9 sometimes next year, but we’re not planning on upgrading our little LOX plant on Kwajalein right now.  It is a bit of a clunker.  It is fine for use in emergency situations, but it’s not really capable of continuous LOX production without a lot of care and feeding.

So we are actually going to transfer our LOX from Hawaii, and we acquired some additional LOX storage containers so that we have additional launch liquid oxygen.

We are looking forward to a heavy duty seven and a half ton per day LOX plant; a 2006 model type thing, which we will install probably next year.

NASASpaceflight.com: Omelek would seem like it would need more infrastructure to handle the Falcon 9.  Do you need to add a new dock?  I guess there is probably a lot that needs to be done on the island to support the Falcon 9?

Elon Musk: Not as much as you might think.  We need to put in a much bigger hanger.  Increase the amount of fuel, LOX, and pressurant that is stored on the island.  But there’s no major upgrades required; we don’t need a new dock or anything like that.

We’ve already done the layout of Falcon 9 on Omelek.  There is sort of a peninsula on the island; it will be part of the peninsula, and it actually works out pretty well.

We’re going through the final preparations for submitting our environmental approval for Falcon 9, and we’ll probably submit those in the next month or so.  I’d like to complete the Falcon 9 launch system on Omelek by the end of next year. 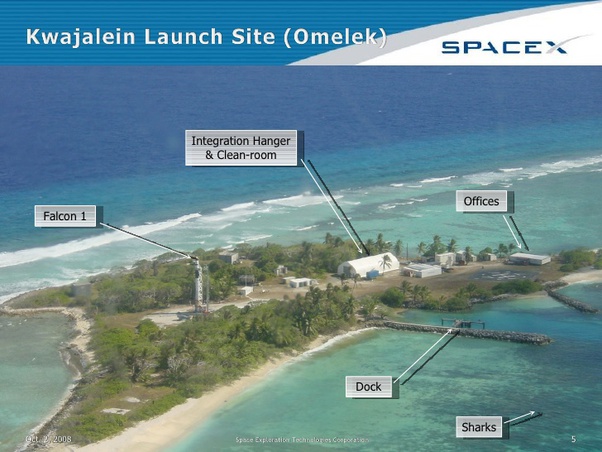 An aerial view of Omelek Island in the Kwajalein Atoll, where every Falcon 1 launched from. Omelek was to be expanded to support initial Falcon 9 flights, but the idea was later shelved. Credit: SpaceX

NASASpaceflight.com: How have things been progressing on the Falcon 9, and when could we expect a test firing?  I understand towards the end of this year, from your last update.

Elon Musk: Yes, if not at the end of this year, then very early next.  We expect to have everything on the Falcon 9 first stage except the engines done in about three months.  The first stage is the far more challenging stage of the vehicle.

Everything except the engines should be done in about three months. We have five of the nine engines that are ready to go, and then another four which are in a production cycle.

NASASpaceflight.com: Are these the Merlin 1B with the better turbo-pump, or are these the 1A engines?

Elon Musk: There are three versions of Merlin.  The Merlin 1A is the basic Merlin which is on the Falcon 1, with the ablative chamber, and that is about a 72,000 lb sea-level thrust engine.

Then there’s the Merlin 1B, which is upgraded in thrust, and upgraded turbopump, upgraded main valve – a number of improvements all around – but still an ablative chamber.  That’s actually not something that is going to fly.  That is an interim engine.  In fact we may or may not fire those engines, depending upon the progress of the Merlin 1C.

So the Merlin 1C is the engine that is headed for Falcon 9, and it is a fully regen engine.  So it has a copper milled copper chamber attached to a brazed tube wall nozzle chamber.

In fact it is similar to the way in which the Space Shuttle main engine is done.  That’s actually the highest heat capacity, lowest weight architecture you can do.

NASASpaceflight.com: Has either 1B or 1C been test fired? I guess 1C is still in late design stage at this point?

Elon Musk: Actually, 1C is past design, it’s actually in fabrication right now. We expect to have the 1C thrust chamber on the test stand in about… let’s see… I’d say about 7 or 8 weeks.

We don’t really consider the 1B to be a very significant technology difference to the 1A, because it still is an ablative chamber.  It is more thrust (etc.) But they are relatively minor changes.

NASASpaceflight.com: So the Falcon 9 first stage firing that will happen late this year or early next – that will be full 1C at this point, or it’s looking like 1B?

If it looks like 1C – if we nail it pretty soon after putting it on the test pad – then we will run it with 1C instead of 1B when we want to do the Falcon 9 initial test.

But either way the 1Cs will be on the Falcon 9 first stage by probably the end of the first quarter of next year, at the latest.

NASASpaceflight.com: And then Falcon 9 is still slated to run sometime next year – actually fly?

Elon Musk: You know, I’ve given some thought to how to communicate launch schedules, because whenever you do development, it’s very difficult to predict what’s going to go wrong, that is to say that almost certainly, something will go wrong.

In the past, what I’ve put forward is kind of a nominal schedule; basically if things go right this is what date this will launch.  But that’s not really a good indicator of when it’s gonna launch, because things never go entirely right.

We are aiming for the first half of 2008 as a launch window, and I think that is probably a reasonably good guess.

Currently, we’re going to aim to have everything associated with Falcon 9 done in 2007.  But again because of the uncertainty associated with development, I can bet you – it is a pretty safe bet – that we will encounter issues that we’ll need to resolve that will push out that time-frame into 2008.