Soyuz 2-1B launches with COROT 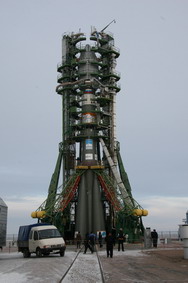 The ESA (European Space Agency) space telescope COROT has launched on Wednesday, via a Soyuz 2-1B launch vehicle, from the Baikonur Cosmodrome at 2:24pm UK time (9:24am Eastern).

The launcher’s Fregat upper stage accurately injected the COROT satellite into its targeted circular polar orbit. A free launch video is available on the link below (read more).

**LIVE LAUNCH UPDATE PAGES** – **FREE VIDEO OF THE LAUNCH** (Video section is FREE, but you need to sign up as a member of the forum to enter the video section of the site. We only use your e-mail to send you your password. It will not be used for spam etc.)

The COROT project, started in 1994, is classed as s high-precision stellar photometry mission, with two scientific goals: to probe the inner structure of the stars and to search for extrasolar telluric planets. Belonging to the Proteus series, it is equipped with a 27-cm diameter afocal telescope and a 4-CCD camera.

The spacecraft is expected to greatly enlarge the number of known exoplanets during its two-year mission and provide the first detection of rocky planets, perhaps just a few times the mass of the Earth.

‘COROT could detect so many planets of this new type, together with plenty of the old type that astronomers will be able to make statistical studies of them,’ claimed Malcolm Fridlund, ESA’s Project Scientist for COROT.

COROT will be the first extrasolar planet search mission capable of seeing the smaller, rocky worlds; although they will have to be in close orbits around their stars. However, it will be soon followed by NASA’s Kepler mission, a space telescope with a 0.95 metre mirror. Kepler works the same way as COROT, looking for planetary transits, and is expected to find the first Earth-sized planets in similar orbits to our world.

‘ESA has been working for a long time towards the detection of Earth-like worlds around other stars,’ noted Sergio Volonte, Head of the Science Planning and Community Coordination Office at ESA. ‘COROT is an important first step in this direction and helps to pave the way for ESA’s future flagship mission, Darwin, dedicated to the direct detection of Earth-like worlds and their atmospheres to search for signs of life.’

COROT will launch atop a Soyuz 2-1B, a variant developed specially for future Soyuz launches from the Guiana Space Centre in Kourou. The generic Soyuz 2-1A has already made two successful flights.

The inaugural flight of the Soyuz 2-1a launch vehicle was performed on November 8, 2004 from the Plessetsk Cosmodrome. This modernized version of Soyuz, which was also used to successfully launch MetOp-A on October 19, 2006, implements a digital control system providing additional mission flexibility and will enable control of the launch vehicle with the 4.1 m ST fairing.

While the change to the digital system caused a scrub of the MetOp-A launch attempt, prior to the successful lift-off in October, the system represents a necessary milestone towards the next generation evolved Soyuz 2-1b launcher as the latest step in a cooperative European/Russian evolution program.

In addition to the 2-1a versionâ€™s features, it utilizes the more powerful third stage engine, significantly increasing the overall launch vehicle performance. This launch will be the first flight for the new third-stage RD-124 full-flow engine, which recently completed a comprehensive series of ground qualification tests.

The launch stage of the mission will take 50 minutes, including two burns of the Fregat upper stage. Confirmation of a successful separation of the space craft won’t be known until around 50 minutes after the event.

The Fregat upper stage (which carries the spacecraft) will then fire its own engine, taking the nose module into a transfer orbit above the Earth. After this first burn, the Fregat upper stage will control the nose module’s direction towards the Sun to maintain proper thermal conditions for the Corot spacecraft during the following coast phase, which lasts for about 35 minutes.

At the correct point on this orbit, Fregat will fire again, to reach the Circular Polar Orbit. The upper stage will then turn the nose module to stabilize it and will release the COROT spacecraft.

The Polar orbit will allow for continuous observation of two large regions in opposite directions of the sky for more than 150 days each. Within each region there are many selected star fields that will be monitored in turn. The first target field is towards Orion, then the spacecraft will turn towards the centre of our Galaxy, the Milky Way.

Discovery would have been ok at WSSH

Discovery debris hit was from booster