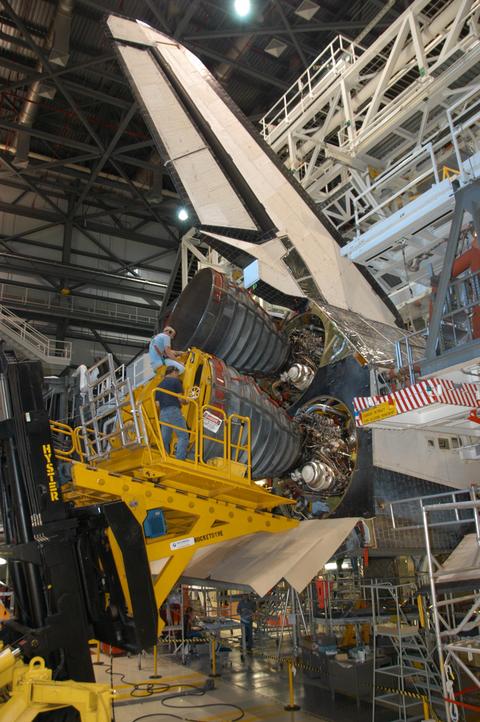 Shuttle orbiters Atlantis and Endeavour have passed key processing milestones, as NASA push towards carrying out the next four missions with the two vehicles.

Atlantis is just a few weeks away from rollover, following the successful mating of the twin Solid Rocket Boosters (SRBs) and External Tank (ET) over the weekend, while Endeavour’s return from an extended modification period continued with the installation of her three Space Shuttle Main Engines (SSMEs).

Currently, Atlantis is targeting a rollover and arrival in the VAB (Vehicle Assembly Building) on February 7, for mating with ET-124 and SRBs, with the stack rolling out to Pad 39A a week later on the 14th, ahead of the March 15 (target) No Earlier Than (NET) launch date.

‘Had great weekend with ET/SRB mate, and this is complete,’ noted Wayne Hale’s notes in the latest Stand-up Integration report. ‘On track for February 7th rollover.’

However, the NASA Operations Report did note a couple of issues that arose during mating, although they were soon resolved during the operation.

‘Several Issues were encountered during ET/SRB Mate, but were all resolved Saturday night. IPR was generated on Centering Alignment System (CAS). IPR was generated because the technicians were unable to install the FWD shim alignment bolts.’

Atlantis herself is in final preparations for her rollover to the VAB, which includes closeouts and the readiness of retracting the platforms that surround the orbiter in OPF-2 (Orbiter Processing Facility). An Orbiter Rollout Review will be held February 2nd.

‘Final roll preparations, are in work with LO2 and LH2 purge flex hoses and continues with bay-6 platform and mid-deck blow-down preps,’ added the Ops report.

Only minor issues have been noted during these preparations, as would be expected with such a complex vehicle.

‘During the installation of the vendor wire harness identified by this IPR, a bent pin on the cabin fan assembly delta pressure sensor was discovered. Due to the severity of the bent pin and the availability of a spare sensor it was decided to R&R (Remove and Replace) the part. Will remove the damaged sensor and replace it with a spare sensor.

‘Due to this, the vehicle was not powered up yesterday but is scheduled for power up this morning (Tuesday). Retest will follow after power up.’

Meanwhile, Endeavour’s preparations are proceeding on schedule, with the milestone event of her Space Shuttle Main Engines (SSMEs) being installed into her aft a success.

The next event for Endeavour – ahead of STS-118 this summer – will be the installation of her right hand OMS Pod, which is scheduled for Thursday.

**Ride home through the fire and plasma of re-entry with Atlantis on STS_115 – And now also with Discovery on STS-116 – TWO Stunning 2hr, 355mb video – from deorbit burn to post landing**

While Discovery isn’t set to launch for year, post flight processing is proceeding well, with the opposite operations seen on Endeavour being carried out on her older sister, post STS-116.

‘Had good weekend. Did waterproofing shoot this weekend. Are 64 percent complete on roll-in inspection,’ reported Hale’s notes on the Stand-up report. ‘Right Hand OMS Pod must be removed. Will probably transfer this first week in February.’

‘RMS removal. The lid was removed from the box to support RMS removal from the Orbiter yesterday. Removal is scheduled for today, and transport to the lab is scheduled for Wednesday. Station to Shuttle Power Transfer System (SSPTS) structural and electrical modifications continue.’

**INFINITY: 10 minute STS MUSIC VIDEO** –
(Video section is FREE, but you need to sign up as a member of the forum to enter the video section of the site. We only use your e-mail to send you your password. It will not be used for spam etc.)