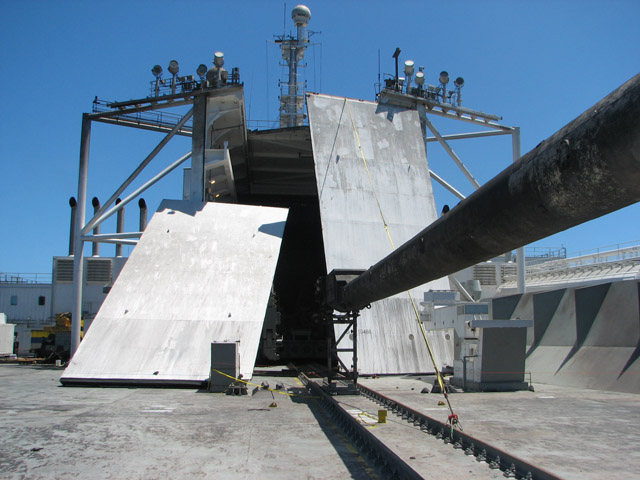 The Odyssey Launch Platform and Sea Launch Commander are heading back to port in California, following the failure of the Zenit 3SL launch last week.

At the same time, an on-going investigation is continuing, with the RD-171 engine turbopump, and a possible failure of the LOX tank’s pressurization in focus, watched closely by Atlas V managers, who are likely to ground their vehicle due to Atlas’ RD-180 core engine commonality with its Zenit counterpart.

**Free WMV and DIVX videos of the failure from T-70 seconds to explosion** Free to all forum members (registration is free – we do not use your e-mail for spam, only to send you your forum password – which is automated). Section includes previous Sea Launch videos:  Sea Launch – XM-4 – Oct 30 and Sea Launch – Koreasat 5 – Aug 22.

The Odyssey – which is likely to require several months of refurbishment work – is steaming home alongside the Sea Launch Commander ship under its own power, after surviving the explosion that claimed the Zenit 3SL and NSS-8 satellite.

Damage observed via images, some of which turned up anonymously on a Russian site, show that the platform did suffer some serious damage to its aft, with the flame deflector and on-deck sliding doors blown off by the explosion. However, the damage was a lot less than feared, baring only a sheen of stinky kerosene soot as visible scar marks all over the platform.

The launch platform itself was soon cleared from any responsibility of causing the failure, with the investigation concentrating on the launch vehicle itself. RSC Energia – who are responsible for the Block DM upper stage on the Sea Launch vehicle – have noted that Ukrainian RD-171 contractor SDO Yuzhnoye/PO Yuzhmash (NPO Energomash) received all the required data on the failure within a few days of the incident.

Source information notes that two areas are believed to be potential early candidates for the failure, with the turbopump on the RD-171 showing anomalous data after initially ‘spinning up’ as expected, and data showing a problem with the LOX tank’s pressurization, soon after T-0, which did see the Zenit lift-off, if only by a matter of a few meters before failing and falling through the pad.

The turbopump potentially ‘letting go’ was initially seen by consulted engineers – before the anomalous data was noted – as they observed a few frames of black smoke pouring out of the lower side of the Zenit’s aft on the launch video.

However, a major failure of pressurization on the LOX tank could also have led to the anomalous data on the turbopump, as a engine shutdown would have been caused by the staving of propellant through the powerful system.

Due to the commonality of the RD-171 and Atlas V’s core stage RD-180, the United Launch Alliance’s upcoming February 23 launch from Cape Canaveral with six satellites for the US Air Force’s Space Test Program-1 (STP1) mission is now under threat of a delay. It is expected that the ULA will postpone the launch until the Sea Launch investigation is completed.

That investigation is continuing away from the public glare for the most part, as would be expected for a commercial launch company such as Sea Launch, who are answerable to their customers, investors/partners and insurers, before worrying about media PR.

That was intimated by Sea Launch’s highly regarded president Rob Peckham, who is tasked with planning ahead to their own return to flight, after the six launches – albeit including the now-destroyed NSS-8 – that were planned for 2007 were delayed until the conclusion to the investigation.

‘We are receiving consistent expressions of confidence in our system and our team from our customers and the insurance community,’ said Peckham. ‘We have begun to discuss a plan for a Return to Flight.

‘The Sea Launch team is the best in the business and will continue to work diligently to understand the anomaly, identify the root cause and determine a corrective course of action. As we move forward, we are maintaining a positive, progressive mind-set and a dedication to excellence.’