STS-124’s mission has begun, following a smooth launch at 5:02pm EDT. This followed an issue-free countdown, aided by all ECO (Engine Cut Off) sensors performing without fault during tanking.

A small foam liberation event at around T+3 minutes is not being classed as a concern at this time, as foam liberation after around 2 minutes 20 seconds usually do not have the ability to cause any damage, should they impact the orbiter. Also, a Left OMS Secondary Gimbal Failure has no mission impact.

Out of the T-3 hour hold, the STS-124 crew are now being ingressed into the vehicle.
No issues – bar one small Ground Support Equipment (GSE) valve (no constraint) – are being worked by the Mission Management Team (MMT).
Successful launch.

Debris event noted, but after ascent time that can cause damage.
LOMS Secondary Gimbal Failure – no mission impact. 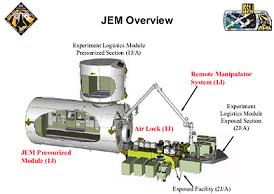 The timeline was recently changed from a 13+2+2 mission in order to accommodate the ISS BCM (Battery Charger Module) R&R. Should the mission change to a Flight Day 4 rendezvous, the BCM R&R would be deleted if margins do not support additional day. An additional day is reserved for post undocking unscheduled events.

‘BCM R&R was originally planned for the 1J stage, but accelerated for earlier return of Tox 4 batteries. BCM R&R will be performed on FD10, one day after EVA-3 and following final Airlock cleanup and EMU transfer.

Interestingly, a problem with the two BCM’s riding on STS-124 was identified recently, which led to engineers spending the past few days identifying a solution. Sources note that a procedure will be in place for the crew to modify the BCMs on orbit in a few days.

Discovery will also be facilitating an Expedition 17 crew exchange – returning Garrett Reisman back to Earth, after leaving STS-124’s Greg Chamitoff on Station.

New operations for this mission includes a LH2 ECO (Engine Cut Off) Sensor Bypass strategy, should failure occurs in OPS-9 and no significant impact to pre-launch timeline. MCC and KSC procedures are in place to support software bypass in both PASS and BFS Flight Software if required.

STS-124 will be the tenth Space Shuttle flight of the IBM ThinkPad A31p PGSC and associated 28V DC Power Supply, the fourth flight of the A31p Docking Station, and the second flight of new Netgear Wireless Access Point.

This will also be the first mission which will involve the use of Mission Control’s ISS Flight Control Room (FCR-1) transitioned to the Linux workstations, which has been long in the planning.

‘The ISS MPSR workstations were transitioned after FCR-1 but will have run time on them prior to the joint mission. Facilities and Network are ready to support.’

Flight Day 2 will involve refined objectives, compared to recent missions, due to the unavailability of an OBSS (Orbiter Boom Sensor System) for Discovery, prior to her arrival at the ISS.

The usual FD2 Orbiter Inspection tasks – or pre-dock inspections – are not possible, due to the OBSS currently being stowed on ISS since STS-123, related to clearance issues with Discovery’s huge Japanese payload and SRMS (Shuttle Remote Manipulator System) elbow camera – which is restrained to prevent contact during ascent.

‘No special attitude maneuvers are required for lighting; nominal attitude and daylight/Earthshine are sufficient

‘RPM photography (during rendezvous) and imagery from ISS cameras (while docked) will be used to supplement the FD2 inspection data.’

An expansion on FD2 will follow during the mission via information in several new presentations acquired by this site.

Now on L2: A stunning 50 minute (1.9gb) high quality camcorder video of a special All Access tour of the VAB, Pad and OPF-3. Get up close with two orbiters, next to the engineers, ride the VAB elevator to the top of the building, walk around the pad and enter OPF-3 to within touching distance of Atlantis. FREE TRAILER NOW AVAILABLE – CLICK IMAGE.

The crew will also be tasked with gaining more data on the orbiter’s freon radiator hoses, which have been suffering from C-bend/Omega-bend issues over a number of previous flights.

‘Crew procedure incorporated into Deorbit Prep checklist to capture imagery of all 4 Freon radiator hoses during payload bay door closure,’ noted another FRR presentation. ‘Per Shuttle Program, this is a highly desired requirement.’

Should Discovery require the alternative landing site of the Edwards Air Force Base (EDW), use of the new, shorter runway will come into effect – as previously reported by this site.

Several other new operation elements are also presented for STS-124, ranging from the modified EVA glove – as previously reported by this site – to new CO2 and Airflow management, Joint Emergency Egress procedures, and JAXA command and control function responsibilities.

Always planned for the mission prior to STS-125’s servicing of the Hubble Space Telescope, ET-128 will debut additional debris mitigation modifications that have been developed as part of Return To Flight efforts.

ET-128 – which will ride with Discovery – will sport the modified LH2 IFRs (Ice Frost Ramps), welcomed after 32 divots and three related LH2 acreage foam losses have been registered since RTF.

The design, currently authorized under contract direction (Task Authorization), replaces Aluminum with Titanium on the LO2 Feedline Yoke, leading to a ‘reduced ice formation, and a secondary benefit of ‘reducing the amount of TPS and reduces possible mechanical interference during articulation due to ice between the yoke/strut and Feedline.’

The ‘robust mats’ holds an element of relation to STS-114, when a large piece of the Protuberance Air Loads (PAL) ramp liberated during Discovery’s ascent. This led to the fleet being grounded while the ramps were removed from all future tanks.

Though never confirmed, it is understood that the PAL ramp liberation was a one-off event, caused by original damage to the ramp at the Michoud Assembly Facility (MAF) being repaired with a patch – as seen in tank processing images – that was of similar size and location to that which liberated via cryopumping from the tank on STS-114.

The damage was, according to sources, was caused by crushed foam underneath the mats used by workers at MAF. With the new mats now in place, that risk has been removed.

Less reported is another change on the tank, implemented to mitigate recurring weld repair-related issues associated with the Al 2195 alloy on the SLWT (Super Light Weight Tank) tank.

This plan included the return to Al 2219 for complex curvature hardware and structural optimization to mitigate weight impact.

This is the second of three phases with the implementation process, first started with STS-116 (ET-123) and due to be finalized on ET-134.

While changes to the tank are all designed to improve safety, engineers have been required to carry out such modifications in tandem with ensuring the overall requirement of the tank is protected.

In certification notes, the recent changes are deemed to have no impacts identified for propellant quality or ice/frost prevention.

A clean flight will add more confidence to the tanks performance during STS-125, which will be without the safe haven of the Station, should serious damage occur with Atlantis.

The performance of sister ship Discovery, and ET-128, will go a long way to provide that increased confidence.