With less than two days to go for the opening launch attempt for shuttle Discovery, STS-124 is now negotiating through the complex ballet of S0007 (Launch Countdown) operations. (Article updated).

With Discovery’s crew now at the Kennedy Space Center (KSC), everything remains on track in the processing flow for the shuttle, with the only item of interest being a waiver that was approved on a ROMS (Right Orbital Maneuvering System) Pod propellant loading violation.

S0007 opened the three day launch countdown at 3pm local on Wednesday, a countdown that consists of a pre-set list of processes to be carried out on the vehicle, all the way down to T-0 on Saturday.

One item that isn’t a nominal element of S0007 has been the late requirement of shipping a replacement toilet for the International Space Station (ISS), which has now arrived at KSC, and was installed into Discovery payload at 3:30am local on Thursday.

Expedition 17 crewmembers have been struggling to fix the current toilet on the Station, following its recent breakdown. Disocovery’s arrival next week will bring welcome relief to those onboard the orbital outpost.

Processing information on Thursday morning noted six new IPRs (Interim Problem Reports) – though all are being cleared and won’t be a constraint to flight. At time of publishing, there are zero Cat 1 constraints for launch.

Not one of the six new IPRs listed in the full report on L2 is a communication issue with a unit on the WLE (Wing Leading Edge) instrumentation, which will undergo troubleshooting on Thursday. However, should that fail, access to the unit will be deferred until after STS-124.

‘Wing Leading Edge instrumentation programming is complete, less unit 1056 (STBD side), (Problem Report) was initiated against this unit. Additional attempts from several pad locations near the wing to communicate with the unit were unsuccessful.

‘Additional troubleshooting from the white room is tentatively planned for today. If unsuccessful, the plan will be to defer this issue until access is available after the flight.’

Also failing to make the IPR list is a closed item on an observation made by one of the pad camera, which spotted a stain on the intertank region of Discovery’s External Tank.

‘During cleaning of one of the pad cameras it was noted that there was a paint/primer stain on the foam surface of the ET-128 intertank. No Problem Report was generated on this issue since it was found to be a previously documented and accepted discrepancy by MAF (Michoud Assembly Facility).’

Of the six IPRs noted on Thursday, only one currently holds a threat to an on time launch, namely the approach lights on Runway 15 of the Shuttle Landing Facility. This requires troubleshooting to allow Discovery to come out of the T-9 minute hold.

‘At the SLF, Rwy 15 approach lights are intermittent and not holding intensity. SLF tower indicates having a panel in alarm with inconsistent lighting,’ added the processing report.

‘(Dept.) reports a cabling problem that must be worked during daylight hours and there is no way to manually control the lights. There has been no impact to STA (Shuttle Training Aircraft) operations. The constraint is to the T-9 minute resume.’

The waiver that has been issued for Discovery’s ROMS is in relation to an incident noted on May 16, when the Pod- used for ascent assists, on orbit burns and the deorbit burn – was loaded with propellant to the two percent level. 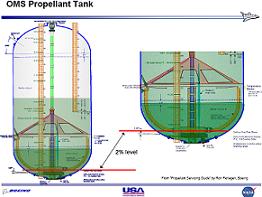 This slow and conservative fill rate of up to the two percent level of the tank prevents any damage to the propellant acquisition system during the initial wetting of the screens, at the beginning of the loading operation.

Strict limits are in place for the flow rate in which the OMS pods are filled. However, this limit was breached for 17 seconds during loading – leading to a ‘non-compliance’.

‘During ROMS fuel propellant tank fill to 2 percent on 5/16/08, initial flow rate exceeded the 4.0 GPM (rate of loading) requirement with a maximum rate of 4.6 GPM for around 17 seconds,’ noted an expansive presentation, available on L2.

‘Reason For Non-compliance: When flow into the vehicle propellant tank is initiated, flow rate control is transferred to the flow meter closest to the vehicle. This resulted in a slight flow rate transient, which promptly came back down to 3.8 GPM.’

The loading to two percent is usually carried out a week or so ahead of completing the process, which – in Discovery’s case – has been completed, with the pressurization for flight.

The requirement of a waiver related to concerns that the increased flow rate may have caused damage to the propellant acquisition screens of the collector assembly, namely the arrestor screen and band screen.

The collector assembly is part of the OMS tank propellant acquisition system. It is divided into an upper and lower assembly by a radially pleated gas arrestor screen.

The upper assembly directs flow through the gas arrestor screen, which traps gas bubbles – stopping them from migrating into the engine feed lines. It also delays gas ingestion during final depletion.

Protecting these critical systems from damage are rules set out in the Operational Maintenance Requirements and Specifications Document (OMRSD). Hence, the breach of the rules caused the need for a waiver – without which Discovery can’t launch.

Clearing the Right OMS to fly, engineers outlined their rationale, via previous flow and flight history, in a fascinating overview of their knowledge base when it comes to the orbiter’s systems.

‘The slightly higher flow rate experienced for this tank during initial fill (4.6 GPM), is insufficient to cause damage to the collector screens,’ noted the associated waiver. ‘Maximum screen delta pressures during the subject condition were well below the ultimate capability limit of the screens.

The wavier showed how the rationale behind claiming no damage could have been caused by the breach of the flow rate rules, was due to the only previous documented damage occurring via flow rates that were massively higher than noted with Discovery’s STS-124 incident.

‘The failures of the two gas arrestor screens were a result of excessive propellant flow rates (200 GPM) into the tank that resulted in the bulging of the screen and ductile failure at the screen coined/uncoined transition,’ added the waiver.

‘Transient computer analysis conducted during failure analysis on these PDSW screens concluded screen ultimate load capability would be exceeded at fill rates greater than 30 GPM under slam conditions or 88 GPM under flow conditions.

‘Risk analysis based on previous screen failures early in the Program indicates the likelihood of failure is highly unlikely.’

The conclusions drawn from engineering history showed that damage to the screens located in the area of the two percent loading is unlikely, given the maximum screen delta pressures were well below the ultimate capability limit of the screens. 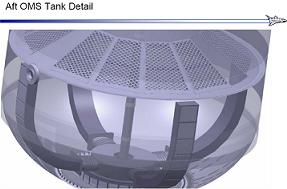 To cause damage, the flow rates would have had to exceed 30 GPM under ‘slam’ conditions or 88 GPM under normal flow conditions. Any confirmed damage would require the OMS tank to be replaced.

Enabling the waiver, the decision was made to increase the limits set out in the OMRSD, thus bringing the flow rate experienced with Discovery to well below the new maximum. This new limit will be set at 10 GPM.

No reference is made as to why 10 GPM has been chosen. However, additional notes in the overview presentation associated with the waiver gave some insight into what this new OMRSD limit was based on.

‘A similar loading issue also occurred during the STS-115 flow, caused by a GSE hardware failure which resulted in an initial fill rate of 8.1 GPM. Pod flew the mission with no issues,’ added the presentation.

‘Risk analysis based on previous screen failures during Qualification testing indicates the likelihood of failure is highly unlikely.’

While the requirement of waivers is commonplace in the shuttle program, this particular example shows that even after 25 years of flight, preset requirements can remain flexible, when based on sound engineering knowledge and flight history.

This process of refinement, whilst keeping safe flight as the centerpoint for any changes, is likely to continue all the way until the final flight of vehicle.