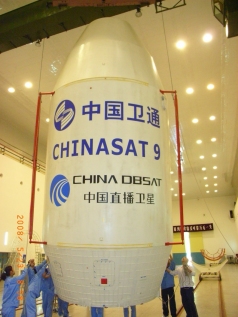 The third Chinese launch of 2008 has seen the ZX-9 ZhongXing-9 – or ChinaSat-9 – launched into orbit at 12:15 UTC from the XiChang Satellite Launch Center, on the earthquake plagued Sichuan province.

The launch was carried out by a CZ-3B Chang Zheng-3B (CZ3B-10) launch vehicle, from the LC2 launch complex.

ZhongXing-9 was built by Thales Alenia Space and is based on the Spacebus-4000C2 platform. It will be operated by the China Direct Broadcast Satellite Co Ltd.

With an operational life of 15 years, it will broadcast to 98 percent of the Chinese population, including Hong Kong, Macao and Taiwan. Those in the area of coverage will receive up to 200 standard-definition and high-definition channels using small antennas 0.45 to 0.60 meters long.

There are more than 378 million households in China, with 140 million consisting of TV cable users, with another 378 million able receive radio and TV programs through wireless services. ZhonhXing-9 coverage will allow give most of the Chinese population an ability to watch the Beijing Olympic games.

Like its Xinnuo-2 predecessor, ZhongXing-9 uses the ABS-S (Advanced Broadcast System-Satellite) that permits a 30 percent boost on the transponder bandwidth efficiency.

By 2010, the China Direct Broadcast Satellite Co Ltd plans to launch the Xinnuo-4 (Sinosat-4) and the Xinnuo-6 (Sinosat-6) satellites to augment its broadcast capacities.

The contract for the construction of ZhongXing-9 was signed in April 2005, with the launch contract finalized on November 9, 2005 between the China Great Wall Industry Corporation and the China Satellite Communications Corporation.

The satellite was originally scheduled for launch in the second half of 2007.

The launch campaign started on May 5th, when the satellite was delivered to the XiChang Qingshan Airport by an Antonov An-124.

On 12 May, a 8.0 magnitude earthquake hit the Sichuan province. However, the XiChang Satellite Launch Center escaped damage, permitting the launch campaign to continue.

Initial reports pointed to a June 22 launch date, but more recently official media reported that the launch would take place on June 6 or June 9.

The CZ-3B Chang Zheng-3B rocket is a three stage launch vehicle, developed to meet the demand of the of worldwide communications satellite market. Its development started in 1986, based on the flight proven CZ-3A Chang Zheng-3A, and is the most powerful launch vehicle in Chinese rocket fleet.

Based on the CZ-3A Chang Zheng-3A, the vehicle has the core stage strapped with four liquid boosters on the first stage.

The development of this launch vehicle is based on extensive heritage and flight proven technology of Long March family of launch vehicles. It is dedicated for launching heavy communications satellites of up to 5,100kg on GTO missions.

This was the 10th CZ-3B launch, the 108th successful Chinese launch, and the 107th launch of the Chang Zheng (Long March) launch vehicle family.

2008 should see the launch of Shenzhou-7, crewed by three yuangyuans. One of the crewmembers will make the first extravehicular activity (EVA) of the ambitious Chinese space program. Launch is schedule to take place between 12 and 14 of October.

The next Chinese launch will probably take place between July and August, when a CZ-2C Chang Zheng-2C rocket will orbit two Huan Jing (1A and 1B) remote sensing satellites, from the Taiyuan Satellite Launch Center.

The main purpose of XiChang Satellite Launch Center is to launch broadcasting, communications and meteorological satellites, into a geostationary orbit. It has been purpose built to win launch contracts from current providers.

Located in the Sichuan province in south-western China, the launch center has its headquarters in XiChang City, 65 kms from the launch site. The launch center his equipped with two launch pads. The climate of XiChang region is subtropical, with an average temperature of 16 degree C.

XiChang Airport is situated in the northern suburbs of XiChang, which is 50 kms from the launch site. The airport runway is 3,600 meters long, capable of handling large transport aircraft. Both the national Chengdu-Kunming railway and the Sichuan-Yunnan highway link to launch center.