Discovery has docked with the International Space Station (ISS) on Flight Day 3 of STS-124’s mission. Prior to linking up with the Station, Discovery performed the Rbar Pitch Maneuver (RPM), which will allow for extensive imagery of her Thermal Protection System (TPS).

Following docking, 41 foot of ducting will be networked between the ISS and Discovery, part of a plan to mitigate CO2 symptoms noted by the STS-123 crew.

Pad 39A was badly damaged during Discovery’s launch on Saturday. Exclusive Hi Res Images of the damage are available on L2 (from inside the pad).

Those images show hundreds of bricks literally blown out from the sidewalls of the flame trench by the shuttle’s thrust on lift-off. Large amounts of bricks and concrete are also observed scattered around the pad, with some even thrown into the water behind the pad.

The perimeter fence has been damaged and bent backwards in places, along with damage to a large section of the pad’s north slope – which suffered a bulging blowout.

Evaluations have only just started on assessing the extent of the damage, noted as the worst seen since an early shuttle launch in the 1980s. More will follow on this story.

In other news, the latest anomaly reports note Main Fuel Valve skin temp 2 failed off scale high on SSME 1 (Space Shuttle Main Engine) during ascent, with the same engine also suffering from erratic behavour with it Power Supply Electronics (PSE) temp over a period of two minutes of powered flight.

The RPM – Rbar denoting along the radius vector of the ISS, downward – allows the ISS crew to perform a high resolution photo survey of the lower surface thermal protection system (TPS) tiles to screen for ascent debris damage.

The significance of this mission’s RPM has been increased by the unavailability of Flight Day 2’s use of the OBSS (Orbiter Boom Sensor System), meaning only a partial scan of Discovery’s TPS has been carried out by the time the orbiter arrives in the vicinity of the ISS. 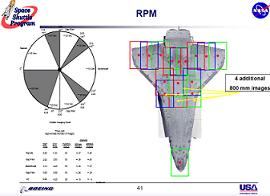 They were tasked with the limitations on crew and sensor visibility, maneuvers conducted about an unstable orbital stationkeeping position, inherently unstable attitude dynamics, thruster plume impingement on the ISS, shuttle propellant limitations, and a very tight set of lighting and geometry constraints for the inspection photography.

That photography will be downloaded to engineers on the ground, who will carry out what is now a well rehearsed exercise of checking through all areas of Discovery’s TPS for any areas of concern.

Following docking with the ISS at around 1:54pm EDT, hatch opening is expected at around 3:10pm, allowing the greetings to begin between the crews of STS-124 and Expedition 17.

This will be followed by Safety Briefing (4:02pm) and Soyuz seat liner transfer for the Garrett Reisman/GregChamitoff exchange – and preparations for the first spacewalk for Mike Fossum and Ron Garan on Wednesday, preceded by their overnight Campout in the Airlock (A/L) for denitrogenation/pre-breathe.

The subject of airflow and air quality has increased in importance, following notes from the previous mission (STS-123/Endeavour), and a drive to improve the overall CO2 levels – and shuttle ventilation when docked.

‘Several procedural and equipment modifications are being implemented to improve overall CO2 levels and airflow across the joint stack,’ noted a Flight Readiness Review (FRR) presentation on the subject. 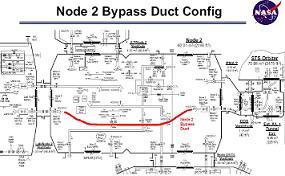 ‘Airflow management: ISS will install 23 ft bypass duct between Node 2 and U.S. Lab. Orbiter will install 18 ft Spacehab duct to supply cabin air to Booster Fan, allowing conditioned air to be used by Orbiter crew rather than sending it all to ISS.

‘ISS portable fans will be available for use on Orbiter (extra batteries manifested). Orbiter mid-deck is configured to allow OCAC (Orbiter Cabin Air Cleaner) reversal as an available option, although this is not nominally planned.’

The ISS will also have capability to increase CDRA (Carbon Dioxide Removal Assembly) blower speed and lower temperature to improve CO2 removal if additional CO2 reduction is needed. Also, full crew conferences will be scheduled elsewhere than the Orbiter mid-deck.

These procedures were added after the STS-123 crew reported several instances of CO2 symptoms – shown via crew metabolic rates that were higher than Shuttle baseline (though normal for an ISS baseline). These symptoms were noted on Shuttle, but alleviated when the crew was on ISS.

This wasn’t an unique event on a shuttle mission – having previously been noted on a number of post-Columbia missions – where on each occasion the situation has improved when docked with the ISS.

‘Previous flight history has shown that ISS has been effective in scrubbing Orbiter CO2,’ added the FRR presentation. ‘From STS-114 through STS-118, the baseline configuration had the Booster Fan bypassed as a DTO (Development Test Objective/Detailed Test Objective) to reduce power consumption.

‘In 2007, a review of CO2 issues concluded that Orbiter middeck airflow was the likely culprit of CO2 symptoms. Crew reports noted that symptoms improved/cleared on ISS. CO2 levels between Shuttle and ISS were similar. Review direction was to reactivate the Booster Fan starting on STS-120 to help middeck airflow.

‘Studies of longer term middeck airflow improvements were also initiated. Since STS-123/1JA, multiple forums have been working towards improving ISS and Orbiter airflow and CO2 management. Recommendations from these forums were brought to the April 15 CO2/Airflow Splinter Meeting.’

Those recommendations included the implementation of a process improvement, notably to have the flight surgeon review crew medical data pre-flight and inform EECOM (Emergency, Environmental and Consumables Operation Manager) if metabolic rate is expected to be above the baseline numbers.

Helping the situation on the orbiter would be the return to replacing the LiOH (lithium hydroxide) canisters on the orbiter middeck on more than one occasion – once being the baseline for the docked stage since Return To Flight.

However, STS-124’s alternative solution is due to the problems related with increasing the number of changeouts of the LiOH canisters – used to control the CO/d2 levels in the orbiter – as noted by a PRCB (Program Requirements Control Board) meeting in 2007.

This followed the discovery that the dust in the canisters was causing respiratory irritation for crew members who worked in the near vicinity (on the middeck), as noted by crew members on STS-114, STS-115 and STS-118.

The PRCB meeting resulted in crew members having face masks onboard for changeouts of the canisters – along with increased training on the process.

So shuttle managers have decided the best solution involves the installation of the ducts between the two vehicles, allowing the ISS to ‘scrub’ Discovery during her stay.

‘In order to maintain Orbiter CO2 levels, without resorting to additional Orbiter LiOH, delta ppCO2 between the Lab and the Orbiter needs to be reduced,’ added the FRR presentation. Most effective method to drop the delta ppCO2 between Lab and Orbiter AND Lab and Node 2 is to ‘bypass’ Node 2 by directly mixing Orbiter and Lab.’ 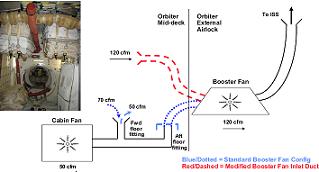 For Discovery, the new middeck booster fan inlet duct configuration will be used to improve middeck airflow and to eliminate fresh air being sent directly to ISS.

The presentation noted that the previous review of past flight data has shown that there can be pockets of elevated CO2 on the middeck caused by poor airflow, claiming the middeck has become much more crowded with stowage, creating ‘dead zones’.

It also noted that less than half of the total orbiter airflow mass passes through the middeck (most of the air returns are located on the flight deck. The solution, an 18 foot long duct previously used on a SpaceHab module.

‘A new duct will be used to supply only mixed middeck air to the booster fan inlet. 18 foot 4-inch duct scavenged from SpaceHab. May be stowed on ISS in between assembly flights. 50 cfm cabin fan airflow will be added directly to the middeck, providing better mixing as well as an additional middeck source of conditioned air.’

‘Use ISS portable fans (MRK fans) on middeck: Sufficient batteries were added to STS-124/1J Shuttle manifest to allow crew to use portable fans at their discretion to affect localized airflow

Overall, engineers believe they have a CO2 and airflow management solution for this mission, though evaluations ‘will continue during and after STS-124, with the goal of ultimately eliminating these issues for the duration of the Shuttle Program.’

This article will be updated throughout docking.