JLP relocated as STS-124 remains free of any major issues

Another successful day in space for the STS-124 docked stage with the International Space Station (ISS) has seen the relocation of the Japanese Logistics Pressurized Module (JLP) from Node 2 to the JPM (Japanese Pressurized Module – Kibo). The module’s robotic arm will be checked out during Flight Day 8.

STS-124 is continuing to be mainly issue free, with only around five items being noted – all of which hold no impacts to the mission.

Such were the delicate operations involved with this maneuver, no exercise on the Station was allowed from the 3rd set of bolts until the capture latches were deployed.

The SSRMS then unberthed, relocated, and installed the JLP on top of the JPM (Japanese Pressurized Module). 1st and 2nd Stage capture occurred before the SSRMS ungrappled the JLP and maneuvered to a JEM RMS (Remote Manipulator System) Deploy Viewing position.

Before the JLP Vestibule Pressurization and Leak Checks, the PPRV (Positive Pressure Relief Valve) sample cap was removed. Following the completion of all bolts – 60 minutes after A-bolts – the pressurization began. A Fine Leak Check will be setup for overnight and terminated the next day.

Flight Day 7 also includes a series of activities, starting with ‘JEM RM FINAL Activation Part 1’. This will complete the activation and checkout of the JEM RMS.

EVA-3 on Sunday may now include a revisit to the port SARJ (Solar Alpha Rotary Joint), in order to collect a sample of what appears to be grease on the race ring. Engineers want to know if there is a potential failure mechanism involved with the leaking of the grease.

Later, Discovery will take over attitude control of the Shuttle/Station for the maneuver to the water dump attitude, followed by preparations for the JEM RMS Initial Deploy and JLP vestibule outfitting.

The outfitting of the newly relocated JLP re-establishes telemetry and heater power to the module. There is a 65 hour thermal limit that started just prior to JLP vestibule de-outfitting on Flight Day 7.

Under evaluation is instrumentation on Fuel Cell 3’s H2 flowmeter and FC3 cell performance monitor (CPM), which was lost – possibly due to a common fuse may have opened.

The loss of insight into the health of Fuel Cell will lead to engineers on the ground utilizing alternate methods to verify fuel cell purge and health.

The mission is continuing to proceed in the style of Discovery’s processing flow, which enjoyed a record low number of issues – called IPRs (Interim Problem Reports) – with only a handful of items listed on the mission’s ‘funny’ – the term used for issues – list.

Issues range from the simple implementation of a towel around a leaking galley on the orbiter, to a redundancy issue with one of the Orbiter Boom Sensor System (OBSS) elements – all of which have no mission impacts.

‘The STS-124 crew reported a small amount of water leaking from the base of the needle on the SORG (Shuttle Orbiter Repackaged Galley) beginning with its first usage,’ explained a status report from the Mission Evaluation Room (MER). ‘Leakage occurs only during dispense of water from rehydration station.

‘Crew estimates that over the course of one day’s usage, approximately 8 oz of accumulated water leakage occurred. The leak was described as minor and is currently controlled by using a towel.’

While post-undocking late inspections can still take place without any detrimental problems to the scanning of Discovery’s Thermal Protection System (TPS), the issue with the OBSS’s Laser Camera System (LCS) remains under investigation. 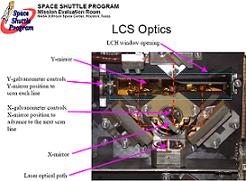 ‘Error messages were received during the STS-124 Flight Day 5’c LCS Checkout,’ added information on Friday. ‘The checkout included three scans of the underside of the nosecap and some surrounding tile.

As observed ahead of EVA-1, Mike Fossum’s preparations to head into the Quest airlock were slightly delayed by the need to changeout his Communications Carrier Assembly (CCA).

The CCA is a fabric cap worn by the astronaut. It contains microphones and speakers for use with the radio. It allows hands-free radio communications within the suit.

The problems with the CCA was observed with Fossum’s communications, which were considered to be weak. This has led to a decision to bring home the CCA for troubleshooting.

As is commonplace for a shuttle mission, the orbiter’s WLEIDS (Wing Leading Edge Impact Detection System) has been ‘triggered’ on orbit. Such triggers usually aren’t related to an impact, though engineering evaluations will always take place to confirm.

The trigger is being classed as a 1.4G event on the Starboard RCC (Reinforced Carbon Carbon) panels 14/15, and could be as high as 2.3G if at the apex of the RCC. However, even 2.3G – if an impact – is very unlikely to have the force to cause any damage.

The panels will all be checked over in depth by the late inspection scans by the OBSS.

One of the first issues noted during the mission was the Secondary Left Pitch and Yaw OMS (Orbital Maneuvering System) Actuator Position Fail problem, when secondary position sensors on the left OMS actuator exhibited a short transition to zero.

These position sensors provide feedback to the OMS actuator control loop, with a loss of the sensors causing improper operation of the OMS actuator when commanded on the secondary controller. The primary sensors are in good health, with the issue relating only to a lack of redundancy.

Engineers currently believe the fault is ‘most likely an open circuit in, or to, the power supply to the OMS controller.’

‘A nominal dual OMS engine de-orbit burn is planned with the left Orbital Maneuvering Engine (OME) already parked through the nominal end of mission center of gravity. Right OME is being used for subsequent OMS burns.

‘Loss of a single OMS controller is not significant. The OMS engines performed nominally during ascent and OMS 2 and the primary channel is functioning nominally. Controllers are completely independent; no concerns for cascade failures.

‘Current plan is to not use the left secondary controller for the remainder of the flight – no benefit to further troubleshooting. Will remained parked, pointing through the Center of Gravity.’

Once home, engineers in her Orbiter Processing Facility (OPF) will troubleshoot the issue ahead of her next flight on STS-119 next February.