STS-124’s busy schedule for Flight Day 4 is coming to a close following EVA-1, which was conducted by Mike Fossum and Ron Garan – who helped prepare Kibo for its installation on the Station, and found that the SARJ Starboard SARJ (Solar Alpha Rotary Joint) appears to have a divot in the race ring.

Meanwhile, the Mission Management Team (MMT) have concluded that no Focused Inspection will be required on Discovery, after imagery evaluations showed she had only suffered four small minor areas of damage, all of which have been cleared for re-entry.

EVA-1’s inspections of the Starboard SARJ (Solar Alpha Rotary Joint) has shown that the area of interest on the Race Ring is a depression – as opposed to debris, which is unfortunate news.

In some of the most amazing views ever seen during a shuttle mission, JAXA’s Kibo has successfully been transitioned from Discovery, to become part of the ISS.

the pad damage sustained by Pad 39A has revealed the metal tabs anchoring the bricks to the flame pit are severely corroded and or missing, according to investigation notes on Tuesday.

Tens of exclusive images of the damage sustained by Pad 39A since Sunday have given an insight into the amount of work required to get the pad back to an operation status. However, the opening investigation notes, also acquired by L2, have provided the first documented overview of the immediate work ahead.

‘A 100′ X 20′ section of the east wall of the north flame trench sustained severe launch damage,’ investigation notes revealed. ‘Broken sections of the flame trench wall were scattered from the flame trench to the pad perimeter fence. The area is under controlled access until the debris is removed.

The wall is being inspected by USA Structures and NASA Structures engineers, who have already noted that the pad’s 3” by 4” metal tabs that are used for anchoring the bricks to the concrete are ‘severely corroded and or missing.’

The remaining brickwork may have to be removed, as the wall is ‘judged to be unstable at this time,’ though the process of replacing the bricks is still being evaluated.

‘The bricks from the wall are Apollo-era and are no longer available; as a result, the team is consulting with the manufacturer and repair options are being investigated,’ added the investigation notes. 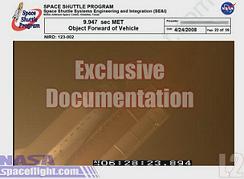 Work will continue on Tuesday, with a path being cleared of bricks and concrete debris for access to the flame trench. This will be followed by clearing the paved areas.

On Wednesday, evaluations into the damaged wall will continue, with engineers also attempting to stabilize any of the remaining bricks to allow for an asbestos crew to remove/contain the hazardous material in the exposed sections of the wall.

Later, a weighted roller will push the remaining debris – some of which flew over a 1000 feet – down into the soil. (More to come on this story as notes continue to arrive during Tuesday).

Fossum and Garan are conducting a 6hr 30min spacewalk on the first of three EVAs scheduled for STS-124, with three major tasks being undertaken.

Their tasks include the release of the SRMS (Shuttle Remote Manipulator System) elbow camera launch lock and transfer of the OBSS (Orbiter Boom Sensor System) from ISS to Shuttle.

The spacewalkers will also check out MCAS RTL (Mobile Servicing System Common Attach System/Ready-to-Latch) operation – in preparation for ULF-2 – including the opening of the Node 2 nadir hatch window cover.

In readiness for the installation of Kibo, the EVA will include the preparation of the Node-2 port ACBM (Active Common Berthing Mechanism) for JPM install.

Preparations will also include the disconnect/stow of the LTA (Launch-to-Activation) cable, remove Passive CBM contamination covers, and the release of the JPM forward window launch lock. 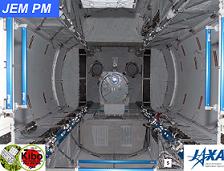 Kibo, or the JPM (Japanese Pressurized Module), will be the largest habitable module on the space station and is equipped with its own airlock
and robotic arm for external experiments.

Its RMS (Robotic Manipulator System) main arm can handle up to 14,000 pounds of hardware. The small fine arm, when attached to the main arm, handles more delicate operations. Each arm has six joints that mimic the movements of a human arm.

‘Although our Japanese colleagues had officially joined ISS operations with mission 1J/A when their Japanese Experiment Logistics Module, Pressurized Section â€“ called the JLP/JLM – was installed,’ noted a memo to NASA managers, ‘they will really hit the ground running after installation of their Kibo laboratory (named for the Japanese word for ‘hope’),’

Also a major element of EVA-1, the continuing work on the troublesome Starboard SARJ (Solar Alpha Rotary Joint). The spacewalk will involve the Inspection of the Datum A surface, perform SARJ cleaning test; and install the TBA-5 (Trundle Bearing Assembly 5).

This is part of an expansive forward plan for the aim of a transition to ‘outboard operations’ on the ISS. This was due to happen during STS-126, but has now been deferred to STS-119 – currently set to launch in February, 2009.

‘STS-124/1J has picked up the task of installing TBA (Trundle Bearing Assembly) 5. During STS-123/1JA EVA 5, there was some concern with the crew’s observations and the photographs taken of the suspect area on the Datum A surface,’ noted the current forward plan – part of L2’s 200mb SARJ Issue ‘One Stop Shop’ section. ‘While the crew described the area as a ‘divot’, the imagery analysis team did not concur.

‘If it is a divot, there is a concern that the Datum A surface is starting to spall just like the outer canted surface. Once spalling begins, it will likely spread to the rest of the Datum A surface rather rapidly. If that occurs, the overall friction during SARJ rotation will likely go up and there is concern that the force required for rotation may be greater then the current available to drive the motor.

‘Therefore, the SARJ Team may recommend a re-inspection of this area (with appropriate inspection tools) during the STS-124/1J mission. The priority of this Datum A inspection in comparison to the TBA installation was discussed at the SARJ meeting and the current opinion is that the Datum A inspection is a higher priority.’ 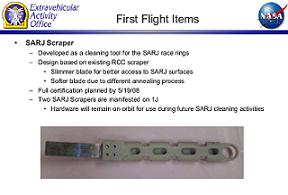 The cleaning test objective element of the SARJ work during EVA-1 will help evaluations on the viability of carrying out more intensive cleaning efforts on the race rings.

‘Two SARJ Scrapers are manifested on STS-124. Hardware will remain on-orbit for use during future SARJ cleaning activities.’

Garan and Fossum will also debut a new modification to the EMU (Extravehicular Mobility Unit) gloves they will use during their three EVAs.

This comes in the form of Turtleskin patches, sewn into the thumb and index finger regions of the gloves, a modification that is classed as an alternative to the overglove protection – which was implemented following a number of worn and cut glove incidents.