Following evaluations on Discovery’s Thermal Protection System (TPS) via Late Inspection data and imagery, engineers on the ground have presented the Mission Management Team (MMT) with a clean bill of health for the orbiter.

The crew are enjoying a day off duty in space during Flight Day 13, with no issues reported on the veteran orbiter that has performed superbly during her STS-124 mission.

During Flight Day 12, the OBSS was be used for the first time in the mission – following its retrieval from the ISS after it was stowed at the end of STS-123 – for Late Inspections.

The procedure saw several changes to accommodate the need to conduct a complete scan of the Discovery’s heat shield, this includes a request from the crew not to call the procedure ‘Late Inspections’.

‘Inspection procedures will be executed as if they were performed on FD2. Wing glove and crew cabin portions of survey will be performed (usually FD2 only),’ noted documentation associated with the OBSS plan.

‘Crew requested that the post-undock surveys not be referred to as Late Inspection to avoid inadvertently performing callouts to skip steps for ‘Late’ inspection.’

The OBSS helped double check an area of the RCC panels on her Wing Leading Edge, which avoided the usual ‘full scan’ via Flight Day 2 and 3’s inspections via the Remote Manipulator System (RMS) and RPM.

The scans from the RCC panels were the first set of results that went under the evaluations of the Damage Assessment Team (DAT). 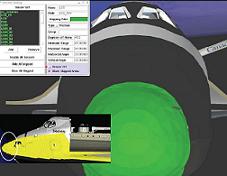 In addition to Late Inspection procedures, an extra flight day has been added to the mission timeline to provide enough time to analyze the OBSS data, which started to undergo the major process of evauation shortly after the end of the scans on Wednesday.

‘The Damage Assessment Team requires 34 hours from the start of the inspection to ‘clear’ the Shuttle for landing,’ noted documentation.

‘This is longer than the standard 26 hours required for late inspection analysis because a full inspection was not completed earlier in the mission. An additional post undocked day is required for analysis and to allow adequate reaction time.’

Shuttle managers expect to gain the final results of the OBSS scans ahead of Thursday’s Mission Management Team (MMT) meeting.

Those results are already positive, with a Flight Day 13 presentation showing Discovery has passed through the evaluations on the critical areas of her TPS with flying colors.

‘TPS Late Inspection Coverage: TPS is Clear for Re-entry,’ noted documentation on Thursday (available in L2). ‘TPS Community has assessed the small area of upper carrier panel that was missed. Inspection imagery shows that all tiles are installed and no large damages exist.

The OBSS has now been stowed for re-entry on Saturday.

The relaxed nature of the crew during the OBSS scans was apparent, when clips of video taken onboard Discovery during the Late Inspections showed one of the crew playing a game of ‘peek-a-boo’ with the OBSS cameras.

‘How you doing?’ was heard in the short clip, as the astronaut impersonated Joey from the sitcom Friends, as the OBSS camera peered into the crew cabin, followed by ‘I can see you!’

‘The purpose of any mission is to get a cool crew video,’ CAPCOM could be heard saying in response to the short clips, ‘and I think you’ve done very well on that!’

Discovery’s undocking was followed by a stunning flyaround of the growing facility. .

The ‘midnight’ undocking of Discovery was timed to ensure good lighting for the subsequent flyaround. Discovery was ending a docked stage of over eight days and 17 hours.

While the one lap flyaround of the ISS is always stunning, it aides engineers on the ground with a 360 degrees-worth of imagery of the Station. However, with the newly added Kibo module, the growth of the Station is visually impressive.

(See Live Coverage Pages, linked above, for a hundreds of screenshots from the undocking and flyaround).

Following the flyaround – which was ably carried out by pilot Kenn Ham, who used less prop for the 360 degree lap of the ISS than controllers on the ground had expected – Discovery fired her Reaction Control System (RCS) for the first separation burn.

Discovery is returning Garrett Reisman from his stay onboard the ISS, leaving former STS-124 crewmember Greg Chamitoff as his replacement.

‘Discovery departing after a successful mission, leaving behind great hope, Kibo,’ said Chamitoff over the loop as Discovery left the Station.

‘The whole mission was very successful, we’re sad to see you go, but we’ve got great pictures, and we’ll see you on the ground!’

Issues with the vehicle remain to be few and far between, with only 11 items on the Mission Evaluation Room (MER) ‘funny’ report, following the addition of a MPS (Main Propulsion System) LH2 engine 2 pressure transducer shift – discovered during post-launch data review.

Out of the 11 items on the MER list, none hold any mission impact, and several – such as a headphone microphone – are not going to require any further evaluation.

‘Loss of Fuel Cell 3 Cell Performance Monitor (CPM) and H2 flow meter – the four measurements went off scale low at the same time,’ noted another item on the list. ‘The work around for the loss of the H2 flow meter is to use the O2 flow meter to monitor purges and to use tank quantities to check for leaks.’

Another item also holds no concerns, and will be dealt with once Discovery is back in her ‘barn’ (Orbiter Processing Facility) next week.

The crew are enjoying a day off duty on Thursday, ahead of the regular checks being carried on Discovery’s critical systems for re-entry on Friday.

Discovery is targeting a landing at the Kennedy Space Center on Saturday, weather permitting.