With Discovery back home, all three Orbiter Processing Facilities (OPFs) at the Kennedy Space Center are busy processing their respective birds.

Endeavour and Atlantis are both at the business end of their parallel flows for their roles associated with STS-125, with Space Shuttle Main Engine (SSME) installation already completed on OV-104. Endeavour’s engines are ready for installation into the orbiter – starting June 30th, while Discovery’s SSMEs will be removed on June 25.

Discovery is currently jacked and leveled in her OPF for the offloading of her cryogenics and a closer look at the condition of her Thermal Protection System (TPS). 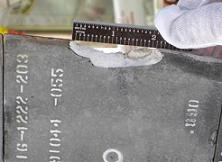 Those TPS inspections will continue all week, though the initial reports compiled on the runway noted 102 lower surface hits, of which only 11 were greater than an inch.

A number of those hits would have been suffered by Discovery during her landing and rollout on the Shuttle Landing Facility’s runway.

‘Two skips and two stamps after initial skid. First was a skip of 12 feet in length followed by a stamp 19 feet long, then second skip was 73 feet long, followed by 544 foot long stamp which was only about two inches wide,’ noted the engineering landing report.

‘One interesting observation was that the initial skids were nearly on top of the STS-123 skid-marks.’

Everything about Discovery’s landing was ‘in family’ – which has proved to be encouraging due to a number of ‘first flight’ items relating to the Main Landing Gear (MLG).

‘Some minor condensation was noted on both MLG struts, typical for amount of humidity on the day,’ added the expansive report. ‘A minor amount of Carbon Brake dust was noted on all four MLG wheel rims, seemed less than typical.

Other work taking place this week on Discovery involves the de-configuration of the orbiter’s mid-body and the opening of her payload bay doors – the latter aiding checks on her four radiator retract hoses.

‘Radiator flexhose inspections/photos are completed with the exception of the port aft hose,’ noted processing information. ‘The remaining flexhose will be inspected during payload bay door ops.

An item of interest during STS-124 was the failure of the secondary controller on the left TVC (Thrust Vector Control) OMS (Orbital Maneuvering System) engine during ascent.

This is being investigated in Discovery’s OPF, though no issue has yet been found with the controller that strangely started to work again 90 seconds ahead of landing.

‘OMS TVC measurement that was lost on ascent came back just before touchdown,’ noted JSC’s Orbiter Project. ‘Troubleshooting on the left OMS engine did not reveal any issues. Engineering is evaluating further troubleshooting.’

Praise has been noted for the engineering team that worked on the faulty MDM (Multiplexer/Demultiplexer) card (FA2), which was responsible for causing an off-nominal 2-1-1 spilt of Discovery’s General Purpose Computers (GPCs) during her pad flow.

The card was removed from Discovery, with subsequent re-testing clearing the orbiter to launch on schedule. However, as per typical for how engineers deal with problems, the issue was fully investigated.

‘Prior to STS-124 had an FA2 MDM failure. Localized it to S-Mia card. Depot Team determined had a bad diode already on S-Mia. Looks like a random avionics failure and not anything fleet-wide,’ added JSC’s Orbiter Project.

‘Great job by team reaching resolution so quickly. Sometimes it takes many months to find a failure on an avionics component.’

Discovery will continue post-flight processing for some time, with SSME removal on June 25, prior to heading into a long flow towards her February launch date for STS-119.

Atlantis’ flow towards the flagship STS-125 mission continues to be well within the timeline. Most of the work being conducted on the orbiter relates to critical path work on her TPS and the leak checks on her three newly installed SSMEs.

‘Majority of critical path work is TPS. TPS on nose landing gear is configured. Doing mechanical checks to ensure everything is aligned,’ noted KSC Ground Operations. ‘On ET doors, thermal barriers are being installed and fit checks are in work.

‘This leads to landing gear and ET door functionals in a couple of weeks. Are in good shape there. Have 23 TPS cavities bonded and 168 cavities total.’

STS-125’s set of boosters are also undergoing final checks and closeouts, following the completion of stacking in the Vehicle Assembly Building (VAB) earlier in the month.

TPS is the main focus of attention with Endeavour, as she’s processed in parallel with Atlantis for LON support (STS-400) – ahead of her primary mission, STS-126.

Stood down from an emergency timeline to support STS-124 – following Discovery’s heatshield clearance on orbit last week – Endeavour recently underwent a successful removal and replacement of Auxiliary Power Unit (APU 3). This will require a hot fire test on the pad.

Her flow timeline remains well within the requirements for supporting LON support of Atlantis, with TPS work progressing to 90 cavities remaining for repair, out of an initial post STS-123 total of 125 cavities – a low count following her ‘clean’ flight earlier this year.

Comm system audio/video interface testing has been completed successfully, while standard mixed cargo harness (SMCH) reconfiguration continues all week in the midbody. Rudder/speedbrake block seal R&R has been rescheduled for later this week.

The radiator retract hoses gain a mention again via Endeavour’s flow, this time relating to a starboard aft hose – one of four freon-carrying hoses located in the orbiters – which has suffered some damage. At present, it appears the hose will still be ok for one more flight.

‘Had an OPO (Orbiter Project Office) Tech Tag-up last week to review radiator retract hose on OV-105,’ added the latest Shuttle Stand-up/Integration report. ‘This is the starboard aft hose that had damage which is more excessive than seen in past.

A highlight of Endeavour’s near-term flow will be the installation of her three SSMEs at the end of the month, meaning a total of nine engines will have been involved in various orbiter operations during the month of June.

‘On OV-105, will do engine installation on June 30. The three engines are in engine shop,’ noted Pratt & Whitney Rocketdyne/KSC. ‘On Engine 2047, finished big can leak check, which was good. Are in final walk downs from this.

‘Engine 2052 is ready to be installed. Engine 2054 is into pre-installation walk downs and liquid air insulation.’

Build-up work of Endeavour’s booster segments has been ongoing for some time now, and remains on schedule for stacking operations to begin on July 14 – as per KSC Milestone Chart timelines for Endeavour.

Meanwhile, four External Tanks are in the depth of production at the Michoud Assembly Facility (MAF) in New Orleans, with a specific report on their delivery status to follow this week. This will include an update on a mitigation plan to keep STS-125 on track for October, which has proven to be a resounding success.

Ironically, it was the problems relating to ET-127 (STS-125) and ET-129 (LON/STS-400/STS-126) that originally delayed the launch date to Atlantis’ trip to service Hubble. However, that delay would have occurred anyway, given the damage sustained by Pad 39A during Discovery’s launch on STS-124.

A huge engineering effort is still ongoing with both pads – firstly to decide on a forward plan to repair Pad A, while engineers also check for voids in Pad B’s flame trench.

A full overview of the investigation into the damage – and a decision on a repair plan – is set to move forward to an upcoming PRCB (Program Requirements Control Board) meeting. 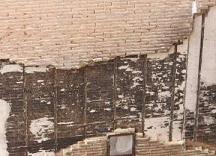 ‘Flame trench evaluation and mitigation work continues at both pads: Pull tests to evaluate the epoxy bond between the brick and the concrete wall pick up Tuesday. Tap testing is complete at Pad A but continues at Pad B,’ noted NTD status.

The next key event in the investigation will occur on Wednesday, when an Engineering Review Board (ERB) will meet to collate recommendations for the key PRCB meeting.

‘On pad brick activity, asbestos cleanup is still in work. Pad A has been completely mapped with tap test to determine any additional weak points. Pad B mapping is still in work,’ noted their latest status.

‘Still working NDE (Non-Destructive Evaluation) options to compare with tap test to determine if can come up with something that is reliable. Chemical analysis of brick is in work. Core drilling was completed this weekend.

‘This puts them in configuration to begin pull tests on areas they think are weak. Design options and analysis is in work. Worst-case reference drawing has been completed on one of the options. Plan is to have the option of choice down-selected by Friday.’

Confidence remains high that Pad A can be repaired in time for Atlantis’ rollout ahead of STS-125, though there is an element of concern about the status of Pad B’s flame trench walls. Further updates will be provided when information is available.

NASA plans to leave OBSS on Station after STS-133