A series of presentations, showing the superb work carried out by the Damage Assessment Team (DAT) engineers, have shed light on the refined process that allows for the confirmation that an orbiter is clear for re-entry.As is the case with Discovery on STS-124, baring a highly unlikely problem being found during Late Inspections, the LON (Launch On Need) requirement has been stood down. Interestingly, had it been required, an emergency shipping plan for ET-127 would have been put into action.

As Discovery prepares to undock on Wednesday, the crew have completed the final major tasks of the STS-124 docked stage of their mission.

Flight Day 10 consisted of further evaluations of the Japanese RMS (Remote Manipulator System), which included Brake Checkouts – as the robotic arm was stretched out on the end of the Kibo module.

JPM/Logistics Module Vestibule outfitting, the final stages of completing work on Kibo’s attic, also took place during Monday, in tandem with a late addition to the mission requirements – namely the changeout of two Battery Charger Modules (BCMs) in the Quest Airlock.

The task was completed by commander Mark Kelly and Mike Fossum during the second half of Flight Day 10, a requirement that saw two modified BCMs being installed into Quest.

‘Late addition of Battery Charger Module (BCM) R&R task: In order to expedite the removal of hardware with Tox 4 components from ISS, the BCM R&R had been planned for the 1J Stage, with the old BCMs slated for return on ULF-2,’ noted associated Flight Readiness Review (FRR) documentation.

‘Perform the BCM R&R task during the 1J docked timeframe following the completion of all scheduled EVAs and return the old BCMs on 1J. The two returning BCMs contain Tox 4 D-cell memory keeper batteries which are preintegrated into the circuit boards.

‘The BCMs will be double-bagged for return in the middeck as required by the Flight Equipment Safety and Reliability Review Panel (FESRRP). FESRRP coordinated with and received concurrence from Shuttle Safety.

‘The returning BCMs will be refurbished and reflown on a future flight to replace the two remaining BCMs on-orbit with Tox 4 components.’

Interestingly, Kelly and Fossum carried out some additional work on the two new BCMs on Flight Day 7, which involved disassembling the two units and snipping a resistor to keep the units from possibly overheating.

The BCM charging will be terminated and the health of the system statused on Flight Day 11. If the R&R is not successful, which is unlikely, the old units will be retrieved from Discovery’s middeck and left behind for re-R&R during the 1J stage.

A large amount of off duty time is available to the crew, ahead of their egress from the ISS to Discovery for the closure of the hatches between the two vehicles. Undocking will take place on Wednesday. 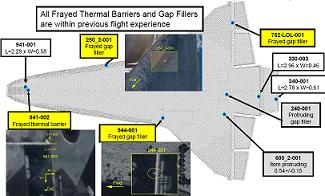 One of the most impressive elements of mission support is the comprehensive review of the orbiter’s Thermal Protection System (TPS), which is conducted by the Damage Assessment Team (DAT) in Houston.

This led to a prompt release of a requirement for a focused inspection.

With a great deal of attention being focused on the inspection of Discovery’s heat shield at the beginning of STS-124 last week, the DAT in Houston completed their review of all TPS images obtained by the shuttle and station crews.

Discovery was unable to carry the Orbiter Boom Sensor System (OBSS) to orbit due to the size of the Japanese Kibo lab.

As a result, Discovery’s flight crew were only able to conduct a limited survey of their ship’s RCC panels and OMS pods on FD-2, using the End Effector camera on the Shuttle Remote Manipulator System (SRMS).

Once the Discovery arrived at the ISS, station crewmembers took RPM photographs, which were then downlinked to Mission Control. 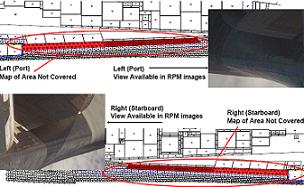 The combination of RPM and SRMS images have provided ground engineers with an overall picture of Discovery’s TPS – though there remain portions of the TPS that were only partially covered by all the imagery operations.

‘The upper surface sidewalls, upper chine, and upper LESS carrier panel tiles were only partial covered with a combination of SRMS, RPM, and extra imagery from ISS,’ noted one of several superb Mission Evaluation Room (MER) presentation, available to download on L2.

‘All these locations can be verified that the tile is installed. Resolution is not high enough to detect tile damage.’

All of these areas will be viewed in full resolution during Late Inspections with the OBSS after undocking from ISS. Nevertheless, the FD-5 MER report revealed a relatively clean TPS for Discovery, with only nine areas on the underbelly of the vehicle requiring review by the DAT. 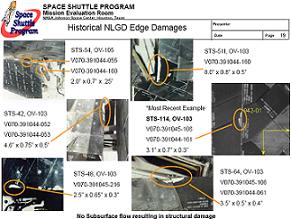 Nevertheless, thanks to the wide array of inspection tools and experience gained since Discovery’s Return to Flight mission three years ago, the DAT was quickly able to determine that ‘all Frayed Thermal Barriers and Gap Fillers are within previous flight experience,’ according to the MER presentation.

For the TPS tile damage near the thermal barrier of the NLGD, DAT analysis has shown that the damage is mainly superficial and does not extend to the primary thermal barrier.

‘Damage site is contained at the Outer Mold Line (OML) Thermal Barrier and does not extend to the Primary Barrier. Thermal seal integrity is maintained,’ added the MER presentation.

As is commonplace with TPS evaluations, the DAT analyzed the damage to the NLGD at three times its actually depth. ‘Damage analyzed at 0.65 inches in depth (with on-orbit photographic) observation (of) 0.18 inches,’ the report noted.

Even with these conservative analyses, there were no reductions to structural integrity or thermal seal integrity noted.

This, aided by flight history which includes at least six instances of NLGD tile damage adjacent to the thermal barrier – the most recent example being Discoveryâ€™s STS-114 Return to Flight mission in July 2005 – led to the DAT clearing this area for re-entry.

The other area of interest on the underbelly of Discovery was an unknown protrusion outboard of the right ET door. While the material has not yet been identified, the DAT has concluded that the protrusion does not pose any threat to downstream structures or TPS damage sites on Discovery during Boundary Layer Transition upon re-entry. 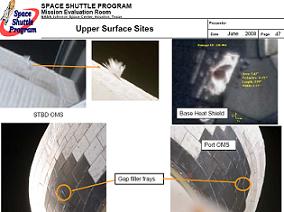 The other areas of TPS damage identified in the MER report include one damage area on the base heat shield, two protruding gap fillers on the OMS pods (one on each pod), and one frayed blanket patch on the right OMS pod.

All OMS pod damage sites are within flight experience are will not pose an issue during re-entry.

The final damage evaluation area on Discovery relates to the base heat shield around the vehicle’s main engines. Damage to one tile is estimated to be approximately two inches in depth. The most likely cause of this damage has been identified.

‘Tile insert was ground out during this processing flow due to damage from the OML to the IML with internal bore damage. An oversized FRSI plug was installed on an MR restricted basis,’ noted the presentation.

Aiding evaluations to clear this area for landing is a relatively low heat exposure for the base heat shield on re-entry compared to launch.

Overall, Discovery’s TPS is in great shape heading into the final phase of the mission.

The final OBSS late-scans will confirm the health of the vehicle’s TPS in the post-undock portion of the mission, with the DAT team gaining one extra Flight Day in the post-undock timeline to analyze the images obtained during the Late Inspections.

Thanks to the clean ascent Discovery and her modified External Tank (ET-128) achieved, the primary requirement for Endeavour to be ready to launch on a rescue mission (LON – Launch On Need) has been stood down.

While the chances of requirement a LON mission are slim at best, shuttle managers have to ensure a mission has the backup of another shuttle that can launch within a set timescale – called Contingency Shuttle Crew Support (CSCS) – to rescue the crew from the ‘safe haven’ of the ISS.

At the time of the Flight Readiness Review (FRR), the ISS could cope with the STS-124 crew living on Station with Expedition 17 for 90 days, before consumables started to run out.

In the event of critical damage to Discovery, Endeavour would have been tasked with a launch date of August 29. ‘STS-124 Rescued in 90 days (CSCS consumables = 94 days/O2 limiting factor),’ noted associated FRR documentation.

To achieve this launch date, the Michoud Assembly Facility (MAF) in New Orleans would have been tasked with an emergency shipping of ET-127 – currently set to ride with Atlantis on STS-125.

However, due to the problems and recent delays associated to its scheduled shipping date, this would have involved 24 hour processing on the tank, before being sent with a team of engineers to continue final processing at the Kennedy Space Center (KSC), during mating operations.

A secondary factor of ‘late call-up’ – which is even more unlikely and based on an unexpected damage occurring post-undocking, such as via freak MMOD damage found during Late Inspections – is also factored in by the FRR.

The rescue mission would have been flown via a subset crew of four from STS-126, with the ability to bring down a total of 11 crewmembers. Other factors were also pre-planned in the event of LON being called – which includes a special software patch for Endeavour’s General Purpose Computers (GPCs).

‘In the event of call-up by the SSP (Space Shuttle Program), STS-326 would be flown on OV-105 using the STS-123 Base Load as well as the flight specific I-Load patch released for the STS-323 Rescue LON.

‘Based on expected content, can support a rescue LON launch NET (No Earlier Than) 30 days after STS-326 call-up.’

Endeavour had three roles coming out of processing, with the LON requirements for STS-124, STS-125 (LON/STS-400), and her primary mission, STS-126.