As both Atlantis and Endeavour continue to enjoy smooth flows inside their respective Orbiter Processing Facilities (OPFs), the dual processing effort in support of STS-125 and the associated Launch On Need (LON) STS-400 moves to the Vehicle Assembly Building (VAB) on Monday.

This will be marked with the rollout of STS-125’s Mobile Launch Platform (MLP) – with stacked boosters – to High Bay 3, allowing Endeavour’s boosters to be stacked in the vacated High Bay 1.

Atlantis remains on track to rollover from her OPF on August 22, which will place rollout to Pad 39A on August 29. No major issues are being worked with the vehicle at this time.

‘Still tracking to rollover date on August 22. No major issues at this time. Completed the inspection on rudder speed brake (RSB) spring tabs; working with Engineering to develop a forward plan for vehicles.’ 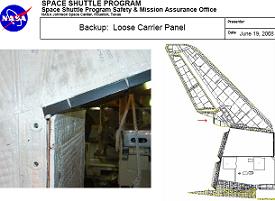 The reference to the RSB spring tabs is a new effort that has seen all three vehicles go through inspections. This follows the liberation of one of the tabs during the latter part of Discovery’s STS-124 mission. A forward plan is likely to see the removal of such tabs, given their minor role during ascent.

‘On the rudder speedbrake spring tab clips, it was a good catch that we had during flight. We have a long term problem here. We may end up with a short term solution and/or a long term solution,’ noted JSC’s Orbiter Project.

‘Looks like we have a two week lead time to build a couple of those, which will get close to the need dates. Are green on overall supportability and schedule assessment. Have no other support issues on OV-104 (Atlantis).

‘Have done our inspections on OV-104 and OV-105 (Endeavour). On OV-104, there are 12 different clips that have these tabs broken off at the weld, and one missing. On OV-105, there are six broken at the weld. Preliminarily on OV-103 (Discovery), there are three missing.

USA logistics responded by noting: ‘The short term solution may be replacing the clips for a few flights; or to fly as is. It may be a longer term solution to remove all the clips. Have more work to do on this.’

‘On OV-104 (STS-125), are working on rudder speedbrake spring tabs. There are 15-20 configurations. A couple are at zero balance. Working with Ground Ops to prioritize the items.’

It’ll take around three weeks to confirm if simply removing the tabs/clips is the best overall solution, with flight rationale being evaluated.

‘Have the analysis team looking to see if it is possible to accept them as is,’ added the Orbiter Project. ‘Could remove them, because donâ€™t want them flying off vehicle. But if we remove the broken ones, would that be acceptable for flight? That analysis should probably take about three weeks.’

Atlantis’ boosters for STS-125 – stacked on its MLP – are ready to rollout of the VAB, before being rolled back into High Bay 3. This will allow the MLP on Pad 39A to be rolled back to the VAB for the stacking of the SRBs for STS-400 (STS-126 Primary).

‘In VAB, completed removal of C-north platform and put it in transfer aisle. That put us in posture to roll out STS-125 stack on Monday, from HB-1 to HB-3. Will be mating the ET later.’

The boosters are also sporting a new modification to the hold-down bolts that keep the stack stable on the pad ahead of launch. These bolts are broken at T-0 via an explosive fuse located on a frangible nut, allowing the stack to rise off the pad at booster ignition

However, evaluations have shown a number of ‘hold ups’ on the bolts during launch, which has led to a debuting of the new modification with STS-125.

A full article based on presentations acquired by L2 will be published during the STS-125 VAB flow.

Atlantis’ External Tank (ET-127) is in the final few days of processing, with Michoud Assembly Facility (MAF) workers continuing to finish work on the tank throughout the weekend.

With the aim of advancing the STS-125 launch date forward by a few days, the shipping date for this tank – and ET-129 for STS-400 – will be monitored closely.

‘The electrical test and checkout activity is the critical path. The camera functional is complete. Have pressure transducer checkouts in progress. Shakedowns continue. Completed the NDE (Non Destructive Evaluation) effort on that tank.’

‘Processing at MAF continues to proceed well. The Pegasus Barge moved out of the VAB Turn Basin last week; transport to MAF is underway. Planned departure from MAF is 7/10 with the possibility of leaving as early as 7/8 (now confirmed).

‘Will arrive at MAF on July 2 to support tie down hardware proof test before ET-127 transport. This will be their first trip up the Gulfport Intercoastal.’

Marking another processing milestone on Monday will be the installation of Endeavour’s SSMEs, which is surrounded by ongoing work on her Thermal Protection System (TPS).

Processing remains green, ahead of her scheduled rollover to the VAB on September 16 – by which time Atlantis will have arrived at Pad 39A – ahead of rollout to Pad 39B on September 23.

‘Still tracking to scheduled rollover on September 16. Working preps for engine installation, scheduled for Monday,’ noted processing information. ‘This week, have been working payload pre-mate testing. Next week, will be moving MLP off of Pad A back to VAB HB-1, to support STS-126 SRB stacking.

Stacking of Endeavour’s boosters in the VAB is scheduled to begin on July 11.

STS-123’s Auxiliary Power Unit (APU 1) pressure decay on Endeavour was also discussed by the Orbiter Project Office last week. This included a short term fix – which has proved to be successful on the removed unit – and a long term solution aimed at the APUs on all the vehicles.

‘At OPO tech tagup, talked about OV-105 and the APU 1 fuel tank leak seen in-flight. Took the cap off the poppet, and it leaked. Team replaced the material in the poppet,’ noted the latest Shuttle Stand-up/Integration report. ‘ Went in the lab and did a test under cryo conditions with an engineering test unit, and put a new seal in it.

‘That particular unit was chilled down to the same temperatures we found on the vehicle, and that unit did not leak. This is a short term/long term plan.

‘The short term plan may be to change out the poppets and seals on the vehicles. Still have some analysis to do on the one removed from OV-105. We may be seeing some contamination along with marginal cap seal that caused N2 leaks on some flights.

‘The longer term option may be taking the heaters on the fuel lines in that panel area and routing them over to the N2 line and preventing the Q/D (Quick Disconnects) from getting to those cold temperatures during flight.’

Endeavour’s tank (ET-129) is continuing to be processed without issue – aiding the potential advancement of STS-125’s launch date – as the shipping date attempts to advance on the current schedule, which shows departure from MAF due on August 2.

‘ET-129: Proceeding without issue. TPS closeouts are in progress on the LO2 feedline; flange closeouts and the longeron are proceeding well,’ added the MAF report. ‘The critical path is through the electrical and wire harness routing.’

Following her hugely successful STS-124 flight, Discovery has marked her post-flight processing milestones with the removal of her three SSMEs last week. The vehicle is now heading into STS-119 processing, which will include the replacement of three of her windows.

‘Started engine removal (last week). Got all three engines out. Theyâ€™re back in the shop. Starting post-flight inspections on that set.’

One issue that’s been noted ahead of her February flight to the International Space Station (ISS) is the lack of a replacement RCC (Reinforced Carbon Carbon) panel for her right wing. A new one isn’t due to arrive until just a few weeks prior to launch, thus a replacement with a previously flown spare may become the preferred option.

‘On OV-103, the major shortage is the RCC 10R panel. That is still tracking with Lockheed Martin for January 30,’ added USA Logistics. ‘This is a red supportability risk to schedule. For this mission, may need to rotate one of the 10R panels back to OV-103 to support the current launch date.’

Last Thursday also saw the IFA (In Flight Anomaly) review of STS-124, which was presented via 12 presentations (all available to download on L2) outlining every element of the mission, from the now-infamous launch pad events, to the performances of the ET, SRBs, EVAs and flight software – among other elements.

A full round-up article on the post-mission IFA review will be published this coming week.