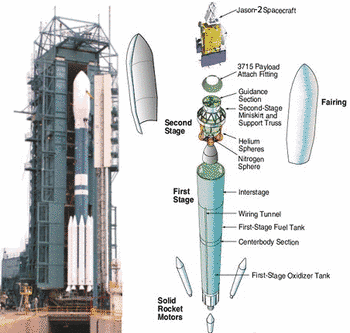 A United Launch Alliance Delta II (7320-10) launch vehicle has launched with Jason-2 – a European/American Ocean Surface Topography satellite – from SLC-2 at Vandenberg Air Force Base (VAFB), California. Liftoff was confirmed at the opening of the window at 00:46 PDT.

NASASpaceflight.com covered the launch as a live event, with background, images, live updates and a free launch video – all available on the links below (read more).

The satellite – which will be managed by NASA’s Jet Propulsion Laboratory (JPL) in Pasadena – will be placed in an 830-mile-high orbit at an inclination of 66 degrees after separating from the Delta II 55 minutes after liftoff.

Jason-2 will enter orbit below the satellite it is set to eventually replace, Jason-1, after a period of around three weeks. It will maneuver to its operational orbit in order to be ahead of, or behind, Jason-1 by one to ten minutes. It has a lifespan of around five years.

The formation flight of the two satellites will last approximately nine months, which will enable a rigorous comparison and correlation of Jason-2 and Jason-1’s altimetry results.

The Jason-2 project is a response to the international demand for programmes to study and observe oceans and the climate, through a worldwide ocean observation system.

To carry out this mission, Jason-2 will carry a host of CNES and NASA scientific instrumentation – including the next generation Poseidon altimeter, as listed below:

A Time Transfer by Laser Link (T2L2) payload was initially planned to be embarked on MIR in 1999, then with the ACES mission on the International Space Station (ISS).

Under the OSTM (Ocean Surface Topography Mission) program NOAA will provide support from its satellite ground segment capabilities for management of the Jason-2 Satellite flight operations during its routine operational phases and to acquire, produce, and distribute geophysical data in a manner beneficial to all interested users.

While Jason-2 is designed to take over from Jason-1, Eumetsat, NOAA and CNES have already confirmed their commitment for Jason-3 for 2013-2014.

Re-live the launch updates on the live event pages, linked above.