Processing remains green for both Atlantis and Endeavour inside their respective Orbiter Processing Facilities (OPFs), though two issues – one with each orbiter – have arisen.

Atlantis has been having problems with a Reinforced Carbon Carbon (RCC) panel on her right wing, with donations from both her sisters having caused issues, while Endeavour may require a replacement of External Tank door motor – with no spare currently available.

Both orbiters need to be in ship shape condition before moving to the next phase of their parallel processing flows for STS-125 (Atlantis) – and Launch On Need rescue support STS-400 (Endeavour).

Thanks to the previous slip of the launch date targets, caused by production delays with the two required External Tanks at the Michoud Assembly Facility (MAF), a large amount of flexibility was handed to the orbiters in their processing flows.

The week got off to the good start, with an issue free rollout of the STS-125 stack – currently consisting of two stacked Solid Rocket Boosters (SRBs) – to High Bay 3 on Monday, making space in High Bay 1 for the arrival of the Mobile Launch Platform (MLP) from Pad 39A, for the start of STS-400/STS-126 booster stacking.

‘New IPR (Interim Problem Report) was taken to documented a known condition that SP1 will intermittently not change modes. No further troubleshooting will be performed at this time. Hydraulics will be configured to full today in preparation for final flight control surface cycling scheduled for Thursday.’

The main focus of attention is the installation of the RCC panel (10R) on the right wing of Atlantis, which had issues during a fit check. Atlantis was originally set to receive a panel from Endeavour – but it suffered from fit check issues.

The donation is now being taken from Discovery, with a new panel being ordered – and due to arrive from Lockheed Martin in January – in time for STS-119.

‘Continuing to work installation of the RCCs. Got 14L installed for flight,’ noted Ground Operations (USA/KSC). ‘Continuing to work 10R; got the one from OV-105 that was fit checked. Experiencing some problems there, so are looking at some options.

‘The OV-105 panel that was intended to be put on there is not fitting after the jack transfers. The team is going to look at putting on the OV-103 panel.

‘That panel had a 0.11 Winfrey measure on the vehicle post-flight. When they took that panel off, took it to the bench and removed the T-seal, the 13mm Winfrey value was 0.20, and the 25mm value was 0.25.

‘The team is assessing those values to make sure weâ€™ve got a good panel. When looked back at the post-flight data from STS-124, the 9R T-seal did shift during flight.  Had a 0.54 inch step, which caused some erosion on the 9R T-seal.

‘It looks like when putting that T-seal on, we may have had some issues trying to get the step and gap worked out. Will go slow with 10R, making sure we have a good panel on OV-104.’

As of Wednesday, the news appears to be positive, with fit checks proving to be successful. Final evaluations are taking place.

The other element of interest with STS-125’s flow is the need for a replacement UHF radio for Atlantis. The back-up plan – should a replacement fail to arrive in time – is to once again head over to Discovery and use her radio as a donation.

‘Need UHF radio for OV-104/STS-125. Currently backfilling by the need date for that radio of August,’ noted the Orbiter Project. ‘Working hard to see if they can meet that date; otherwise will have to cannibalize the radio from OV-103 (Discovery). Trying to avoid that.

‘Sending techs to Houston to work 24/7 on that radio to meet the date. Also in the process of upgrading a qualification unit at; it passed preliminary checkout.’

Meanwhile, the STS-125 flow awaits news on when the External Tank (ET-127) will be ready for shipping from MAF. Schedules appear to be centering around a shipping date of July 8, which won’t be affected by a problem suffered by the Liberty Star – which was en-route with the Pegasus barge to pick up the tank for its trip to Florida.

‘Liberty’s starboard main engine lost oil pressure near Miami in route to MAF,’ noted the United Space Alliance. ‘After looking at repair and transfer options, decided to return Liberty to Port Canaveral and send Freedom with Pegasus to MAF.

‘Have new ECD (arrival on dock) of July 4. They are on their way. Will look at Liberty, and should be able to repair.’

‘The critical path continues through the electrical and systems test checkout scope. Working nose cone checkouts at the internal intertank. Going well. All systems test is planned for this week. Should put us in good status to get ready to move next week.’

Endeavour’s flow this week is being highlighted by the installation of her three SSMEs, ahead of her opening role as the LON rescue shuttle that’ll be sat on Pad 39B when Atlantis launches. Her primary mission is November’s STS-126.

‘Engine instillation will picked up Monday. Engine 2047 was loaded on the hister Friday night,’ noted processing information. ‘Drove it over to Bay 2 Monday morning. Engine 3 followed, and then engine 2. This Wednesday, will be cycling the RH PLBD (Right Hand Payload Bay Door) to evaluate the RH aft radiator retract hose.

‘The zero-Gâ€™s were installed last night to support stowing the KU-band antenna and cycling of the RH PLBD for the radiator retract hose inspection scheduled for today (Wednesday). Fuel cell ullage verification is complete and good.’ 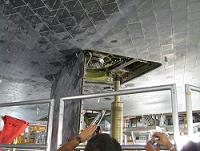 The main issue being worked with Endeavour is a problem with a drive motor on her left hand ET door – which is used to close the door after the separation of the External Tank following MECO (Main Engine Cut Off).

‘Last week, did ET door push test. Had an issue with motor #1 on LH side,’ noted the latest Shuttle Stand-up/Integration report. ‘Looking at that data for potential R&R.’

The ET door drive system – or PDUs (Power Drive Units) – are a dual motor drive system, integrated into a common unit, with a slip clutch connected to the output to prevent damaging the motors or drive train if the door locks up.

Over time, engineers have noticed the output torque on the motors has been reducing – which was investigated – and believed to be caused by grease on the clutch plates, and/or the clutch system balls were a smaller diameter than specified in the design.

A test procedure was created to keep an eye on the degrading of the torque measurements, to ensure they remained within spec. This test spotted the issue with Endeavour during this flow.

The results show a very significant drop in the torque measurements – and below the acceptance level. It was also observed as erratic.

The problem is still being looked at, but is deemed to be likely due to a malfunctioning brake, which locks motor 2 when motor 1 is running by itself. It is very likely the motor will be changed out, which is a lengthy process.

There are no spare units on site, with only one spare at the vendor, Telair. That unit has been broken down and rebuilt over the last couple of years – and was part of the original investigation into torque degradation.

This unit is likely to require an ATP (Acceptance Test Procedure), before it can be installed into Endeavour – providing this effort remains within STS-400’s flow timeline.

Should time fail to be on the side of the engineers, the final option would be to turn to Discovery once again for a donated motor from her left hand ET door. The spare unit at Telair would then be targeted for replacement of Discovery’s donated motor. 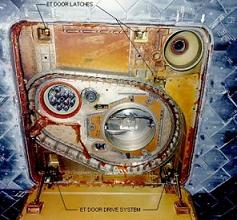 The basis for so much attention being placed on the small motors relates mainly to an abort scenario. The motors have the ability to close the heavy beryllium on orbit without much of a strain, due to zero g. This procedure is carried out around 15 minutes after launch.

Normally, the drive system moves the door to about 10 degrees shy of closing, before the latch PDU drive system extends three latches to go down, grab the door at three clevises, and then pull the door tightly closed.

The system is capable of carrying this out in 1g conditions in the OPFs, but needs to be working within spec – especially if this process is required during a Return To Landing Site (RTLS) abort – which would require the doors being closed under stressful conditions.

An oversight would never happen, thanks to the rigorous process the engineers undertake with the orbiter processing flows. On each flow the engineers perform the door stall test to verify the drive system PDU output torque is acceptable – and then perform a complete door cycle and latch.

There is also an interval test run around every five flights that lifts 1150 pounds off the floor using the latch system.