Shuttle Discovery’s right Solid Rocket Booster (SRB) “tailed off” sooner than the left during the final part of first stage ascent – the IFA (In Flight Anomaly) review of the STS-124 mission has noted – causing Discovery to counter via “greater than typical steering commands”.

The review, discussed at the all-powerful Program Requirements Control Board (PRCB) meeting, evaluated every single anomaly relating to what was a highly successful mission.

Discovery is currently processing towards the STS-119 mission next February, which will take onboard any post flight requirements gained via the IFA findings. The review is also used to aid clearance for the upcoming shuttle missions – STS-125 with Atlantis in October, and STS-126 with Endeavour in November.

Very little is being said about the booster incident, bar that it was caused by a drop in pressure on the right booster – as expected during the burnout of the booster prior to separation. However, the tailoff occurred prior to the same event on the opposite booster.

With the reduction in thrust on one side of the stack, Discovery was forced to react with ‘greater than typical steering commands’ – which would have resulted in the SSMEs (Space Shuttle Main Engines) and/or the SRB TVC (Thrust Vector Control) system countering to keep the shuttle on the correct trajectory.

ATK – who build the boosters – are also aware, though their IFA presentation only notes they are ready to support the subsequent investigation and closure.

There are no historical notes attached on the IFA review documentation of a similar event, though sources note that the vehicle is capable of coping with such events via the flight software, which automatically detects and corrects.

The reaction of Discovery during the STS-124 event prior to SRB separation is deemed to be within specifications. A clip from the ET cam is believed – though not confirmed – to show the roll noted *click here for video*.

The boosters have since been through their post flight evaluations, after being towed back to port from Atlantic ocean. No issues have been found that relate to the performance of the boosters – which is documented as ‘excellent’.

The separate SRB IFA presentation again notes a problem with the SWAR (Sea Water Activated Release) ‘failures to release’ – which is a known condition that has occurred on a number of flights in succession now.

The SWAR provides a method of disconnecting main parachute from SRB after splashdown, with the immersion in seawater closing an electrical circuit to release a shear pin from the riser about two seconds after immersion.

The SWAR was fully implemented in 1998 on STS-95, in order to increase diver safety by eliminating need to cut parachute lines. Since STS-122, the problem has been heavily documented on both post flight and pre-flight Flight Readiness Review (FRR) presentations.

The problem is believed to be associated with a known failure mechanism with the pyrotechnic train, when the primer fails to breach three millimetres stainless steel booster closure cup with enough energy to ignite charge in booster.

Other issues noted include an aft single BSM (Booster Separation Motor) observed to be missing its graphite throat, a missing bracket on the Triple BSM forward mounting, and various missing insulation from the boosters – though only via minor liberations. 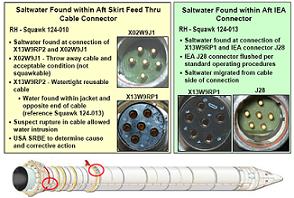 For the first time – on recent flights at least – the electrical feed-through connectors on both boosters came into focus, with a foreign object and saltwater found on the pins that carry readings and instructions from the orbiter to the booster systems and visa versa.

Infamous from the problems relating to the External Tanks since Return To Flight – and only focused on as the suspect hardware during STS-122’s troubleshooting – the feed-through connectors on the boosters are similar in appearance.

Given the boosters impact the ocean following their separation and fall back to Earth, there is a good chance that the rupture to the cable occurred at that time, as opposed to during its flight. This will be investigated.

Only 16 items were recorded by the Mission Evaluation Room (MER) during Discovery’s flight, with only a handful of those holding any relevance to her next flight. An Orbiter IFA based review expanded on all of those issues noted, along with their relation – if any – to Atlantis and Endeavour.

The items listed included the Left OMS Secondary TVC (or gimbal) controller’s ‘failure to null in both pitch and yaw’ – which is still undergoing evaluation in the Orbiter Processing Facility (OPF) in order to find a root cause. 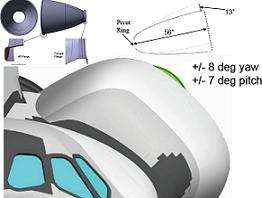 This issue, which had no impact to the mission, still proved to be useful for lesson’s learned, as engineers on the ground worked through scenarios relating to a worse situation with the position of the OMS engine bell during re-entry – providing a ready-made plan in the unlikely event it is required in the future.

‘The primary position feedback indications remained in the nominal stow positions during the same timeframe. The left OMS was utilized for OMS assist, OMS 2, and OMS 3 (NC-1) burns as planned. OMS 2 was burned using primary TVC, and a post burn gimbal check was not performed on the left secondary TVC.

‘The Left OMS TVC was parked through the EOM C.G. (End Of Mission Center of Gravity – post NC 1) and powered off. The Left OMS remained in this config until the deorbit burn.

‘All remaining on-orbit single engine OMS burns were completed using the right OMS engine. During wheel touch down both indications recovered indicating an intermittent open circuit in, or to, the power supply to the OMS controller.

‘Post-Flight Plan: STS-119: TVC was actuated using the secondary controller in the OPF; no issues identified. Will continue troubleshoot to isolate the open circuit or controller. STS-125/STS-126: None.’

A sign of the level of detail the orbiters are put through during their processing is in evidence with the findings that a blown one amp fuse was the cause of an issue with Fuel Cell 3’s hydrogen flowmeter.

‘These four measurements are powered by the mid-PCA 3 through a common fuse (F6). A 0.4 amp drop in the overall current on MPCA-3 was observed, which is consistent with the expected current for the instrumentation lost.

‘Loss of this measurement resulted in loss of insight into monitoring a potential problem developing in a cell. As a workaround, the Fuel Cell Monitoring System (FCMS) was powered up daily to record and download individual cell data.

‘As a result of this failure Main Bus B and Main Bus C remained bus tied after SSPTS (Station-Shuttle Power Transfer System) deactivation except for critical burns.

‘Post flight plan: STS-119: The 1 amp fuse F6 in Mid PCA3 has been removed and found to be blown. Continuity and isolation checks will be conducted on the path that powers the H2 flowmeter and the CPM to further troubleshoot this problem. STS-125/STS-126: None.’

Only one issue will require evaluation on all the orbiters in the fleet, namely a problem with the external airlock upper hatch latching difficulty, which was reported by the STS-124 crew. 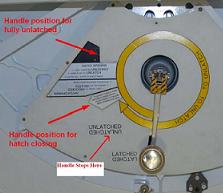 ‘The crew reported difficulty closing and latching the External Airlock Upper Hatch on Flight Day 11,’ added the IFA presentation. ‘Attempts to position the actuator handle over the decal that indicates the correct ‘pre-closing’ position were unsuccessful, as a hard stop was encountered prior to reaching that position.

‘After approximately 10 minutes of attempting various techniques, the crew was able to seat the hatch by moving the handle slightly in the latching direction. Latching was then completed successfully.

‘Post Flight Actions: Troubleshooting has determined that a stop bolt in the latch mechanism is adjusted such that the actuator handle can travel approximately 405 degrees from the fully-latched position (should be approximately 440 degrees).

‘Ground cycles have duplicated the crew’s inability to reach the ‘pre-closing’ position. It is not yet known whether this is due to improper rigging or a problem with the rigging specification itself.

Numerous other items in the presentation related to items such as the APU (Auxiliary Power Unit) 3 injector water cooling line thermostat, which was noted as ‘dithering’ for around half of the mission – this is being replaced ahead of STS-119.

Also gaining a mention was the Rudder Speed Brake (RSB) Thermal Clip liberation event near the end of the mission, with a plan already in place for the replacement of the clips on Atlantis for her STS-125 mission.

As previously reported by this site, the long-term plan to evaluate the potential of removing all the clips/tabs from the orbiters in time for STS-126 – should it be deemed as viable.

A second IFA review article will follow in the coming days, focusing on the performance of the External Tank (ET-128) and all debris events (from the flame trench to during ascent).

All 13 STS-124 IFA presentations are already available to download on L2.