The External Tank that will fly with Atlantis during her STS-125 launch – ET-127 – has finally been completed at the Michoud Assembly Facility (MAF) and began its journey to Florida late on Thursday.

However, the ET production battle in New Orleans is by no means over, with ET-129 – required for the STS-400 Launch On Need (LON) requirements – remaining on a tight schedule, and the following two tanks – ET-130 and ET-131 – both over a month behind schedule.

Despite manufacturing delays to ET-127 (and ET-129) ultimately causing the delay to STS-125 from August to October, a massive effort in New Orleans has helped avoid the Hubble mission slipping – in the worst case scenario – to the end of the year.

Lockheed Martin managers at MAF – and their supporting NASA center MSFC (Marshall Space Flight Center) – ably found ‘get-wells’ in the production schedules of the two tanks, via a TIM (Technical Interchange Meeting), which resulted in an opening plan to improve the construction schedule.

‘ET project has been closely coordinating with the SSP (Space Shuttle Program) Manifest and Scheduling office,’ noted a presentation that pre-empted a meeting to discuss a previously desired – but no longer possible – acceleration to STS-125’s launch date by a few days – designed to relieve strain on STS-126’s launch date the following month.

‘ET-127 and ET-129 are currently under-supporting the current need-to-ship dates by 5 days and 13 days respectively.’

However, a ‘seven days a week, three shift’ production plan, along with concentrated efforts on key safety modifications to the tanks, brought ET-127 inside the required shipping date – at one point by several days, before slipping back to around deadline once again.

Thursday’s shipping will see ET-127 arrive with a handful of contingency days in the Kennedy Space Center (KSC) flow for an October 8 launch date – based on the latest deadline of a July 15 shipping commitment.

However, a pre-empted plan – designed in the event of a late arriving tank – may find a few additional days in the flow up to mating with STS-125’s Solid Rocket Boosters (SRBs).

Even then, the battle to be in a position to aim for an opening launch attempt of STS-125 by October 8 isn’t won, with the unique STS-400 requirement ensuring ET-129 also has to arrive in early August to be within the timeline that will allow Endeavour to roll out to Pad 39B as the rescue shuttle.

With this tank being almost two weeks down on its required shipping deadline just last month, the completion of ET-127 has allowed the workforce concentration to switch tanks.

The benefits of this has already been seen via processing reports which show the shipping date down to August 5 at one point, which is just within schedule.

The MAF effort should not be underestimated, with this being the first time in many years that two new tanks have been required to depart MAF within a month of each other – added to the fact these tanks are heavily modified with new safety features that have added weeks to the production flow of a new ET.

MAF are close to achieving this depsite a reduced workforce that is still recovering from Hurricane Katrina in their personal lives, and tight constraints on overtime payments.

ET-127 and ET-129 are the second and third ‘newly built’ External Tanks – meaning they have been constructed from scratch with the safety changes that have been brought in since the loss of Columbia – as opposed to complete/part complete tanks that have been modified.

Debuting the full array of changes was ET-128, which flew with Discovery on STS-124. This proved to be a hugely successful flight of a tank that was also debuting the final ‘major’ mitigation refinements to prevent foam liberation during ascent.

‘ET-128 Performance Consistent with Previous External Tanks (with only two impacts to the orbiter).’

The main foam event for STS-124’s ascent came via the LO2 Feedline Support Outboard Base Fitting Closeout, which lost foam at two points of Discovery’s ascent – one at T+144 seconds, and another at T+216 seconds.

These events were caused by aforementioned ‘cryo-pumping driven void delta-pressure and delamination’ – though engineers had already planned ahead for this, with a future refinement to the tanks that will see voids in this area of the tank removed from ET-131 onwards.

‘A redesign of the lower outboard and inboard LO2 Feedline Bracket closeouts is currently in work and scheduled to be implemented on ET-131,’ added the presentation.

‘Redesign will eliminate the internal voids observed during dissections of ET-94 and ET-120 and is expected to mitigate debris loss in the Inboard and Outboard LO2 Feedline Bracket Closeouts.’ 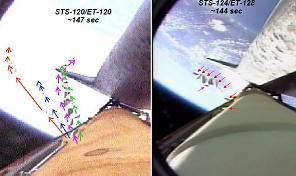 The LO2 Feedline Support Outboard Base Fitting Closeout liberation events also closely matched those observed on STS-120. However, both their mass and time of release never threatened to cause Discovery any damage of note via an impact to the orbiter.

Of the other areas of foam loss, including the ‘LH2 Acreage Aft of -Y Bipod Multiple piece release’ – which resulted in a minimal impact to Discovery’s belly – shearography tests will be carried out on ET-127 and ET-129 upon their arrival in the checkout cell inside the Vehicle Assembly Building (VAB).

This will enable confidence that voids are not present in those areas of the tank, following their five day barge trip from New Orleans.

All 13 STS-124 IFA presentations are already available to download on L2.

With the newly refined manifest for the remaining missions – exclusively published by this site, and made official a week or so later by NASA – aligning flights in the wake of STS-119’s move to February, 2009, the ET shipping dates for ET-130 and ET-131 remain under evaluation.

At present, they are behind schedule and may cause another slip of STS-119 – which may also involve another full manifest realignment.

The ET shipping date pressure relates to both the primary missions of STS-119 and STS-127, plus their respective abilities to be within schedule to support the preceding mission as the LON requirement.

‘MSFC-ET comment: ET-130 currently projects 37 days late to the need ship to support STS-119 launch on 2/12/09, this would also have an impact on the LON processing and support to STS-126 required for 2/8/09,’ noted a presentation associated with the official release of the refined manifest.

‘ET-131 currently projects 32 days late to the need ship to support STS-127 launch on 5/21/09. This would also have an impact on the LON processing and support to STS-119 required for 5/13/09. Activities are underway to improve the under support posture indicated for the effectivities below.’

An evaluation of the shipping dates will take place shortly after Atlantis launches on STS-125, with managers remaining hopeful that the delays to shipping the two tanks will shrink in the interim period.

Another factor that has to be taken into account is the test launch for the Constellation program, namely Ares 1-X – which currently has a fluid launch date of sometime between April 15 and June 1. This relates to High Bay use in the VAB.

‘STS-119 can slip approximately one month before impacting STS-127 Based on Ares I-X use of High Bay 3 (slips out at the pad don’t count). IF Ares I-X slips past August 2009, then shuttle manifest remains ‘single VAB High Bay’ driven and slips to STS-127 are day for day impact to STS-128.’

The bottom line came via the United Space Alliance’s ground ops team, which stated the dates the two tanks need to be on dock at the Kennedy Space Center (KSC). Any later, and the missions will slip, activating another manifest re-alignment that is likely to include impacts to Ares 1-X.