For the first time, Atlantis’ boosters have a new Frangible Nut Crossover System on the holddown bolts/posts, to help prevent aft skirt “stud hang-ups” when the vehicle lifts off the launch pad. 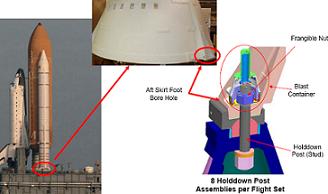 There are four holddown posts (studs) on each booster, with each stud 28 inches long and 3.5 inches in diameter.

The stud has a frangible nut at the top end, which contains two NASA Standard Detonators (NSD), which are fired at the time of SRB ignition, breaking the nut and releases the connection between the vehicle and the post.

A clean separation from the holddown posts avoids potential aft skirt damage to the boosters, with a historical issue relating to ‘stud hang-ups’ being addressed with the new modification.

A stud hang-up occurs when the stud does not clear the aft skirt foot bore hole prior to the vehicle first liftoff motion (appx 200-250 milliseconds after ignition).

Once vehicle liftoff has occurred, the stack begins to drift north, which causes a non-ejected stud to be bound/pinched with the aft skirt bore hole. The stud is released when the vehicle pulls away.

A total of 25 aft skirt stud hang-ups at launch have randomly occurred on 23 shuttle launches since program inception, according to historical documentation.

On STS-2 and STS-92, two stud hang-ups occurred on one Aft Skirt. On STS-112, the electrical signal was not transmitted to one booster cartridge at each frangible nut due to a corroded MLP (Mobile Launch Platform) connector, resulting in a stud hang-up.

The CAIB (Columbia Accident Investigation Board) report mentions this STS-112 anomaly and states: ‘NASA should consider a redesign of the system, such as adding a cross-strapping cable,â€¦’ Efforts to understand and minimize stud hang-ups have been performed numerous times in the course of the program.’

‘Reduction in system firing skew greatly reduces the effects of other contributors, such as nut half re-contact, plunger seating/frangible link breakage, debris interaction, bore hole contact, and frictional forces from the plunger.’

The issue of ‘nut reclamping’ can occur when the nut halves/debris rebounds after hitting the blast container inside the aft skirt – which simultaneously re-clamps the stud. NESC tests show that re-clamping can occur.

The material properties of the new crossover components – now made from stainless steel in the new system – ensures the debris is no longer a concern when compared to existing, expected debris – previously Inconel material. 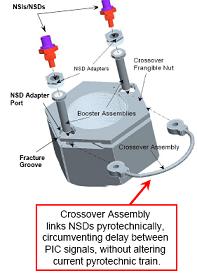 NESC also recommended a redesign to minimize pyro skew, following tests and computer model show that obtaining close to zero skew will significantly reduce the probability of stud hang-up. This has seen the implementation of a cross-strapping cable to ensure initiation of both booster cartridges.

‘Benefits of the Frangible Nut Crossover System: Critical aspects of the current configuration remain unchanged. Strength and fracturing of the frangible nut remain unchanged. Existing pyrotechnic interfaces are unchanged,’ noted the associated presentation on the modification – available on L2.

‘Probability of stud hang-ups in any 4 posts out of 8=1/4900. Results of NESC modeling show stud hang-up probability to be reduced from 20 percent (based on historical data) to 2 percent per flight. Design provides redundancy to ensure initiation of both booster cartridges.’

Now implemented into STS-125’s boosters (Booster Integration BI-135), Certificates of Qualification (COQs) have been signed, with the design to be implemented throughout the remainder of the program.

Processing of Atlantis for the mission to service the Hubble Space Telescope remains on track, with work on the Crew Equipment Interface Test (CEIT) and midbody activity taking place.

The replacement of a RSB (Rudder Speed Brake) tab – likely to be the last, given evaluations are taking place to remove the tabs from the orbiters from STS-126 onwards – is also taking place, along with the completion of installation work on a donated Reinforced Carbon Carbon (RCC) panel on her right wing.

Weekend work on the orbiter will see further evaluations on the CEIT, alongside the final leg of Thermal Protection System (TPS) work on the belly of the vehicle. ‘Optics shoot and target removal’, along with the de-pinning of the EVA slidewires is also taking place.

All work on Atlantis’ boosters is complete, with the wait for the arrival of ET-127 soon to be over, following the shipping of the tank on Thursday. The barge containing the External Tank is due on dock at the Kennedy Space Center (KSC) on Wednesday – weather permitting.

‘Boosters are standing ready for ET/SRB mate. The tank is on the barge. Expected delivery date at KSC is 7/16,’ added processing information. ‘Potentially looking at the long range forecast; there might be high winds there Tuesday and Wednesday that they will need to watch to ensure they can go up Banana River.’

As previously reported, it has taken a fine effort from the workforce at the Michoud Assembly Facility (MAF) in New Orleans to advance the shipping date of the tank – following large-scale slips in the original completion date due to production challenges.

Shuttle manager John Shannon ensured MAF were made aware of the program’s gratitude for what has been a seven-days a week effort – which is continuing on the next three tanks.

‘(Mr) Shannon is proud of the team for pulling it together, buying back a few days for the Program, and for creating a quality product,’ noted the latest Shuttle Stand-up/Integration report, which went on to list the latest status of the next three tanks – the latter two – ET-130 and ET-131 – currently being over a month behind schedule.

‘ET-129 (STS-400/STS-126): Wrapping up final assembly activities. Securing tank over there. Rolled ET to Building 420 (Friday). During second shift, work on tank. Working towards meeting August 5 ship date. Working to move date in once go into closeout and testing activities.

‘ET-130 (STS-119): Tank has been rolled into final assembly 3. Currently in setup and leveling. Aft interface is in buildup. Plan is to re-shift and re-man now that ET-127 is going out. Will go to three shifts seven days a week. Will do first shift-only work on ET-130 on critical path activities until ET-129 is moved out.

‘Progressing towards moving ET-130 date back in consistent with need date.

‘ET-131 (STS-127): Re-sprayed test windows on LOX intertank flange. Trims on the re-sprays are about 70 percent. Intertank and LO2 ice/frost ramps are in work and are the pacing items to get LOX/intertank combination moved over to Cell A.

‘Will be loading the LH2 tank into Cell A next week once get cell re-prepped. Will go into get ahead work on aft APEX closeout and etc.’