STS-125 mating operations inside the Vehicle Assembly Building (VAB) are continuing to target rollout to Pad 39A on Saturday – although an issue with Atlantis’ LH2 umbilical plate is being evaluated.

A small piece of aluminum liberated from the plate, when the connection to the tank was demated – following a problem with the removal of a Ground Support Equipment (GSE) pin.

Atlantis rolled over from OPF 1 to the VAB on Friday night after the weather cleared. S0004 Orbiter/ET Mate lift from the Orbiter Transporter began Saturday at 0905 with hard mate completed Sunday at 13:55.

The sling which had lifted Atlantis over to ET-127 has now been removed, as mating between the orbiter and the tank – a week long process ahead of rollout – picked up the pace.

This included the mating of both the LO2 and LH2 umbilicals between Atlantis and ET-127, a process which involves the orbiter being slowly drawn/jacked towards the ET in very small increments via three GSE bolts/pins.

The corresponding umbilical plates are bolted together; and when external tank separation is commanded, the bolts are severed by pyrotechnics.

During the mating process, one of the LH2 GSE bolts was found to be out of sync, causing the jamming of the operation – however, this was soon evaluated as not being a problem for the completion of mating operations.

The next operation involved replacing the GSE bolts with a flight stud and pyrotechnic bolts. However, removal of one of the GSE bolts/pins failed.

This led to a decision to back out of the process and demate the connection between the orbiter and the tank to allow for a closer evaluation.

‘Engineering analysis was performed and consensus was to back the umbilical out and re-inspect all components. Upon de-mate, it became evident that that the forward and inboard jack bolt locations did not have caps installed at the umbilical pyro can covers (the jack bolt reacts against these during de-mate).’ 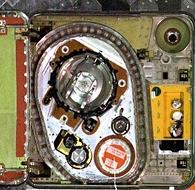 A second issue was then observed, relating to a small piece of aluminum that was found on the troublesome bolt. This material originated from Atlantis’ umbilical plate – and thus required evaluation, as the liberation points to damage on Atlantis’ hardware.

‘Further inspection revealed that metal material was transferred to the aft jack bolt guide pin during high-torque operations,’ added the processing information. ‘The material could not be removed, preventing removal of the guide pin through the ET side hole.

‘Damage to the umbilical hole on the Orbiter side traverses the entire length of the hole. Boeing and MPS (Main Propulsion System) Engineering are discussing next steps. Constraint is to LH2 ordnance installation.’

The piece of aluminum is deemed to have broken off Atlantis’ LH2 umbilical plate, around the circumference of the GSE bolt/pin, before jamming between the two elements of hardware. This may have been the cause of the original issues with the removal of the GSE bolt/pin.

Evaluations will relate to successful removal of the pin, and the condition of Atlantis’ LH2 umbilical plate, with the resulting decision ranging from clearing the plate to fly as-is, to demating Atlantis from the tank for repairs.

UPDATE: Morning meetings have concluded with a forward plan of separating the two umbilicals as far as possible – to around six inches. This will allow for the removal of the aluminum material from the guide pin.

A large amount of overnight information is now available per L2. A new article will follow later today.

This will be followed by a full evaluation of Atlantis’ LH2 Umbilical hardware for a potential repair in situ, which would only impact operations by one day. If the damage is deemed to be serious, Atlantis would have to be demated and rolled back to the OPF – though this is an absolute worst case scenario.

Other S0004 (mating) operations are continuing in tandem – though the successful resolution of the LH2 umbilical issue is required to remain on track with Saturday morning’s rollout to the pad. A handful of contingency days remains in STS-125’s flow, should there be a delay to rollout.

‘S0008 Shuttle Interface Test. Preps are in work, Call-to-Stations is scheduled for tonight at 2300 hrs.’

Only one issue remains to be of concern with Endeavour’s supporting STS-400 LON (Launch On Need) role, relating to continued evaluations that are taking place on clearing ET-129.

The tank has been undergoing days of X-ray and borescope evaluations into an audible metallic noise that was heard during the transition from horizontal to vertical inside the VAB, soon after its arrival from the Michoud Assembly Facility (MAF).

So far, nothing has been found inside the tank, and the plan continues to press ahead toward mating with the twin Solid Rocket Boosters (SRBs) that await the tank in High Bay 1.

Endeavour herself has received some good news – in relation to her processing flow timelines – after engineers decided to opt for a bypass/jumper solution to the problematic Off Nominal O2 System 2 Pressure Transducer valve.

This was the second of two options, the first relating to a process that would have called for the removal and replacement of the box/panel (MO10W) containing the faulty valve – which would have taken over two weeks of 24/7 operations.

The second option related to bypassing the valve, which removes a large degree of strain from her timelines as it takes far less work to carry out.

‘The PRCB (Program Requirements Control Board) reviewed this problem on Friday and agreed to proceed with an MR (Material Review) to install a jumper tube for MO10W. This repair will leave the MO10W panel in place. Jumper tube mock up fit check was performed Saturday.’