Atlantis’ rollover to the Vehicle Assembly Building (VAB) on Monday has been delayed due to tropical storm Fay, while a waiver was ordered for her Nose Landing Gear (NLG) – which has now been successfully raised.

Meanwhile, an engineering plan has been drawn up to remove and replace a bent line in Endeavour’s Fuel Cell 3 (FC3). UPDATE: Weekend work noted a more serious issue, relating to an O2 crossfeed valve in the ECLSS system – with potential STS-400 milestone impacts.

Atlantis is waiting to depart from her Orbiter Processing Facility (OPF-1), for the short journey to the VAB, as STS-125’s launch date draws ever closer.

This week has seen one of the final issues all but cleared, following the confirmation that the margins relating to the OMS pod blanket-to-tile ‘step’ are positive.

‘Did discover one area (0.06 inches positive step by 0.08 inches). Analysis of this specific point results in a negative margin in bond between blanket and OMS pod.

‘The analysis is fairly conservative; it assumes tile has already been degraded down 0.5 inch, with entire axial load applied to this point. Assuming only degraded down 0.35 inch results in positive margin.

Will discuss this issue with OPO (Orbiter Project Office), along with rationale for accepting as an MR (Material Review) condition.’

However, with Atlantis sat on the OTS (Orbiter Transporter System) ahead of rollover, a level of concern has been noted with the previously reported issue relating to the orbiter’s NLG. 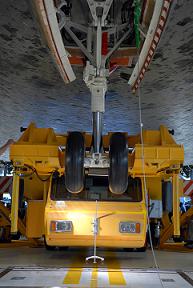 The problem was first found during the raising of the gear ahead of rollover late this week, when it failed to retract and lock properly during door closure operations.

Engineers in OPF-1 believed they had found the reason for the problematic retraction of the gear, when an uplock hydraulic actuator and associated linkage were observed to be in the wrong position.

Closeout photos showed the actuator was extended prior to closing the doors, when it should have been retracted.

Once the NLG doors were in the closed position for latching, the actuator could not extend and perform the latching, since it was already extended with the linkage in the wrong configuration.

The initial fix simply involved configuring the system correctly, before raising the gear and re-closing the doors. However, contractor Boeing raised some last minute concerns on the possibility of ‘overstressed conditions’ in the linkage hardware.

Engineers borescoped the suspect link to ensure there was no damage to the system, ahead of closing the doors for the final time.

‘Nose Landing Gear (NLG) did not retract, update: Troubleshooting indicated that the pyro assist linkage was disengaged, which caused the hydraulic actuator to disengage not allowing the uplock to engage,’ confirmed processing information.

‘The pyro assist linkage and hydraulic mechanism were reset and returned to proper configuration. Borescope inspections were performed to confirm no physical damage. Moving forward.’

However, late on Friday, the operation to raise the gear still hadn’t been carried out, due to concerns raised by JSC Engineering that the clevis in the NLG system may have been cracked during the operation.

Engineers again carried out an inspection and found no cracks. Regardless, analysis is continuing, with confirmation that all parties are happy expected sometime on Saturday – at which point the gear can be raised and the doors closed for rollover.

It is unlikely that the hardware has suffered any damage, with all related departments simply ensuring the system is confirmed to be in perfect condition ahead of flight.

UPDATE: The gear was finally raised on Saturday afternoon, after a telecon relating to the analysis passed the gear fit for one mission.

A waiver will be required for STS-125, with the gear set to undergo a strip down once she returns from the mission.

Rollover has been delayed due to tropical storm Fay, which is due to hit KSC early in the week. No impact to the schedule, 11 days contingency in the flow – more on Monday.

While the NLG troubleshooting delayed the Orbiter/Orbiter Transporter System (OTS) operations – no weekend work was originally planned on Atlantis, allowing for engineers to catch up with operations to finalize the vehicle for her short trip to the VAB.

The S0044 Countdown Sim did take place on schedule on Friday, which involved the Launch Team and some of the STS-125 Ascent Team.

The sim is used to fine-tune controllers, by throwing in problems during the countdown – in this sim’s case, three failures were used to challenge the teams during both the morning and afternoon runs.

Endeavour is in parallel processing with Atlantis due to the unique version of the Launch On Need (LON) requirement, which will see her sat on Pad 39B at the same time Atlantis launches from Pad 39A.

Her flow had moved into closeouts, in preparation for rollover to the VAB next month. However, a routine NASA Quality inspection found one of the lines in FC3 to be bent, and thus out of spec with the required flight configuration of the power generating unit.

Orbiters have three fuel cells, which are located under the payload bay area in the forward portion of the orbiter’s midfuselage. The Fuel Cells operate as independent electrical power sources – each supplying its own isolated, simultaneously operating 28-volt dc bus.

Engineers decided to replace the bent cooling line in FC3, which will involve its replacement line being welded into the Fuel Cell. Normally this would be carried out in a nominal part of the processing flow, but given Endeavour is undergoing closeouts, impacts to her rollover schedule are being assessed.

‘Over the weekend, the damaged line will be removed and a fit check of a new line will be performed. Cleaning is also planned. Reinstallation is scheduled for Monday. Impact to midbody closeouts and Payload Bay closure will be assessed based on the success of this schedule.’

Payload Bay Door closure was set for the weekend, before being delayed for the work to be carried out on the Fuel Cell. Wing Leading Edge Sensor System (WLESS) flight battery installation is also delayed until after jack transfer.

A replacement Rudder Speed Brake (RSB) Spring Tab installation has also been finalized, following a 24 hour cure time to its bonding with the thermal barrier.

UPDATE: O2 crossfeed valve in the ECLSS (Environmental Control and Life Support System) system issue. Testing to take place next week, with potential donation from Discovery – due to lack of available part at KSC.

Potential impact to STS-400 processing milestones, due to 24/7 work to replace – more on Monday.

Other work taking place inside Endeavour’s OPF-2 includes troubleshooting to an off-nominal O2 System 2 Pressure Transducer, along with weekend work on her Thermal Protection System (TPS).

Meanwhile, the External Tank (ET-129) that is set to fly with Endeavour continues to undergo an extensive series of checks into what – in the worse case scenario – may be a foreign object inside the LO2 tank.

‘ET Suspect noise troubleshooting picked up with X-Ray inspections of LOX feedline, GH2 pressline, and G02 pressline,’ noted processing information, as engineers work through all areas of the tank.

Work on checking the ET – which may be found to be clear of any problems – will continue into next week.