Atlantis waits on the weather – Endeavour’s faulty valve in focus 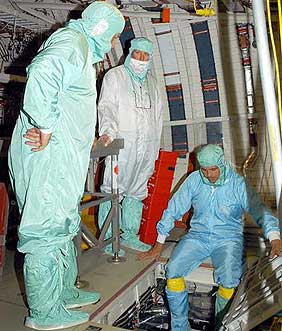 Due to poor weather relating to Tropical Storm Fay, Atlantis remains in her Orbiter Processing Facility (OPF-1), with rollover now likely to be rescheduled for Thursday – with the Kennedy Space Center closing on Tuesday. 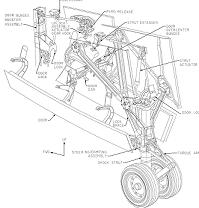 Atlantis is now issue free, following the successful resolution to a problem relating to the raising of her Nose Landing Gear (NLG) and door closure for rollover.

That came following weekend teleconferences involving Boeing and JSC Engineering, which confirmed analysis in the OPF showed no damage to the hardware during the original problematic raising of the gear. The gear was then successfully raised on Saturday.

Atlantis was due to rollover to the Vehicle Assembly Building (VAB) at 8am on Monday. However, due to weather relating to TS Fay, this has been delayed to NET (No Earlier Than) Tuesday morning.

‘VAB rollover and S0004 Orbiter/ET Mate were called off for today due to the threat from TS Fay. Rollover has been rescheduled for NET tomorrow.’

However, this is likely to take place on Thursday, given the interruptions to the flow relating to rolling over prior to a storm – which is due to affect the area over Tuesday and Wednesday – would result leaving Atlantis hanging next to the stack in the VAB.

With 11 days of contingency in the flow, managers are likely to wait until the storm passes, in order to allow a smooth transition from OPF, to VAB, to mating operations with ET-127 and the twin Solid Rocket Boosters (SRBs).

Work through the weekend also took place on Endeavour, with three items of interest relating to her flow towards supporting her older sister Atlantis – as the STS-400 LON (Launch On Need) contingency shuttle.

The first item is already near-resolved, as the bent line on Fuel Cell 3 (FC3) was removed, with a new line welded into place. Work on this issue will move into leak checks this week.

As reported on Saturday, a new issue has been noted with Endeavour – which has a threat to the STS-400 schedule. This relates to an O2 crossfeed valve in the ECLSS (Environmental Control and Life Support System) system.

These systems interact to provide a habitable environment for the flight crew in the crew compartment in addition to cooling or heating various orbiter systems or components.

The faulty valve is located in what is called the N2/02 panel – which is located in the middeck, near the orbiter’s toilet. Engineers have been working through the weekend to access the box containing the valve.

The system’s valve will be tested in full via a BOB (Break Out Box), which will electrically test the valve for specific faults – though it seems certain that the valve will be replaced. Such a replacement is not available as a spare at KSC until October, thus a donation from Discovery will be required.

The fault was noticed as part of the 10 day ECLSS GN2 decay test – which started on Friday. Impacts to the schedule for Endeavour’s rollover to the VAB next month will be evaluated as the system is repaired.

Other work taking place in OPF-2 includes the Main Landing Gear (MLG) strut hydraulic level checks, which will be performed today. The Main Engines (SSMEs) will also be configured for rollover, while the brake anti-skid and nose wheel steering checkout will pick up on Tuesday.

Over in the VAB, evaluations into the metallic noise – heard from inside External Tank (ET-129) during the transition to the horizontal – has yet to find any items of interest via X-ray checks thus far.

Visual inspections at the base of the LOX feedline through the umbilical will take place this week, prior to borescope inspections, though operations are being interrupted by TS Fay.

‘Intertank Access Kit installation is in work along with borescoping as the access is installed. Tank vent, visual inspections of feedlines, and LO2/LH2 17” flapper valve verification/inspections are on hold due to T/S Fay.’

Engineers are also evaluating minor foam damage to the tank due to a fault with a personnel lifting device.