Less than a month after ET-127 left the Michoud Assembly Facility (MAF) for STS-125, an around-the-clock effort has managed to accelerate the completion of ET-129 – which will ship today for Endeavour’s STS-400 and STS-126.

The early shipping of ET-129 will hand shuttle managers additional ammunition for their wish to accelerate the launch date for STS-125 (to October 5) in order to aid the opportunity for STS-126 to move up a few days in its November launch window.

Only a matter of a week ago, MAF processing reports pointed to ET-129’s shipping date as around August 12, which was brought down to August 8 at the end of last week. However, another huge three-shift weekend effort has successfully advanced the completion date to August 5 – for shipping on Wednesday.

‘Pegasus Barge is moored up at MAF awaiting the tank. MAF work on ET-129 is expected to be completed today and loaded on the barge tomorrow,’ noted MAF/Lockheed Martin processing information. ‘Estimated arrival at the KSC VAB Turn basin is 8/12.’

Previously, shuttle managers had noted that the tank had to be completed by August 2 in order to allow the August 14 Program Requirements Control Board (PRCB) meeting to approve the original CR (Change Request) that would advance the launch date for STS-125 to October 2.

This CR was then modified to an October 5 NET (No Earlier Than) for STS-125, which would place ET-129’s now confirmed completion date right on the required timeline. Other factors are also in play, such as the STS-125 hardware delivery to the pad, and ‘crew loading’ timelines.

Should all go to plan, STS-126 would move up to November 7, which would gain three days in a window that is restricted by a beta angle cut-out that kicks in on November 25.

‘Reason for change: Increase launch opportunities for STS-126 before the Launch Beta angle cut-out in November/December,’ noted the associated presentations on L2. ‘The 10/05 date allows adequate time for HST payload processing prior to installation.’

With November 25 being the last opportunity for a launch until early 2009, the work-around solution to the problem noted as YERO (Year End Rollover) – which requires a modification to flight software on the orbiters and new ground procedures – has also been stood down.

The YERO problem relates to the shuttle orbiter’s computers needing to reset through a change of year, which could cause a glitch on orbit. The problem that was first highlighted when Discovery’s STS-116 launch window was restricted to launching before the mission could overlap the change of year.

While a contingency was already in place – involving the orbiter remaining docked to the International Space Station (ISS) during a YERO event – a final solution was requested by then-shuttle manager Wayne Hale, and subsequently solved by MOD (Mission Operations Directorate) engineers and controllers.

‘The YERO team received good news last week. The Shuttle Program does not require the capability to fly STS-126 over the end of the year so MOD can stand down on the additional work planned,’ noted an August 4 memo.

‘The only YERO scenario that would be under consideration would be for a rescue mission but we can defer that work until call up if it occurs. Thanks to (the team) for their continued excellent leadership of this topic and to the YERO team for all their hard work.

‘The YERO team will determine what work should be closed out and what should be put on the shelf for next year if required.’

L2 Members: Refer to TAG keyword ‘YERO’ for the related presentations and memos.

Also noted this week has been the advancement in plans to solve the SARJ issue on the Station – centering around an ambitious plan to replace the race ring on the starboard hardware that rotates outboard solar arrays to track the sun. 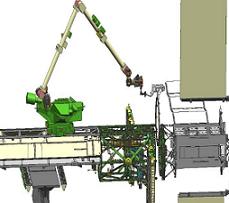 The effort, which may involve around 10 EVAs in total – several before, during, and after a shuttle mission – calls for the installation of structural supports between the two segments of the SARJ/Truss – allowing for the hardware to be jacked apart to make room for the new race ring that would then be clamped into place. This plan is called SARJ XL.

‘As you know, we have a very serious problem with the rolling surface of the stbd Solar Array Rotary Joint (SARJ) inboard race ring,’ noted information on an August 4 memo on L2.

‘As the teams continue to evaluate possible root cause for the spalled surface, an integrated team of engineers, MOD folks, and other have come up with an innovative scheme to potentially take the single spare race ring and insert it between the existing spalled inboard race ring, and the other spare ‘outboard’ race ring.

‘This would allow all of the electronics (data and power) that feed the sensors and drive/lock mechanisms to continue to be provided inboard of the rotating plane which preserves critical redundant features of the design. Additionally, this re-established the full race ring redundancy on the stbd side.

‘The engineers who came up with the idea called it XL for ‘extra large’ – one possible method for inserting this ring in the truss area after jacking out the truss segment holding the solar arrays. This is only a possible option and may not be the one selected.’

Challenges remain with this plan, notably with extending the umbilical connections – with additional work required on the plan before the program approves the option.

‘This effort is a high priority for the ISS Program and you will likely be hearing quite a bit about it in the near future. The Program approved creating an official CR for this effort moving it from the conceptual to the implementation phase.’

Also on the ISS, the Canadian Special Purpose Dexterous Manipulator (SPDM – otherwise known as Dextre) is undergoing final testing before being operational for its tasks on the orbital outpost.

Loosely designed the human form – with a torso, a head area with cameras and several arm appendages – it rides on the end of the SSRMS (Space Station Remote Manipulator System) as a special dexterous tool.

Supporting EVA-based maintenance is also part of its role, with the preposition of ORUs or Integrated Assemblies, the provision of lighting and camera support, and is it is also capable of actuating external mechanisms, performing inspection tasks, and extending reach of SSRMS.

‘SPDM: The flight team is working hard to check it out and ensure that its systems are working properly,’ noted information this week.

‘Once the tests are complete, and appropriate software updates are provided later this year, the teams are working towards the first official use of the SPDM to change out a RPCM (Remote Power Control Module) power switch module.

‘The checkouts over the last week have been going well, so we are well on our way to using this wonderful new capability.’

ET-127 mated to Atlantis’ boosters – JSC closed due to storm