Repaired MFR redelivered to KSC – Rollout delayed due to Hanna

The Manipulator Foot Restraint (MFR) assembly – that will be attached to the end of Atlantis’ robotic arm – has arrived back at the Kennedy Space Center (KSC), in time to be installed as part of the STS-125 payload on Tuesday.

Meanwhile, the threat of Hurricane Hanna has delayed the rollout of STS-125 until the weekend. Atlantis was orginally set to leave the Vehicle Assembly Building (VAB) just after midnight on Monday.

Atlantis’ trip to Pad 39A has been delayed, following weather briefings.

Atlantis and the STS-125 stack were ready to leave on time at just past midnight on Monday, but poor weather at the Kennedy Space Center (KSC) means managers will need to wait 24 hours to assess if rollout can take place the following night.

At present, due to the threat of Hurricane Hanna, rollout may be delayed until the weekend – this has now been confirmed. New article to follow shortly.

The Manipulator Foot Restraint (MFR) is a work platform that provides restrained access to EVA worksites within reach of the Shuttle Remote Manipulator System (SRMS). It can be easily attached to the end of the robotic arm.

The MFR provides the astronaut positioning and restraint at the worksite location selected by the crew. In addition, it has a tool restraint deck and a safety tether. The restraint can also be adjusted for work activity by the space suited astronaut.

Soon after the hardware arrived at KSC, engineers noticed damage on a support bracket, which was observed to be fractured – specifically a sheared gusset plate. The damage likely happened during transit, though this remains under investigation.

‘MFR was received with shipment damage at KSC. They returned it (three days later). Teams came in over (that) weekend and began creating plans. Engineering is also looking at alternatives for repair,’ noted information at the time, before adding that additional damage ruled out a repair at KSC.

‘Early on, discussed doing repair at KSC using offline shops. However, there may be collateral damage other than just this one bracket area. Will do more detailed inspection. Have relief to install at pad, and think that is prudent.

The repair at the Johnson Space Center (JSC) replaced the support bracket and associated bolts, as engineers targeted a return date of August 27. This slipped just 24 hours – due to the recent poor weather at KSC. 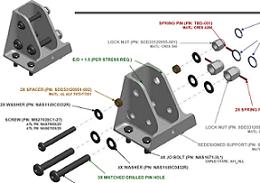 ‘The MFR rework following the damage from the shipment to KSC: No mechanical (ie, moving) parts have been removed or replaced,’ noted a large associated presentation by JSC Engineering. ‘Only non-moving structural parts have been replaced (support bracket, three threaded fasteners, and four Jo bolts).

‘The MFR has been inspected by non-destructive means and analyzed to verify that no ‘collateral’ damage occurred as a result of the damage observed from shipment to KSC. No evidence of damage/defects was found. All MFR mechanisms (moving parts) were found to be undamaged.’

A level of debate took place ahead of shipping the hardware back to KSC, relating to additional acceptance vibration testing, which became a topic of interest at one of the pre-Flight Readiness Reviews (FRR). The bulk of the MFR presentation explained the reason additional testing was not required.

‘Although full external inspection and analysis was performed, it is impossible to assess any internal damage to mechanisms or structural brackets, pivot shafts, cable pulleys, etc.

‘The acceptance level vibration requirements for MFR are for workmanship – to verify that the assembly work was completed correctly. Conclusion/Recommendation: An additional acceptance vibration test is considered to be an ineffective screen for identifying collateral damage post shipping event.

‘It is the position of the JSC EVA and Structures team that the risk of additional testing out weighs the risk buy down achieved from the results of any additional acceptance vibration testing.

‘The JSC EVA and Structures team believes that the screens that have been performed to evaluate the MFR (due to the shipping damage) are adequate. Continue processing as currently laid out – post KSC shipping inspection/functional test. Do not perform additional vibration testing on the MFR.’

A review is still taking place into how the hardware became damaged in the first place – although that will prove to be a difficult task, due to it being an ‘awkward’ and relatively fragile structure.

‘Every handling event of the MFR has a potential to damage the MFR. The MFR is an ‘awkward’ structure to handle,’ added the presentation. ‘When moving the MFR, there are only certain areas that should be ‘held’.

‘This requires that the hardware to be constantly supervised by a ‘knowledgeable’ individual during transportation and testing. Every additional test represents a risk to the MFR that needs to be weighed against the value added of the test.

‘The failure of the MFR attached bracket happened because the MFR was subjected to a transportation and/or handling issue where maximum loads exceeded the capability of the bracket. Unfortunately, the worst case fault environment could not be quantified.’

Given the hardware is designed specifically for Hubble Servicing Missions (HSM), this will be the last time the MFR will be seen in action. Interestingly, associated notes appears to point towards a plan to give the MFR a funeral on orbit.

‘Will probably put in a manifest change reflecting that EVA doesn’t want this back after flight; it can be disposed of on-orbit,’ added a note on a recent Shuttle Stand-up/Integration report.

No confirmation of this decision has been documented at this time – although it will have no longer have a purpose after the final EVA on STS-125. Exactly how the MFR will be disposed of is unclear.

While plans are still alive for an Orion servicing possibility, the MFR will not play a part in such a mission. Regardless, the current plan continues to point towards the space telescope being deorbited sometime in the next decade – depending on its health.