With the realignment of STS-119’s No Earlier Than (NET) launch date now set as February 12, 2009, the Program Requirements Control Board (PRCB) has taken the next step in planning the critical mission to deliver the final set of solar arrays and batteries to the Space Station – the Delta Launch Site Flow Review.The S6 element of the Integrated Truss Structure will be the primary (and largest) component of Discovery’s 15A payload package that also includes MAUI, SEITE, and SIMPLEX.

Part of the initial planning for the STS-119 mission is the compilation of milestones for the 191 day processing flow for Discovery.

Some of these milestones include ET door and landing gear functionals, Thermal Protection System (TPS) work, main engine installation, the Crew Equipment Interface Test (CEIT) on November 22, and the closing of the ship’s payload bay doors.

The initial processing milestone chart shows Discovery being ready to roll to the Vehicle Assembly Building (VAB) before the Christmas holiday. Nevertheless, a tentative rollover date of January 5, 2009 provides contingency time and preserves the Christmas holiday for Discovery’s workforce. 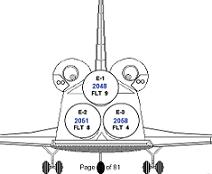 Also noted in the 81 page PRCB presentation, available to download on L2, is the allocation of the three Main Engines (SSMEs) that will help power the vehicle to space.

Aside from the normal Thermal Protection System (TPS) processing and repair work that takes place during every Orbiter’s flow, Discovery will see the addition of seven BRI (Boeing Rigid Insulation) tiles around her main landing gear doors.

Also on tap for Discovery’s TPS is the application of a specially modified tile for a program Detailed Test Objective (DTO). This one tile will have a slightly raised surface to create a Boundary Layer Transition during reentry.

Originally scheduled to be conducted on Endeavour’s STS-126 mission later this year, the Boundary Layer Transition DTO was moved to STS-119 due to processing constraints on Endeavour ahead of her unique LON (Launch On Need) support role for Atlantis’ flagship STS-125 mission.

To help mitigate some of the risk associated with this DTO, a total of three TPS tiles downstream of the protuberance will be changed to eliminate the risk of overheating in these areas.

In addition to this mitigation effort, thirteen temperature sensors will be installed in surrounding TPS tiles.

In all, 22 tiles and 20 gap fillers will be affected during TPS modifications for this DTO.

Also noted for this processing flow is the Removal and Replacement (R&R) of a Power Drive Unit on the Body Flap, a Russian Actuator change out, the removal of some RCC (Reinforced Carbon Carbon) panels for Wing Leading Edge Corrosion inspection, and the potential R&R of a Power Drive Unit for the ET doors.

In addition to the processing milestones, the Delta Launch Site Review also notes changes to the Ascent Performance Margin for the mission. Current assessments of all the vehicle’s flight hardware, payloads, and propellant margins show a net gain of 878 lbs.

Another example of the in-depth nature of this mission planning document is the calculation of the landing and ferry weight requirements for Discovery.

An extensive analysis reveals the various targeted touchdown weights for Discovery in the event of an emergency landing such as an RTLS (Return to Launch Site), TAL (Trans-oceanic Abort Landing), or AOA (Abort Once Around) as well as the nominal End of Mission (EOM) weight for the orbiter.

While the nominal EOM, RTLS, TAL, and AOA landing weights are all within program and mission limits, the Contingency Return weight of Discovery exceeds programs limits.

Mission baselines show a maximum nominal EOM weight for Discovery being around 233,000 lbs with a projected Contingency Return weight of 234,294lbs.

In addition to the three baselined modifications for Discovery, there are three potential modifications discussed in the PRCB Review document.

The first of these modifications relates to the Mid-Deck partition.

‘Lexan will cover the entire surface of each partition (excluding trash bag area).â€

The second modification would be to the Auxiliary Power Unit (APU) gaseous nitrogen quick disconnect heater.

‘Potential mod being evaluated to add a heater element to the fuel tank pressurant GN2 service QDs as a mitigation of the APU fuel tank pressure decay seen during the STS-121 and STS-123 missions,’ added the presentation.

‘Design options being evaluated to mitigate liberation of RSB thermal clips as occurred during STS-124,‘ noted the PRCB baseline – with a new, expansive presentation on the RSB thermal tab status acquired from the August 7 PRCB, with an article to follow next week.