STS-125: Atlantis on track for Monday rollover to VAB

Atlantis’ extended stay inside OPF-1 (Orbiter Processing Facility) is coming to an end, as she prepares for the short trip to the VAB (Vehicle Assembly Building) early next week.

In parallel processing, Endeavour is also on track for her rollover in the middle of next month in support of STS-400, as the shuttle program works through the fascinating dual flow surrounding STS-125’s mission to service the Hubble Space Telescope.

Atlantis is being placed on the OTS (Orbiter Transporter System) during Wednesday processing, ready to be carried over to the VAB for mating operations with External Tank ET-127 and the twin Solid Rocket Boosters (SRBs).

Work on the ET/SRB stack has proceeded well, with a prompt resolution to the slightly out of spec washer on a bolt connecting the tank to the right booster, allowing the mating date of August 18 to remain on schedule.

‘In the VAB – on the ET/SRB closeouts, are in work with the closeout around the upper and diagonal struts,’ noted Ground Operations. ‘Also, are working the forward crossover closeout. Target for rolling orbiter over to the STS-125 stack is on August 18.’

Atlantis has been undergoing final closeout operations inside the OPF, ahead of being placed on the OTS. Processing has also included the final pressurization of her tires for flight.

‘Final hatch closure was completed. The hatch had to be briefly reopened for a tile repair that was discovered when the hatch was initially closed,’ noted processing information. Hatch soft cover removal and hard cover installation was completed.

STS-125’s rollout from the VAB to Pad 39A is set for August 26, scheduled for the usual time of just after midnight. The pad has been repaired, following the damage to the Flame Trench walls during STS-124’s launch, although a few additional repairs will be carried out this week.

‘At Pad A, completed wall repairs. Did some of the inspections; found a couple of areas at the base of the main flame deflectors that require some repair. The plan is to bring the contractor back on this week and affect those repairs. Shouldn’t be any problem getting those completed this week.’

The only outstanding issue ahead of rollover is a ‘Loads Panel’ review on a measurement spec relating to the area where the blankets meet the tiles on the OMS (Orbital Maneuvering System) pods – known as the ‘step’.

As seen a few times on recent missions, the blanket has a tendency to protrude away from the pod surface during ascent, usually with no detrimental fallout on being able to re-enter as-is.

The one time an EVA was required was during STS-117, when Danny Olivas was transported to the aft of Atlantis to push down the blanket by hand, before securing it with staples and pins.

A positive outcome is expected from the review data, which is likely to show there is a positive margin on the ‘step’ between the blanket and the tiles on Atlantis’ OMS pods for this mission.

‘Waiting for the results at Loads Panel for the environments for the OMS pod blanket. If the environments come back the same, then we are done; have already showed that we have positive margin on all the tiles,’ noted JSC’s Orbiter Project.

‘If the environments only increase as much as they are expected to increase, it will also probably have positive margins, but we will go through the rigor and do that analysis, which should be complete by the end of the week. Hopeful that either way, it will come out positive.’

As a contingency, shuttle processing is working with NASA SE&I (Systems Engineering and Integration) and the Orbiter Project on the blanket review to understand if there is any work to do prior to rollover.

Processing with Endeavour continues to keep within the timelines, which will add confidence ahead of Thursday’s Program Requirements Control Board (PRCB) meeting to discuss the potential of approving a CR (Change Request) to both STS-125 and STS-126’s launch dates – in order to aid Endeavour’s restricted launch window in November.

The flow inside OPF-2 has also been concentrating on the scheduled closeouts to the orbiter ahead of a mid-September rollover to the VAB for her mating with ET-129 and then-attached SRBs. 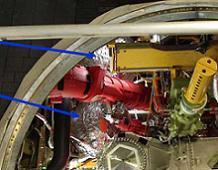 A couple of engineering challenges are being worked through by United Space Alliance (USA) engineers, with weekend work to changeout GN2 poppets on an Auxiliary Power Unit now completed, along with troubleshooting on the Master Timing Unit (MTU) – which is now in a calibration test period.

The replacement of the Inertial Measurement Unit (IMU 1) is also taking place, with the installation of a replacement unit set to take place on Wednesday – followed by calibration checks on Thursday.

‘Over the weekend, completed the change out of the GN2 APU poppets. Continuing to work ET doors step and gap. Plan is to do ET door functional this Wednesday,’ noted Ground Operations. ‘In the midbody, are working bay closeouts. Will close PLBDs (Payload Bay Doors).

‘On STS-126, will be doing the orbiter SSME gimbal clearance test mid-week,’ added Pratt & Whitney Rocketdyne/KSC on the status of Endeavour’s Space Shuttle Main Engines (SSMEs). ‘When do that, will have the SSME controllers powered up to look at all the data and check harness integrity.’

Endeavour’s tank (ET-129) is now in High Bay 2’s Checkout Cell inside the VAB, undergoing final checks ahead of being lifted over for mating with the SRBs at the end of the month.

An ET/SRB mating review will take place on August 22, although one item of interest has already been noted by engineers working with the tank – which is now the subject of an engineering review.

‘Looking ahead, are preliminarily targeting the STS-126 ET/SRB Mate Review for August 22. Will put the letter out in the next day or two. Scheduling August 29 for the Orbiter Rollout Mate Review for STS-126.

‘ET-129 arrived safely at the KSC dock and was transported to the VAB Transfer Aisle. Lift in to High Bay-2 East checkout cell was complete at 02:39 EDT.

‘As the tank was lifted to vertical, technicians reported hearing a metallic sound coming from the inside of the tank. (Notes) were taken to document this issue. Engineering evaluation is in work.’