Atlantis’ LH2 ET Umbilical hardware damage has been repaired – with final clearance of the issue for flight now approved by the Program. Rollout is expected shortly after midnight next Tuesday.

Also taking place in the Vehicle Assembly Building (VAB), Endeavour’s External Tank (ET-129) is being lifted over to its two Solid Rocket Boosters, as the STS-400 stack – which will eventually become STS-126 – starts to take shape.

Yet another fine engineering effort has made light work of the issue on the LH2 umbilical, which involved the blending and polishing of the damaged metal – following a problem during orbiter/ET mating operations at the weekend.

‘LH2 aft jack bolt, update: The area of missing metal has been blended and polished and eddy current testing was completed with good results,’ noted Thursday processing information. ‘Post-work mold impressions were completed and final analysis is in work.’

The mating operation suffered the issues when one of the LH2 GSE (Ground Support Equipment) guide pins was deemed to be slightly out of sync when the orbiter and ET were slowly jacked together to hard mate – resulting in minor damage, along with making it difficult to remove the pin.

During mating, the guide pin is pushed through from the ET side, with a threaded stud used to draw the orbiter and ET umblicals closer together to the point of mating. Once engineers managed to remove the pin, a small gouge was observed on the umbilical plate. 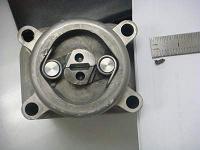 It has since been noted that the guillotine valve – which has two spring loaded halves that open up for the stud to pass through – on the ‘pyro can’ was the likely cause of the problem.

A replacement pyro can is now being installed on Thursday.

‘The new pyro can is scheduled to be delivered for installation this morning. Following pyro can installation, the MPS (Main Propulsion System) purge lines will be re-installed and a final inspection and cleaning of the umbilical will be performed before mate. Updates from last nights work will be presented to the Program today.’

UPDATE: As expected the Program passed the repair as acceptable for flight, allowing operations to press ahead with the rollout to Pad 39A on Tuesday – scheduled for just after midnight. Atlantis is expected to arrive at the pad just after dawn.

Only one or two days of contingency remains in the STS-125 flow. However, a number of recent flights have managed to keep to their scheduled launch dates with no contingency days remaining – and the current launch target for STS-125 remains unaffected by the delay to rollout.

UPDATE: However, the continued pressure relating to the payload flow for Atlantis has resulted in managers noting that STS-125’s launch date is likely to slip to October 11 – article to follow.

Only one engineering ‘get well’ is now being worked with the dual processing flow that is supporting STS-125  – relating to Endeavour’s STS-400 Launch On Need (LON) requirement – namely the continuing work on the faulty O2 System 2 Pressure Transducer valve.

Following the decision not to remove and replace the box containing the troublesome valve – which would have placed a large amount of strain on Endeavour’s processing timelines – engineers have been working on installing a bypass ‘jumper’ tube in situ.

This is set to take place on Friday, along with additional work relating to minor issues found in the related hardware.

‘Off Nominal O2 System 2 Pressure Transducer update: MO10W jumper tube operations are in work. An x-ray of the brazed joint indicated a failure, so the joint was cut, re-brazed, and x-rayed yesterday,’ noted Thursday processing information.

‘In addition, a small kink was found on the -052 tube near a clamp location. The tube will be R&Râ€™d. Jumper cleaning picks up today in preparation for installation tomorrow.’

In the VAB, ET-129 – recently cleared after evaluations into the noise heard coming from within the tank during its transition from the vertical to the horizontal found no evidence of FOD – is being lifted over to the awaiting SRBs for mating, known as S0003 operations.

The stack will be joined by Endeavour in the middle of September – pending a successful resolution to the O2 System 2 Pressure Transducer valve work, and the completion of closeouts ahead of rollover.

Endeavour’s flow is proceeding to plan, with work taking place on preparing the orbiter’s landing gear for flight.