The hugely successful modifications to the Extravehicular Mobility Unit (EMU) gloves – brought in after the aborted STS-118 EVA-3 – will be given its first test during a Hubble servicing mission next month.

Due to the balance between dexterity and protection during STS-125’s EVAs, a plan been drawn up for when the spacewalkers will use the modified and non-modified gloves – especially during the complex tasks of EVA-3.

The danger was then highlighted by STS-118 spacewalker Rick Mastracchio, who was sent back to the Quest airlock after a cut was observed in his glove during the mission’s EVA-3.

As a result of the two incidents, engineers were tasked with designing extra protection into the glove, along with regular glove checks, which are now commonplaceÂ during allÂ spacewalks.

The immediate solution brought in was the “overglove” – debuting on STS-120, and modified again for STS-122 – which more than served its purpose in protecting astronauts carrying out assembly work on the outside of the International Space Station (ISS).

However, the overglove reduced some of the previous dexterity that EVAers enjoyed, meaning several elements of spacewalks had to be carried out with the removal of the additional protective layer.

As always, engineers went about finding a middle ground solution, designing a new modification to the EMU gloves, one which added protection in the key risk areas of the glove, whilst allowing the spacewalker to have most – but not all – of the dexterity he required.

Known as the ‘Glove TMG (Thermal and Micrometeoroid Garment) Protective Patches’ – or the Modified/Turtle Skin glove – the modification made its debut during STS-124, as was deemed as a complete success by Ron Garan and Mike Fossum.

The modification to the glove comes in the form of Turtleskin patches, sewn into the thumb and index finger regions – which are most at risk of suffering from cuts.

For STS-125, the unique tasks – compared to ISS missions – involved means full dexteritiy is required on some of the jobs carried out on the aging telescope, especially during EVA-3.

A presentation titled “STS-125 EVA Glove Plan” outlined the need to return to a non-modified EMU glove – even without the overglove – for at least one large role during EVA-3, and possibly EVA-4. 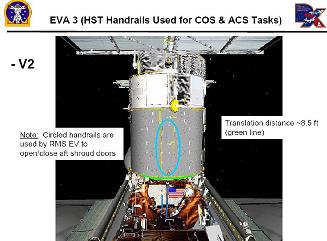 “Planned usage of Modified/Turtle Skin EMU gloves for all EVAs with the following exceptions: EVA-3: In support of ACS (Advanced Camera for Surveys) Task, EV1 (John Grunsfeld) will wear non-modified gloves (and no overgloves) to accomplish repair,” outlined the presentation.

“(Grunsfeld will be using manual screwdriver to ‘feel’ initial release of fasteners in order not to strip them. Fine alignment required to not damage hardware/tools. Interfacing with several 1/4 turn fasteners.

“On EVA 2, EV3 will determine if the Modified glove will provide the required dexterity/tactile feeling to support the STIS repair task. STIS Complex task (117 fasteners) comparable to ACS repair. 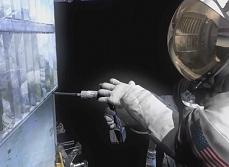 This plan is part of STS-125’s EVA Flight Readiness Review (FRR) due to the exceptions it holds in the current “Overglove Use Policy During US EVA” outlines, whichÂ were brought in post-STS-118 as part of the risk mitigation effort.

However, exceptions have been identified for this mission, as the crew will always be in the worksite of Atlantis’ cargo bay, along with all hardware – bar Hubble – being classed as new -Â thus holding less risk of being damaged by MMOD (Micrometeoroid/Orbiting Debris), which is a primary cause of cut gloves.

“Standard glove inspections during EVA and post EVA. If unexpected damage occurred, the location/cause could be quickly identified and that marked as a Warning/KOZ. Due to task locations, most of worksites on HST are never revisited.

“Non-modified glove usage plan will be re-visited if continued unexpected damage is identified on Modified/Turtle Skin gloves that would put non-modified gloves/crew at risk. Very High confidence that this wonâ€™t be the case based on past HST history.”

Five EVAs will be carried out on this mission, involving four spacewalkers – out of which only Grunsfeld is currently set to carry out tasks with the old design to the EMU gloves:

Spacewalkers will return to full use of the modified glove for the remaining shuttle missions – which will all take place on the ISS.