Endeavour has arrived in the Vehicle Assembly Building (VAB), following her rollover Thursday morning. She is now undergoing mating operations with External Tank ET-129, ahead of rollout to Pad 39B in a week’s time.

Meanwhile, yet another fine effort by workers at the Michoud Assembly Facility (MAF) has resulted in all External Tanks back on schedule for their 2009 delivery targets, as managers look into the possibility of using the damaged ET-122 for potential use with STS-134.

Rollover was nearly delayed until the end of the week by a last minute issue found during closeout inspections late last night, which related to a small hole found in one of the wheel wells.

Observations found a 0.15 square inch hole in a vinyl boot of the right side middle hinge – an area where the boot halves are glued together with RTV. The issue resulted in several hours of debate with the engineering community to approve the issue for rollover and flight – which was gained. A repair will take place after STS-126. 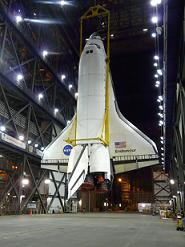 Now in the VAB, Endeavour will be mated with ET-129, a tank that has been a key driver in ensuring STS-125’s launch date kept within a few days of its previously scheduled target.

It took an around-the-clock effort by MAF engineers to ensure the tank shipped to KSC inline with the STS-400 support requirement, resulting in the ET shipping slightly ahead of schedule, which – had it not of been for payload processing delays – would have allowed the launch dates to move up a few days.

‘The ET-129 Michoud crew did a fantastic job,’ said ET Program Manager Wanda Sigur, who praised her workforce for shipping two tanks within a month of each other. ‘Certainly we rely a lot on these folks to complete the tank and get us ready to fly.

‘Remember, ET-129 is the pacing tank for the Hubble mission. So when we focused on getting ET-127 out the door, it was extremely important because we’re going to fly that tank. But having ET-129, the Launch On Need tank available to NASA is very important to make sure we do support this particular mission.

‘ET-129 saw us not only implement all the improvements and changes that were effective on ET-128, but we also were able to implement a series of producibility enhancements that showed a real attention to detail and focus on getting the job done, and doing it in a productive, effective and efficient manner.

‘We’re challenged with the extra scope we’ve implemented post-Return to Flight because we want to make sure all these tanks perform effectively. But as we get smarter and people get engaged in the process, you see tons of commitment and the great job these folks are doing.’

The commitment of the workforce could be seen during the three shift, seven days a week process that was carried out on both Atlantis’ ET-127 and Endeavour’s ET-129, with volunteers putting themselves down for an additional shift to help complete critical paths.

‘Without the extraordinary effort and dedication of this select group, along with the focused efforts of the entire department, both timely ET deliveries would not have been possible,’ added Mike McGehee, senior manager, Final Assembly and Testing.

The next four tanks due to leave MAF were up to 41 days behind schedule in July. However, despite the subsequent shutdown of the facility during hurricane Gustav’s near pass – MAF workers have successfully turned this around, with all tanks set to fly in 2009 now returning to their required delivery dates.

Gustav failed to cause any serious damage to Michoud at the start of the month, with only the dockside port – where the ETs are loaded on to the barge for transport to the Kennedy Space Center (KSC) – suffering from flooding, along with some of the facility’s VAB panels being lost.

Only 1.5 inches of rain accumulated on the ground inside the levee, requiring just one of the four pumps operated to keep Michoud dry.

‘Facility is in good shape after Hurricane Gustav. Had minor storm damage, including a few roof leaks. Biggest problem was loss of a number of panels on VAB; have put temporary watertight covers in place,’ noted Lockheed Martin/MAF. ‘Facility is intact and ready for any upcoming tropical storms for remainder of season.

‘A big problem was chilled waterline leak not related to storm that affected environments; fixes were put in place for this and they are ready to start production. Personnel returned in good shape, and have normal crews in most areas.’

‘Having eyes-on assessment of each hardware item to assure no impacts or concerns. Looking at whether environmental conditions affected work in progress, such as prepped surfaces.’

MAF’s stunning turnaround with their production schedules is thanks in part to a TIM (Technical Interchange Meeting), which was designed to find get-wells in ET-127’s delivery target. Lessons learned have resulted in a positive ripple effect on the downstream tanks.

‘We’ve been taking advantage of producibility improvements, enhancement initiatives, not doing unnecessary work – and the Collaborative Work Cells have helped out too,’ added Sigur.

The next tank due to leave MAF is ET-130, which will fly with Discovery on her STS-119 mission to the International Space Station (ISS). Launch is tracking early February, with the only critical path in the STS-119 flow relating to the delivery of a replacement RCC (Reinforced Carbon Carbon) panel for the orbiter’s right wing.

The tank’s delivery schedule is no longer a concern, following a turnaround from 37 days down on the delivery target, to just under a week – which is likely to move further to the left over the next few weeks.

‘ET-130: In final assembly. Running about five days down because of loss of time,’ added the latest tank update from MAF. ‘Feel can recover the time.’

ET-131 – set to launch with Endeavour on her May 15 mission (STS-127) – was 23 days down on the delivery schedule. However, the turnaround effort has resulted in the tank now being classed as one day ahead of schedule.

‘In Cell A. Flange closeout effort has been in process. Stopped at good places in processing, so restart should not be an issue,’ added MAF processing. ‘Working on aft interface crossbeam build-up; this is mechanical, so processing should not be affected by storm.’

Also 23 days down in July was ET-132 – manifested for Atlantis’ STS-128 on July 30. The recovery of this tank’s schedule now places it three days ahead of the targeted delivery date.

‘ET-132: Getting ready for aft dome spray. This is a critical process, and are applying very tight control over environment; holding series of reviews to culminate in a production readiness review and hope to start hardware processing immediately afterward.

‘Had LOX IFR preparation in process before storm, so will see if ready to start it (environments must be in box of temperature and humidity).’

Rounding up the tanks in major production are ET-133 and ET-134, which are documented as flying in 2009 with Discovery on STS-129 in October, and Endeavour on STS-130 in December, respectively.

Both tanks are currently a month behind schedule, but are also going through the same turnaround in processing as seen with the upstream tanks.

‘Overall, efforts are going well,’ added the latest Shuttle Stand-up/Integration report. ‘(Shuttle manager) Mr. (John) Shannon said it’s good to hear that everyone got back okay (from the hurricane).’

One tank that’s rarely mentioned by MAF is ET-122 – the tank that was damaged during hurricane Katrina, and subsequently removed from the flight manifest.

However, with continuing efforts to add at least one more mission to the schedule, ET-122 may yet gain a reprieve as the LON tank for a potential STS-134 mission.

It will also prove to be a potential boost to the extended manifest – which is currently being assessed – that calls for up to 13 additional shuttle missions (article to be published soon).

Currently, ET-138 will be the last tank to be shipped to KSC, as part of the LON support of STS-133. However, that rescue requirement has the potential of being turned into a STS-134, which will likely be based around a decision on additional funding for the delivery of the Alpha Magnetic Spectrometer (AMS).

STS-134 debuted on the latest FAWG (Flight Assignment Working Group) manifest, but only as the LON support for STS-133 at this stage, utilizing ET-138. The primary flight product of STS-134 as a mission does not currently exist.

‘Hurricane Katrina damaged ET-122 in Cell A when concrete fell from the roof and hit some areas of the tank,’ added Sigur. ‘We’ve been asked to put together a proposal about ET-122 to determine how and when the tank could be returned to the fleet for NASA to evaluate.

‘We are working on that. ET-122 could be used possibly as a launch-on-need tank or for other NASA objectives in the future.’

L2 Members: Refer to TAG keywords ‘Manifest’, ‘ET’ – for related L2 Presentations and Expansive Daily Processing Updates (from NASA and USA – and LM/MAF with the ETs).