With a month to go until the launch of STS-125, both Atlantis and Endeavour – the latter being readied for the STS-400 LON (Launch On Need) support role – are enjoying smooth processing flows.

With Atlantis already deep into pad integration work at 39A, Endeavour is set to leave her Orbiter Processing Facility (OPF) on Thursday morning, for the short trip to the Vehicle Assembly Building (VAB) for mating with External Tank ET-129.

Atlantis is on schedule in her pad flow towards the October 10 launch date target, following the completion of S0009 Pad Validation checks.

‘Working on preps for hyperload, scheduled on Thursday and Friday. Things proceeding per plan at pad. Over weekend, started on STS-125 pressure oscillation instrumentation hardware installation. This is progressing well; still have more tasks on this. Obtaining good data.’

While work with Atlantis is continuing at the pad, SSP (Space Shuttle Program) managers will meet for the Flight Readiness Review (FRR) later this week. The process is likely to take nearly two days to complete – which will result in moving to the final stage of mission approval at the Agency FRR later this month.

‘SSP FRR is planned later this week. Will put out letter for Agency FRR on September 22; folks think this will probably take 1.5 days,’ added the latest Shuttle Stand-up/Integration report.

‘(Shuttle Manager) Mr (John) Shannon said will probably need to spend a little more time at Agency FRR because of because of STS-400 items.’

As alluded to by Mr Shannon at the STS-125 media briefings earlier this week, the main topic of conversation will relate to the threat of MMOD (Micrometeoroid/Orbiting Debris) damage on this mission – an increased risk due to Hubble’s orbit and lack of protection from the International Space Station (ISS).

‘On FRR Thursday and Friday, probably biggest discussion will be MMOD risk, which will carry forward as red risk. Team is doing well showing why is this level, what mitigations are, how will perform mitigation, and if not doing mitigations, then why. This will be a big topic at Agency level.’

MMOD is the third biggest risk to a shuttle mission – behind launch and landing – regardless of where the vehicle is flying to on orbit. However, this will be the first Hubble mission to have major levels of contingency, should there be a serious strike on the orbiter’s Thermal Protection System (TPS).

If in the unlikely event Atlantis suffers notable damage, her crew have an array of repair methods they can carry out on the orbiter ahead of re-entry. 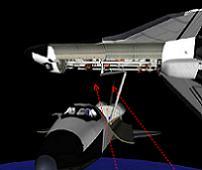 Only a major incident – comparable to that suffered by Columbia – will result in Endeavour being called on for her LON requirement.

While such a serious event is highly unlikely, NASA managers do not leave anything to chance, resulting in scenarios involving LON being heavily discussed at the FRRs.

‘Mr. Shannon has a little concern about powerdown discussion, and we will need to weigh risks to nominal mission versus protecting risk for contingency situation,’ added the Stand-up, referencing the situation where LON was required, resulting in Atlantis being powered down to become a lifeboat, until Endeavour was able to reach her sister on orbit to carry out the rescue of her crew.

Such scenarios have been planned out and simulated in depth since 2003, with a huge amount of documentation and procedures already finalized for any required contingency event, despite the likelihood being minimal at best.

‘Will spend some time at FRR making sure have all pieces of the story put together well to take to Agency FRR. Otherwise, looks like are in good shape for mission.’

UPDATE: SSP FRR delayed until next week, due to closure of JSC during hurricane Ike’s pass over the Houston area.

A ‘STS-125 Safety Briefing’ article – based on an expansive mission presentation on L2 – will be published around the FRR, showing outlining NASA’s in-depth approach to ensuring all the bases are covered for this mission.

Taking up the role of STS-400, Endeavour is on the timeline to support STS-125’s launch date.

Endeavour will be sat on Pad 39B – the final time a shuttle will take up residence on that pad prior to it being handed over to Constellation – ready to launch within three days of a contingency being called. Following standdown after STS-125’s late inspections, Endeavour will roll to Pad 39A for STS-126 launch preparations.

The youngest orbiter in the fleet is currently being placed on the Orbiter Transporter System (OTS) in preparation for the short ride over to the VAB for mating operations on Thursday – a day ahead of the previous schedule.

Forward and Aft closeouts, plus final orbiter preps for rollout – including aft door installation – have been completed, with ET doors positioned for flight. Nose and Main Landing Gear tire pressurizations and checks for flight are also finished.

‘Had couple of issues getting correct measurements on landing gear; got through Friday night and landing gear is ready to go. Doing final powerdown; weight and C.G. (Center of Gravity). Will go to OTS on Wednesday,’ noted KSC Ground Operations.

‘Are doing well on ET and Booster closeouts in VAB. Are on schedule and will pull platforms Wednesday. Will accelerate orbiter mate by one day to this Thursday; will roll to VAB at 0700 EDT.’

Once Endeavour is inside the VAB, she will be attached to the crane for transition over to her awaiting ET/SRB stack in High Bay 1. Several deviations to the mating procedure have been approved, following issues with the recent mating operations with Atlantis and ET-127.

Engineers will now follow new procedures with use of torque wrenches – preset to 100 in.lb – for the umbilical stud tensioning and installation. Previously, the engineer would ‘feel’ the torque.

An operational check will also be carried out on the guillotine valve, by inspecting and cycling it beforehand. This new procedure will be carried out on all subsequent matings, in order to avoid the issues observed with the STS-125 mating operation.