Endeavour/STS-400 arrives at Pad 39B – both sisters visible

Endeavour and the STS-400 Launch On Need (LON) shuttle arrived at Pad 39B Friday, joining older sister Atlantis – as both vehicles were revealed on adjacent pads on Saturday morning.Pad 39B is already undergoing major changes – most noticeable via early progress on the three 600 foot high lightning protection towers – as preparations continue towards the pad officially being handed over to the Constellation for the test flight of Ares I-X in 2009.

Follow the orbiters, live, through every momentÂ of their processing and missions on the world’s most read interactive live update pages for shuttle:

Endeavour waited on two weather briefings to give the go ahead for rollout, with first motion registered at 11:15pm local time. Travelling on top of the Crawler Transporter (CT2) and Mobile Launch Platform (MLP), Endeavour arrived at 39B at 6am local

Pad integration and validation work will start in earnest, as the STS-400 stack is processed to a near state of readiness, should the rescue mission be required during Atlantis’ STS-125 mission. Such a scenario is highly unlikely.

Saturday morning was be highlighted by opening of Pad 39A’s Rotating Service Structure (RSS), meaning both Atlantis and Endeavour are visible on the adjacent pads.

The last time two shuttles were visible together was back in August 1994, when STS-64 and STS-68 sat on Pads 39B and 39A respectively.

The hot fire of Auxiliary Power Unit 3 (APU 3) – a required process following its changeout during her post STS-123 processing flow – was also moved up from Saturday to later today.

Each orbiter has three APUs

– which produces pressure for the orbiter’s hydraulic system that controls the vehicle’s wing flaps, rudder, body flap and landing gear, among other elements of the vehicle. When an APU is changed out, the hot fire at the pad validates the unit for flight.

Call-to-stations is scheduled for 0800 this morning. APU hot fire will pick up on 2nd shift this evening, and the RSS will be rotated in to the mate position following the test,’ noted Friday processing information.

Atlantis is now waiting for her Hubble Servicing payload, following a delay due to a contamination issue. The payload is now set to arrive at the pad on Saturday evening, ahead of installation into Atlantis’ cargo bay next Tuesday.

‘S0600 Payload Operations: The contamination issues have been resolved and the payload is being prepared for delivery,’ added processing information on Friday.Â

‘Canister transport to Pad A is now scheduled for 1800L tomorrow evening and lift in to the PCR will follow.

‘Payload installation in to the orbiter is planned for Tuesday. RSS retract is scheduled for early tomorrow morning in support of the payload delivery.’

L2 Members: Refer to TAG keywords ‘STS-125’ andÂ ‘STS-400’ for an extensive selection of related presentations and live processing information from the orbiter’s engineers, as L2’s 125/400 Special Section builds up into the FRR element of the flow.

Â major engineering work will take place, as the launch dateÂ for Ares I-X closes in.Currently, Ares I-X – a four segment first stage, with dummy Upper Stage – is due to launch on April 15, 2009. However, this date may slip a few weeks.

Required pad work ahead of Ares I-X’s launch will be the modification to the lightning mast that is currently at the height to protect a shuttle.

Given Ares I-X will stand over a 100 feet taller, a temporary structure – fabricated by local contractor SDB in Mimms, Florida – will be added on top of the Fixed Service Structure (FSS).

This will extend the height of the existing lightning mast to ensure protection for Ares I-X, while itÂ sat on 39B.

Once Ares I-X has launched, the mast extension will be dismantled – although this will depend on how well Ares I-X performs. Should the vehicle fail, another Ares I-X test flight will take place around a year later. 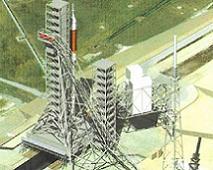 While ongoing construction of the three 600 feet tall Lightning Protection System towers continues throughout 2009 – designed to protect Ares I-Y and Ares I vehicles – the next major modification to the pad will focus on the huge engineering project of building the Rollercoaster EES (Emergency Egress System).

This was to be pre-empted by removal of the Rotating Service Structure (RSS) and Fixed Service Structure (FSS) used for shuttle, given they are not required for the Ares program. However, the tight Constellation budget has deferred their removal until around 2015.

The Rollercoaster itself will dominate the skyline, following design changes from the original plan -Â with a permanent, fixed structure out at Complex 39B.

L2 Members: Refer to TAG keywords ‘Constellation’,Â ‘Ares I-X’Â andÂ ‘EES’ for an extensive selection of related presentations (Large Sections on Ares I-X and the Rollercoaster – plus a pictorial diary of the lightning towers construction).

L2 Members: Refer to TAG keywords ‘Constellation’,Â ‘Ares I-X’Â andÂ ‘EES’ for an extensive selection of related presentations (Large Sections on Ares I-X and the Rollercoaster – plus a pictorial diary of the lightning towers construction).