These issues will make up the bulk of the upcoming Flight Readiness Reviews (FRR) – starting with the delayed Space Shuttle Program FRR next week, and the Agency FRR on September 22.

**ClickÂ here for sample of L2 menu and content****

Furthermore, the Safety Issues Briefing (SIB) goes on to note that the reason there are only two unique safety issues identified for STS-400 is because ‘LON is a contingency rescue operation for which there is no baselined risk. This SIB addresses impacts to existing risk documentation to the STS-125 mission only.’

While three specific issues have been identified for STS-125, only two (TPS and MMOD) are classed as an increased risk for mission success. ‘For each of these issues, appropriate mitigations have been developed by the technical community,’ notes the 48 page SIB presentation, available for download on L2.

For the limitations of on-orbit TPS inspections, Boeing identified the lack of R-bar Pitch Maneuver (RPM) photography as a prime contributor to the increased risk for Atlantis’ mission.

With the lack of RPM photos, which are taken from the ISS, Boeing has identified three potential risks including loss of analytical resolution necessary to accurately determine protrusion heights or cavity dimensions on the underbelly of Atlantis, the potential for insufficient time to survey all TPS locations, and the loss of the ET door closure verification modification.

For the loss of analytical resolution, the SIB notes that ‘lack of definitive protrusion height and/or cavity dimension inputs to analytical tools may affect ability of Damage Assessment Team (DAT) assessments to clear damage sites for entry.’

Furthermore, the inability to precisely determine the height of a gap filler protrusion or the dimension of a cavity could lead to a reduced ability to accurately predict the downstream heating environment during reentry. 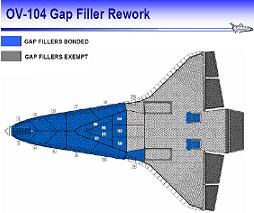 As gap fillers are the primary source of protrusion on the underbelly TPS, NASA managers have taken steps to mitigate the number of gap filler protrusions on STS-125 by bonding all the gap fillers on the forward half of Atlantis, as well as those around the ET doors, to their surrounding TPS tiles.

The reason for selecting the gap fillers on the forward part of the vehicle for this modification is due mainly because small protrusions toward the front of the vehicle are potentially more critical due to their possible disturbance of the plasma flow environment downstream.

In addition, RPM photographs have been used to verify the complete closure of the two ET umbilical doors on the underside of the Orbiters since STS-121 in July 2006.

The doors, which close over the propellant feedlines and umbilicals between the Orbiter and External Tank after ET separation, have been modified in the post Return to Flight era with a yellow paint strip to allow DAT members to verify that both doors are closed and sealed properly.

To help mitigate the loss of RPM imagery, a two hour scan of Atlantis’ underbelly with the Orbiter Boom Sensor System (OBSS) – with a dedicated inspection of both ET doors – has been added to the STS-125 timeline on Flight Day 2 (FD-2).

‘Vast majority of Orbiter survey will have damage detection down to 1.5 inch that represents the smallest On Orbit Inspection Criteria. Only the starboard elevons will be limited to 2 inch resolution.’

Furthermore, while a good majority of the Orbiter’s underbelly will be scanned on FD-2, the base heat shield around the main engines as well as the upper surface of the body flap will not be surveyed.

**L2 Trailer Video, with examples of L2 contentÂ – TRAILER NOW AVAILABLE – CLICK IMAGE**Alternatively **CLICK HERE** For the free trailer for the 1,900mb L2 video of an exclusive tour of the VAB, OPF and Pad.

The SIB presentation notes that ‘previous thermal assessments indicate the descent heating environment for (the base heat shield and body flap) is much less aggressive than ascent.’

These assessments give Boeing and NASA engineers confidence that there is a ‘high likelihood that Orbiter substructure that withstood heating due to ascent damage would survive the descent environment.’

In addition to the underbelly survey on FD-2, Atlantis’ crew will use the End Effector (EE) camera on the Shuttle Remote Manipulator System (SRMS) to survey the crew cabin for potential damage after post-insertion operations on FD-1.

Therefore, with the exception of the upper surfaces of the body flap and base heat shield (which are out of range of the OBSS’ capability), Atlantis’ entire TPS will be surveyed by the time the shuttle grapples the Hubble Space Telescope.

As always, a Focused Inspection of any damage site will be available to the flight crew on FD-5.

Given that the Hubble Space Telescope flies at a higher altitude than the ISS, Atlantis will be exposed to a higher risk for MMOD strikes during her STS-125 flight. Also, because of the lack of ISS shadowing, more of Atlantis’ flight surfaces will be vulnerable to MMOD impacts.

‘Higher vehicle altitudes and increased exposure to the MMOD flux vector may result in additional hypervelocity impacts to the Orbiter,’ notes the Boeing presentation. ‘Critical vehicle hardware such as windows and RCC components have very restrictive failure thresholds.’ 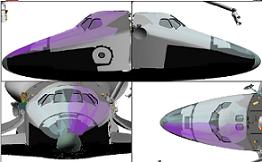 To emphasize the severity of this MMOD risk, a trade off study for the OBSS late inspections of Atlantis’ RCC panels and nose cap was performed by Boeing. The results of the study showed a marked decrease in the percentage chance of a Loss Of Crew and Vehicle situation with the late inspection surveys in place.

These ranges were compiled based on a constant orbit of 304 nautical miles as well as an orbit adjustment in the post undock timeline to 305x160nmi.

However, even with the risk mitigation of the late inspection, the percentage chance of a Loss Of Crew and Vehicle situation is still higher than the 1/200 limit set by the Space Shuttle Program. As a result, the Orbiter Project Office will have to process a waiver for this criteria before Atlantis launches.

For these reasons, several mitigation efforts have been built into the STS-125 mission profile.

These efforts include close monitoring of all trackable debris, OBSS late inspection of all RCC components for potential catastrophic damage, Wing Leading Edge Sensor System monitoring during on-orbit operations (limited by battery life), flying in an RCC protection attitude, and an orbital altitude adjustment in the post undock timeline.

In addition, the U.S. Space Command will run a pre-launch Computation of Misses Between Orbits (COMBO) analysis of any hazardous orbital debris that might require the performance of a Collision Avoidance Maneuver within the first two hours of Atlantis’ mission.

Furthermore, the STS-125 mission profile will see Atlantis fly in an RCC protection attitude. ‘The Orbiter preferred attitude of -ZLV will be maintained throughout the on orbit mission phase,’ notes the SIB presentation. ‘This attitude minimizes the risk of MMOD impact to vehicle RCC.’

Finally, a change to Atlantis’ orbit will be performed in the post undock timeline as a final measure to reduce the MMOD risk.

‘Post-HST release, the orbit altitude may be adjusted to reduce the Orbiter’s exposure to MMOD risk,’ notes the SIB presentation. ‘Maneuver will be performed only after the Orbiter has been cleared for reentry.’

The final unique risk associated with STS-125 is the now well known lack of rendezvous capability with the ISS and associated STS-400 rescue mission. With this risk in mind, and the potential for an on orbit TPS repair during STS-125, Atlantis will fly with complete TPS repair capability.

However, repair options can only be assessed once TPS inspections are performed by the SRMS and OBSS. For this reason, NASA has put together a contingency plan in case the OBSS fails to unstow or the SRMS fails to operate properly.

If the OBSS fails to unstow, the SRMS EE camera will be used to perform the nominal TPS inspections. EVA digital camera via the SRMS will be employed in case of an EE failure,’ notes the SIB presentation.

Furthermore, if the SRMS fails, an EVA with a SAFER unit might be considered to gather the necessary TPS data. 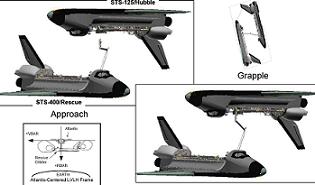 Nonetheless, the possibility remains that Atlantis could be damaged severely enough to warrant the STS-400 rescue mission.

In this event, NASA will have the capability to launch Endeavour within seven days of Atlantis’ launch should a contingency be declared.

‘Dual pad launch operations will provide the ability to launch the rescue mission no later than 7 days after the STS-125 launch,’ notes the SIB. Dual pad operations are scheduled to begin on September 18 when Endeavour rolls out to Pad B.

Unlike ISS flights where a LON mission can be called up 50-70 days after the previous mission’s launch, Contingency Shuttle Crew Support (CSCS) for STS-125 is dependant upon Atlantis’ onboard fuel and food consumables.

As such, the Kennedy Space Center launch team will continue to actively countdown toward the launch of Endeavour until the Mission Management Team (MMT) orders them to stand down.

Nonetheless, should STS-400 be needed, Endeavour and her four member crew will carry an additional Extra-vehicular Mobility Unit (EMU) as well as all the necessary limited life TPS repair items such as STA-54 and NOAX tubes to orbit.

If the rescue mission is flown, the additional EMU on STS-400, as well as the four EMUs manifested on STS-125, will be used to facilitate crew transfer from the disabled Atlantis to the healthy Endeavour.