NASASpaceflight.com is covering the launch as a live event, with background, live updates, images and a free launch video all available on the links below (read more).

**Click here for the Proton-M/Nimiq 4 launch video** – available NOW…
(Video section is FREE, but you need to sign up as a member of the forum to enter the video section of the site. We only use your e-mail to send you your password. It will not be used for spam etc.)

The first three stages of the Proton will use a standard ascent trajectory to place the Breeze-M fourth stage and the Nimiq 4 satellite into a suborbital trajectory from which the Breeze M Upper Stage will then place itself and the spacecraft into a low Earth circular parking orbit.

Once Nimiq 4 is in the parking orbit, it will be injected into a geosynchronous transfer orbit following four additional burns of the Breeze M.

The Breeze M is powered by one pump fed gimbaled main engine that develops thrust of 19.6 kN (4,400 lbf). The Breeze-M is composed of a central core and a jettisonable additional propellant tank. Inert mass of the stage at lift-off is approximately 2,370 kg (5,225 lb).

The quantity of propellant carried is dependent on specific mission requirements and is varied to maximize mission performance. The Breeze M is controlled by a closed loop, triple-redundant guidance system. 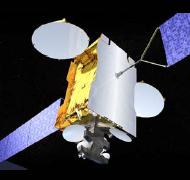 The second payload has six beams covering Canada for such advanced services as high-definition television. Nimiq satellites are dedicated to the provision of direct-to-home services for Bell TV.

Nimiq 4 is a commercial communications satellite built by EADS Astrium. The main payload has 32 Ku-band channels providing specialty television and foreign language programming. The satellite will be located at 82 degrees West longitude.

Nimiq 4 is based on the Eurostar-3000S version of the highly successful Eurostar communications satellite. It will have a launch mass of 4.8 tonnes, a solar array span of 39 meters once deployed in orbit, and spacecraft power of 12 kW at end of life.

The double-floor E3000 model is equipped with an all-chemical propulsion system and Lithium-Ion batteries. The satellite, operating in geostationary orbit, will provide commercial services for a minimum of 15 years.

Re-live the launch updates on the live event pages, linked above.

Endeavour/STS-400 arrives at Pad 39B – both sisters visible