With the need for on-orbit Thermal Protection System (TPS) repair maturity required for the one mission without the safe haven of the International Space Station (ISS), Atlantis will be flying with several options that could enable the astronauts to effect a repair during flight.Ahead of STS-125, engineers have analyzed the safety of crack repairs to the Reinforced Carbon-Carbon (RCC) protection system, via a special material called Non-Oxide Adhesive eXperimental, Rev-D (NOAX-D).

Five repair techniques have been implemented by the Space Shuttle Program, via NOAX-D is a two-year old method that currently flies on every mission. The objective of an Orbiter Project Office (OPO) review was to examine the ability of NOAX repairs to protect the orbiter through reentry.

The Crack Repair Material (CRM) is a paste-like polymer loaded with solids, which can repair damage in any part of the RCC including the wing leading edge and the nose cap areas.

The working time varies depending on thermal conditions, and it will harden in orbit from a combination of curing in place and evaporation of the liquid content. Heating in the absence of oxygen (pyrolysis) during reentry converts the NOAX into a ceramic/glass state, and some of the surface does recede – but the damage site remains covered. 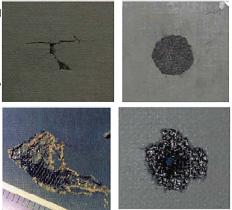 The ability to successfully perform a repair depends on several factors: ‘Protuberance (height of the repair above the Outer Mold Line of the RCC. Technique (following the developed procedures is critical to repair outcome). Adequate Cure (the longer the repair sets, the stronger the material becomes),’ listed the expansive presentation.

‘Damage Size (testing shows that repair of spalls over 2â€ may result in reduced performance). Mud Cracks (discontinuities in the surface may help flaking during reentry). Porosity (bubbles in repair from outgassing may create a path for hot gases to flow). Contamination (impurities can get into NOAX from material processing or RCC surfaces).’

Arc jet testing shows that there is no difference in repairs on flown versus new RCC material. The NOAX should be applied at temperatures between 40F and 140F, with the preferred range from 70F to 110F.

The repair should cure from twelve hours to two days at a minimum (which is expected given the timing of repairs after late inspection) to a maximum of eight days. Reentry temperatures from 2000F – 2900F have been tested for 1200 seconds.

NOAX has been tested as 15-day old material (the expected earliest on-orbit usage based on preflight logistics) to 34+ days (its current shelf life.) Multiple crews performed the repairs that went into arc-jet testing to see what any differences in techniques would have. Limits for protuberance over the OML were set at an average of 1/10” with a maximum of 0.15”.

Porosity limits were not established, but the presence of large pores will be one of the inspection criteria. Limits on the mud-crack size were not made either, but are in development to determine if meaningful criteria can be set.

Contamination was simulated by brushing a salt solution onto the RCC before damage was induced, and curved samples from a unflown RCC were repaired.

Both random and vibration tests were performed pre-and post-arc jet. The extreme thermal conditions the any repairs would be subjected to included 40F-170F temperatures for the post-repair glove box, and 100F-245F in the thermal chamber.

The following have samples prepared but have not been through arc-jet testing: repaired site surface temperature (while on-orbit), entry random vibrations (from entry interface to 1200 seconds), maximum vibrations (from 1200 second mark to wheels stop), salt contamination/exposure, and applied on-orbit lifetime.

The classification of hazard causes brought up four primary risks:

1) Material is inadequate for use inside the limits of certification function:

If the material doesn’t protect the RCC for the sizes, types and locations of damage listed in the Materials Requirements Document (MRD), then the potential exists for loss of crew and vehicle. Samples were prepared for testing against the MRD crack requirement, for spalled coating repair, RCC gouges, and small hole repair.

For spalls and gouges less than 2 inches in diameter, 7 of 8 samples passed (including 2 from the STS-121 DTO. All 13 of the realistic (less than four inch long) cracks passed, as well as the four simulated slotted damage samples.

Seven of eight small (1/8 – 3/8” diameter) holes passed as well, and all of these damage types have the test data to support confidence in an on-orbit repair.

However, the data does not support the capability to repair impacted offset cracks (as 2 of 3 passed the test) and larger spalls or gouges with a diameter of 2-4 inches, as only 1 of 4 made it through.

If the CRM is applied incorrectly, due to lack of crew training, difficulty in working with NOAX, or the thermal environment unknowns, it could lead to further damage to the repair site or surrounding area. Crew members are not trained with the actual CRM, but using three different stimulants to represent the three different working stages of the NOAX.

Actual application was flight-tested during the STS-121 DTO, and those procedures were used to develop the arc-jet samples in a glove box with crew members.

Application of the NOAX is very thermally dependent, and EVA procedures list the preferred temperatures. Analysis conducted prior to the EVA will determine expected temperatures and keep them within limits during the repair.

It is possible (but unlikely) that the scraper blade temperature will get too hot, and that would make the material harder and more difficult to work with. The crew is trained to recognize that condition, and would scrape the material out of the repair and start over.

The three part process has the wetting layer applied at 100F-140F, which promotes good adhesion of the material to the carbon-carbon substrate. The bulk layer of the material can be applied from 40F-140F. That is also the thermal range for the finishing layer – to smooth the surface and fill any voids.

The Crack Repair Bag and two RCC palettes – used to transfer materials and tools – provide thermal protection for the material. NOAX may outgas, or bubble, at vacuum which increases the protuberance height.

NOAX is degassed by applying it to an undamaged area of the wing (downstream of the repair) and working it with the scraper until the bubbling decreases. It is then applied in layers to the damage area to ensure any porosities do not extend deep within the repair.

Seaming tests have shown that sections of damaged RCC can be repaired at different times and still produce one cohesive fix. Seven-inch cracks were fixed using 30 minute intervals, and passed arc jet testing after 48-hour curing.

NOAX repairs can be reworked by scraping material away from damage and reapplying, tested on three samples which all passed.

3) Inadequate cure of the material:

If the material doesn’t develop sufficient hardness, it could shed and expose the substrate from aero-thermal loads during reentry. Time and temperatures will be based on ground predictions, and used to determine the adequacy of NOAX curing after the application.

There is no upper temperature limit, as the material cures more quickly at higher temperatures. A cure model has been developed and used to predict the state of the cure from the thermal cycling of orbital mechanics and orbiter orientation. Ultraviolet (UV) ray exposure and Atomic Oxygen (AO) exposure have no effect on the NOAX oxidation rates.

Any NOAX shedding or flaking during reentry could cause a protuberance that may overheat undamaged areas downstream. One of the test samples had a forward-facing step that resulted in burn-through of the RCC away from the repair area.

Fortunately the chances of any forward-facing step surviving the worst part of reentry are highly unlikely. The best bet is that the step would correct itself by flaking off before any damage would occur to surrounding areas.

Some worst-case samples have been created but not tested yet, and samples that exceeded the .150” protuberance limit did not induce any failures away from the repair area.

The summary concluded that the repair materials, tools, and techniques were successfully demonstrated during the STS-121 DTO. Samples were repaired on orbit and tested in the arc-jet.

Rollout complete for Atlantis/STS-125 – arrives at repaired 39A