Lockheed Martin’s design efforts on the Orion vehicle are being hindered by Ares I driven requirements, documented notes claim, with concerns ranging from the constant design changes, to Thrust Oscillation (TO) mitigation requirements.

With Crew Seat Isolation efforts deferred until next year – in order not to delay the recent Ares I PDR (Preliminary Design Review) – Orion documentation calls for the Ares I Project to stop adversely affecting Orion’s design, with its own PDR delayed well into 2009. 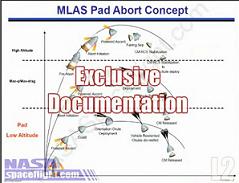 While the public face of the Constellation Program (CxP) continues to be driven via overly-positive statements on the current state of progress, the reality of their own documentation points to Ares I causing turmoil in Orion’s development over these opening years of the design phase.

Design issues for any new vehicle are to be expected, and correctly represented by the often-used comment of ‘if there weren’t problems, we wouldn’t need engineers.’ However, Orion’s short life on the drawing board has been an unhappy childhood.

The vast majority of Orion’s design changes have been driven by Ares I’s shortcomings – via performance and mass issues – to ably inject the vehicle into orbit. The fact that the Ares I now has several thousand pounds of reserve mass properties negates the suffering it has brought on the vehicle it is designed to serve.

Those penalties Orion had to endure could be seen at the very start of its design process, when the Crew Exploration Vehicle (CEV) reduced in size by 0.5 meters in diameter, soon followed by Orion having its Service Module stripped down in size and mass by around 50 percent.

‘Mass savings’ would become one of the most repeated terms surrounding the Orion project.

In July, 2007, NASA sent another set of requirements to Orion’s contractor Lockheed Martin, culling the amount of propellant the vehicle would carry on International Space Station (ISS) missions, in order to bring its weight down. 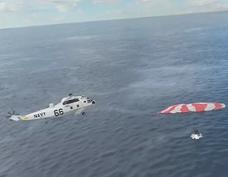 A month later, the fallout on Orion continued with the decision to move to water landings, due to the requirement to lose yet more mass from the vehicle – this time the airbag landing system – a move first denied, but now confirmed as implemented.

Efforts to return to land landings are continuing, but only via a reduced airbag system that has smaller mass penalties. Design challenges are also highlighted via the alternative option, and water landings remain baselined.

October, 2007, saw one ‘final’ major push to deal with mass savings on Orion, to such an extent Ares I would eventually gained several thousand pounds of reserve mass – something which is now often mentioned in press materials as a sign of how well Ares I development is progressing, without mentioning Orion’s sacrifices.

This latest mass saving process was known as the Zero Base Vehicle (ZBV) effort, as the focus switched to the Lunar version of Orion. During the ZBV process, the vehicle underwent a ‘scrubbing’ to a minimum weight, ahead of the reapplication of some of the deleted capability.

Already some issues between the Constellation related departments were starting to show, with an All Hands meeting notes referencing the need for ‘teamwork and chemistry’ as the way forward through the design efforts.

‘Failure is an option during development,’ Ares program leader Steve Cook noted at the program-wide All Hands meeting. ‘We are willing to take calculated risks to further our knowledge.’

‘The CEV Project faces some very real challenges and difficult decisions will need to be made,’ Constellation Program’s Bob Armstrong warned, as the vehicle came out of its System Definition Review (SDR) Board meeting, with the most significant issue classed as controlling spacecraft weight to match Ares I performance.

A separate effort – now under a special ‘management’ budget – is continuing on the MLAS (Max Launch Abort System), although this is now known to be based around a Human Rated Ares V back-up option, with MLAS being the only LAS system that would fit inside the Vehicle Assembly Building (VAB) due to the height of Ares V.

The result of the ZBV process then moved into the ‘buy back’ phase, where some of the lost capability – based on critical requirements – was added back on to Orion. This was carried out by the Orion Vehicle Engineering Integration Working Group (OVEIWG).

Ares I didn’t leave all of the mass and performance problems on Orion’s doorstep, with trade studies initiated on a larger nozzle ratio to increase performance – now confirmed for the Lunar missions – added to evaluations into the potential expendability of the first stage, classed as potentially resulting in a 3,000lbs mass saving.

2008 opened with a motivational speech from legendary Flight Director Gene Kranz, sent in a heavily produced video to the Constellation workforce.

‘Our learning curve, as we went through Mercury, Gemini and Apollo was very steep. With Mercury we learned of leaders and leadership – leaders must have integrity, they are up front, they challenge the team to accomplish their mission,’ Kranz noted.

‘We also learned a lot about ourselves with Mercury, as a lot of us came in from aircraft testing, with egos as big as the room we worked in. We had to learn to leave our egos at the door and become a team, so we became one.’

Two major problems would cause headaches within CxP soon after, relating to budget shortfalls for the Constellation Program, and the realization that Thrust Oscillation on the Ares I First Stage required a major mitigation effort – in order to ensure the safety of the crew riding in Orion.

The shortfall in funding eventually led to the decision to delay a number of key launch milestones by up to a year, with Constellation manager Jeff Hanley pre-empting the official announcement with a note of confidence that the gap between shuttle and Orion would not breach five years – citing Orion 2’s first manned launch in March 2015, even though the first ISS crew rotation would not happen until a year later on Orion 4.

The funding shortfall also has major impacts on the Upper Stage test schedule, with numerous elements of ‘required’ testing now gutted out of the schedule. Some major test requirements have now been deferred to when the hardware first flies on Ares I-Y, which is deemed by sources as ‘increased program success risk’. (article will follow this month, documentation on L2).
Thrust Oscillation and an unhappy Orion:

Thrust Oscillation is created by solid rocket motors, its mitigation process has evolved, via many options, and the engineers have a plan. However, like a Battlestar Galactica plot twist, all is not as straightforward as per recent comments on the post Ares I PDR media briefing.

Had NASA taken the recommended plan to counter TO, Ares I’s PDR would have been delayed – as confirmed in Lockheed Martin documentation on L2, which claims the requirement of Crew Seat Isolation hardware will reappear via a ‘Change Request’ (CR) in 2009.

Lockheed Martin (Orion) disagreed with NASA’s recommendation, asking NASA to instead move forward without affecting Orionâ€™s’ design process, given the Crew Seat Isolation design was too immature to be added to the vehicle in time for the PDR’s review of TO.

‘NASA recommends that Program pursue Option 2, but with full knowledge of Orion impacts,’ the documentation notes. ‘Lockheed Martin’s recommendation is to have Ares pursue Ares Thrust Oscillation Mitigation solutions within the Ares Project and not adversely effect Orion’s design.

While Constellation managers initially claimed that the third mitigation option of Crew Seat Isolation – added to the ‘shock absorbers’ on the aft skirt, and the Isolation plane (dampers) in the interstage – wasn’t required, the latest media briefing back-tracked slightly, claiming it is still being worked on as a back-up option.

However, the documentation shows that Orion’s mitigation option has simply been deferred, in order to avoid causing a delay to the recent Ares I PDR. It will then return to the table in time for the Delta PDR on Thrust Oscillation in 2009, which by then the Crew Seat Isolation option will have matured enough to be viable as a mitigation option.

‘NASA CxP leverages Thrust Oscillation requirements on Orion design, which would result in the following options. Orion accepts the CR (Change Request) resulting in a delay to PDR (eliminates confusion on baseline design and TO assessment studies),’ added Orion documentation.

‘SELECTED: Orion proceeds forward with current design to PDR and then a CR is put in place, and a Delta PDR is scheduled to address the TO changes (delays TO work until FY09).’ The Delta PDR has been confirmed for the middle of 2009. 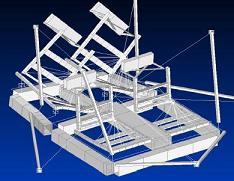 As to the design of the Crew Seat Isolation hardware, three possible approaches are open to engineers: ‘Isolation of individual seats (via springs or flexures). Isolation of entire seat pallet. ‘Clean Sheet’ Active CIAS Pallet Isolation design. Isolation system mass about 200 lb for both passive approaches and upwards of 500 lbs for an active system.’

Thanks to the vast array of mass shedding activities noted in the first half of this article, such a mass hit can be easily swallowed by the integrated Ares/Orion vehicle. However, Lockheed Martin are unhappy with the constant changes to the requirements and the design of Orion that result from such activities.

That frustration has come out via a reaction to an apparent ‘concern’ NASA has with the quality of Lockheed Martin’s latest filed version of Orion (606C).

‘NASA has expressed concerns with 606C model and quality,’ the documentation noted. ‘Community must understand that there has not been two consecutive deliveries with the same baseline design, because (of) multiple configuration changes (prior to PDR on a non-consistent design).’

This may also be responsible for the delay in Orion’s own PDR, which was due in November. Managers have since confirmed that the PDR has been delayed – though sources not the delay could be as wide-reaching as between six months and even a year.

The primary reason is understood to be the requirement of an additional DAC (Design Analysis Cycle).

L2 Members: Refer to TAG keywords ‘Ares I’ ‘Orion’ and ‘TO’ for updates and expansive presentations. All quotes in the article above are from L2 content.

Selection of L2 Resources For Ares I, V and Constellation (some not listed):

NASA’s dream scenario of a 13 flight extension for shuttle