An imagery survey has found the S1 radiator on the International Space Station (ISS) has been damaged, with one of the face sheets observed to have “peeled back” from the structure.

Meanwhile, the investigation into the ballistic re-entry of Soyuz TMA-11 – which is centered around the problematic pyrotechnic bolts that separate the crew Descent Module from the Service Module – has found that long-term exposure to electromagnetic emissions on-orbit may be responsible. 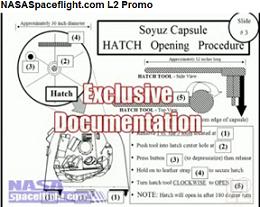 Each of the eight radiator panels has two thermal face sheets, one on each side, which are epoxy-glued and autoclaved to the honeycomb structure of the radiator. The face sheets have a thermal surface coating designed to maximize heat reflection and absorption transfer to space.

While the cause of the damageÂ has not yet confirmed, the survey was called after Russian spacewalkers reported one of the Service Module thruster covers had impacted the S1 radiator, after it was jettisoned during a recent spacewalk. 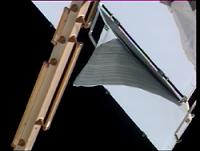 The area of aluminum that has peeled back measures around 80cm x 30cm, and while the damage has not affected the heat rejection capability of the radiator, evaluations are taking place into its potential threat of liberating completely – thus become a debris hazard.

The evaluations will also check into the potential that the face sheet debonded on its own accord – which would lead to concerns of other face sheets also peeling away.

‘Radiator Anomaly: During RS EVA 20A, the EVA crew members jettisoned a SM thruster cover and reported it impacted the Starboard (S1) radiator,’ noted Monday’s 8th Floor News. ‘Because of this, an imagery survey of the radiator was requested.

‘This survey revealed that a face sheet had peeled back on one panel of the S1 radiator. Though the impact of the thruster cover was what drove the survey, there is no evidence the impact of the cover caused the damage to the radiator.

‘The thermal team reported there is no significant change to the heat rejection capability, so currently there are no changes to operations planned. The teams will continue to assess the situation to determine whether any further actions are required.’

EVA 20A was a special Russian spacewalk which was conducted by Sergei Volkov and Oleg Kononenko. Their task was to remove one of 10 pyrotechnic bolts from the docked Soyuz TMA-12, and place it in the blast-proof canister.

This bolt is being used as part of an investigation into the off-nominal ballistic re-entry of Soyuz TMA-11 – the second problematic return to Earth in succession for the Russian vehicleÂ – caused by a problem with the expected separation between the crew descentÂ and service modules during re-entry.

Early findings are pointing towards the issue being related to long-term exposure of the vehicle’sÂ hardwareÂ on orbit, and the associated electromagnetic emissions.

Such findings – if confirmed -Â may also work against plans to extend the Soyuz on-orbit docked time whilst at the Station.

‘Soyuz commissions (one independent and one internal to Energia) were discussed at SORR (Stage Operations Readiness Review),’ noted a memo to senior managers. ‘According to the Russian report, the most likely cause of pyro bolt issue was long-term exposure to the space environment and electromagnetic emissions.

There has been a large amount of activity on the ISS recently, with the recently departed Progress 29/M-64 cargo ship conducting its farewell deorbit burn at 20:47 UTC on Monday night, following its undocking from the Station last week.

However, it was Hurricane Gustav’s recent threat to the Houston area that highlighted preparations for the vehicle departure.

‘The 29P Progress was scheduled to undock on Monday, Sept 1. However, due to hurricane Gustav, there was some concern that we would have to postpone the undock which would have a cascading ripple effect on other future scheduled activities,’ added associated notes.

‘If the US flight control team is supporting (other activities), there is insufficient personnel to execute all the key integrated USOS (US Segment) functions for the undock sequence to take place safely. However, since Gustav basically missed Houston, we were able to proceed with an uneventful undock as planned.’

Taking its place on the ISS, Progress 30/M-65 is scheduled to launch from the Baikonur Cosmodrome in Kazakhstan on Wednesday, carrying two tons of food, fuel and supplies to the waiting Expedition 17 crew.

Another visitor, the ATV (Automated Transfer Vehicle),Â recently departed from the Station last Friday, following a successful debut trip to the ISS. The European cargo ship will spend another month in orbit, prior to its destructive re-entry.

‘ATV Undock: The crew invested a good deal of time this week preparing the ESA ATV for undock,’ added the 8th Floor News. ‘As you know, this was the first visit of the European cargo vehicle that delivered a great deal of useful cargo, and was also utilized as the primary means for performing reboost and debris avoidance maneuvers.

‘The ATV successfully undocked on Friday. For this first undock and re-entry, the ESA teams are interested in observing details of the entry. They determined that the optimum environment for these observations is during darkness.

‘Therefore, post undock, the ATV will loiter on orbit until later this month to ensure that the re-entry trajectory will be at night.’

The ISS has also carried out a DAM (Debris Avoidance Maneuver) recently, due to the threat of debris from the remains of the Kosmos 2421 satellite.

The threat of orbital debris is obvious, with one rogue piece of Kosmos 2421 making a close pass to the ISS last night – which was spotted past the point the Station could carry out another DAM.

‘When a conjunction prediction last night (8:00pm EDT) for a piece of Kosmos 2421 debris showed a miss distance of 0.67 km at a TCA (Time of Closest Approach) of 10:00am this morning, leaving insufficient time for calculatingÂ and executing a DAM with SM propulsion, Safe Haven instructions were uplinked to the crew.

‘Subsequent tracking data reduced the PC (Probability of Collision) drastically, and when it approached zero this morning, ‘Safe Haven’ was called off.’

Safe Haven on the ISS would have involved the Expedition 17 crewmembers retreating to the Soyuz crew return vehicle, after closing hatches between the modules on the Station.