Rollout complete for Atlantis/STS-125 – arrives at repaired 39A

STS-125 moved another step closer to launch, following Atlantis’ arrival at Pad 39A – a pad that has undergone extensive repairs over the past couple of months.

Following the flame trench wall collapse during STS-124’s launch, engineers have completed repairs to both walls, and certified the pad via flight rationale to host STS-125’s launch – which has been changed to NET (No Earlier Than) October 10, at 12:23am.

Atlantis received the green light to leave the Vehicle Assembly Building (VAB) following a 7am meeting to discuss the threats of two major storms that have the potential of passing close by the Kennedy Space Center (KSC). First motion was timed at 9:19 am local time.

Tropical Storm Hanna is currently forecast to pass well clear of the space coast, though there is some uncertainty regarding Hurricane Ike – which is racing towards the eastern seaboard.

Only a few issues are being listed with Atlantis – all minor – as she undergoes Launch Pad Validation (S0009) operations at 39A.

‘(LO2 Helium Pre-Press QD leak) update: PD9 QD R&R is complete; leak check will be worked at the Pad,’ noted Thursday morning processing information. ‘(LH2 Recirc Pump 3 showed an ON command and the command is actually OFF) update: Replaced a card and is awaiting vehicle power up for retest.’

No issues are being reported with Atlantis, or Endeavour – as the Launch On Need (LON) STS-400 contingency shuttle – that threaten using up any of the remaining contingency days in the flow.

The launch date was likely to slip by a few days, which has now become official, with October 10 now the new target for STS-125’s lift-off.

These bricks were scattered from the flame trench out to beyond the pad perimeter fence. Some were also seen rising from the pad into the air via an Infrared Imaging camera – although none of the debris threatened the vehicle.

Historical records were complied to show that debris from the flame trench is not a new event – with no debris hitting the vehicle reported on any of the associated launches.

‘STS-104 flame deflector sides missing acreage 3â€™x3â€™x2â€ East & 2â€™x6â€x6â€ West. STS-99 reported note: debris emanating from the flame trenches, such as brick and mortar, are commonly transported by the exhaust plumes to outlying acreage areas of the pad without incident to the vehicle.

The root cause of the refractory brick liberation was determined to be operational degradation with no service life for the trench wall system established.

‘The lack of established service life is in part due to inadequate or non-existent definition of Shuttle flame trench design requirements for the flame trench wall and no requirements having been defined for the maintenance of the wall for Saturn or Shuttle,’ noted a closure document on the event.

The flame trench walls underwent repairs to protect the underlying pad concrete structure from the plume environment and to preclude large losses of refractory bricks or Fondu Fyre.

These repairs included replacing the area where refractory brick was lost on STS-124, with Fondu Fyre and securing control joints that fail tap tests with anchor plates. 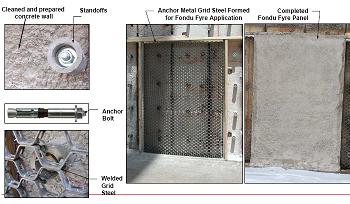 ‘Anchored and reinforced steel grid imbedded within 6” deep refractory cement. 5′ x 6’ panels formed and poured with interlocking tongue and groove keyway to mitigate hot gas intrusion. 16 anchors/stand-offs per panel (18” on centers) for structural integrity to the back wall.

’14-gauge steel mesh welded to standoffs and anchor assemblies utilized within the refractory to minimize flexure.

‘The Pad 39A flame trench repair has been completed such that large losses of refractory bricks or Fondu Fyre will be precluded and hence remain classified as unexpected debris above the MLP (Mobile Launch Platform) deck.’

The repairs to the flame trench walls were completed in good time ahead of Atlantis’ original rollout date last month – and subsequently certified by the shuttle program as acceptable to host STS-125’s launch.

‘Based on observations during demolition the addition of the steel anchors and plates reduce the risk of brick liberation along suspect control joint areas. Based on the new design and repairs KSC believes that liberation of additional brick is ‘unlikely’ as defined per SSP Risk Matrix.’

Also backing up the safety element of the repaired pad will be several new sensors – embedded into the flame trench – to record data of the environments in the trench during launch. More sensors will be added ahead of STS-119 early next year.

Additional infrared cameras will also be added – including ‘cooled’ cameras that will be able to catch any liberations for longer, without suffering ‘white out’ shortly after the Solid Rocket Boosters (SRBs) ignite.

An article will follow in the coming days outlining these additions.