STS-125’s rollout to Pad 39A was unlikely to occur before the weekend, due to the threat of Hurricane Hanna to Florida’s space coast. However, a Wednesday Ops meeting has decided to attempt rollout at 10am on Thursday.

Meanwhile, the build up to STS-129 is taking place, with the crew assigned ahead of training. The late 2009 logistics mission will be carried out by Discovery.

Atlantis and her STS-125 stack are ready to rollout to the pad, with no engineering issues being worked on the shuttle. However, the threat of Hanna bringing strong winds to KSC continues to delay her trip down the crawlerway.

As a result, KSC has now moved into Level 4 – or ‘HURCON IV’ – preparations, laid out in documentation that is designed to protect the vehicles and hardware in the event of high winds hitting the facility.

As the threat of the storm continues, KSC facilities move into advanced stages of preparations by the day, with KSC set to move to ‘HURCON III’ on Wednesday.

‘HURCON III: 48 hours prior to forecasted arrival of 50 kt/58 mph sustained winds. Non-essential personnel may be relieved from normal duties to assist with hurricane preps as required Rideout crew rosters are finalized. These personnel will be released and must return at the declaration of HURCON II.’

Hanna is currently weakening, ahead of its expected transit towards the space coast – with forecasts predicting it will be a Cat 1 Hurricane when it passes to the east of the Cape. Should its path and/or strength change significantly, managers will reassess the rollout situation.

Currently, STS-125 has two factors in play, the rollout schedule and the payload to the pad schedule – with the latter causing shuttle manager John Shannon to note that the ‘likely’ launch date at present is October 11.

Based solely on a Saturday rollout to the pad, STS-125 would have one day of contingency remaining in the flow towards an October 8th launch date – which is currently the ‘official’ launch date. However, STS-125 – as previously reported – is likely to slip a few days.

Aiding operations, managers have shifted the scheduled operation of transferring the STS-125 payload to pad shifted to September 19. A solid launch date target is not likely to be forthcoming until next week.

UPDATE: Wednesday’s Ops Meeting has decided to attempt rollout of STS-125 at 10am on Thursday. More to follow shortly…

Currently manifested for October 15, 2009, STS-129/ULF-3 will be an important logistics run to the International Space Station (ISS), building up the supply of spare components that will be stored on the outside of the Station. 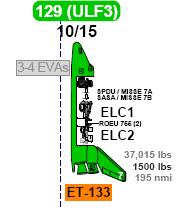 The 15-day mission has between three and four EVAs scheduled. Discovery’s payload will be dominated by two large External Logistics Carriers (ELC) carrying two spare gyroscopes. Also riding up in the payload will be two Nitrogen Tank Assemblies (NTA) – along with an ammonia tank assembly.

Included in the delivery will be a spare latching end effector for the SSRMS (Space Station Remote Manipulator System), two pump modules, a spare trailing umbilical system for the Mobile Transporter and a high-pressure gas tank.

Though not yet official, information on L2 notes Colonel Charles Hobaugh as commander of STS-129, for what will be his third shuttle flight. Col. Hobaugh had previously served as pilot on STS-104 in 2001 and STS-118 in 2007.

Discovery will also be returning Dr Robert Thirsk to Earth – following his arrival at the ISS on a Russian Soyuz for his role on Expedition 19.

Repaired MFR redelivered to KSC – Rollout delayed due to Hanna