Atlantis to rollback to VAB on October 20 – Hubble troubleshooting latest 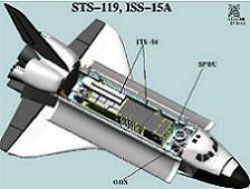 As NASA and the SSP (Space Shuttle Program) refine their orbiter schedules, preparations for STS-125’s rollback to the Vehicle Assembly Building (VAB) are proceeding – with confirmation that payload removal operations will begin this weekend.

October 20 has been pencilled in for Atlantis’ rollback from Pad 39A, which will clear the pad for hosting Endeavour.

Processing at the pad has ceased on the orbiter and her stack, which was heading into a series of closeouts for launch, until the mission was postponed to 2009.

“Program has approved removal of HST payload, that work is scheduled to begin this weekend. Orbiter aft closeouts and aft confidence tests remain on hold.”

Whether Atlantis will take up residence in the VAB over the new year, or be de-stacked and rolled back to her Orbiter Processing Facility (OPF), is also evaluation.

The STS-125 stack should be ok to stay inside the VAB for several months, although the giant building does not have the orbiter comforts of the Payload Changeout Room (PCR) at the pad, or the environmentally controlled conditions of the OPF.

Factors playing a role in the decision between staying in the VAB, or de-stacking, include some concerns surrounding the observation of moisture on the orbiter’s Payload Bay Doors (PLBDs). This situation would be best mitigated by sending Atlantis back to her OPF.

Structure engineers are evaluating if the PLBDs won’t suffer any worsening in their condition by remaining stacked to the External Tank (ET-127) inside the VAB for several months.

In order to aid available options, engineers are now likely to offload Atlantis’ OMS tanks of hypergolics before rollback to the VAB.

While this is not required for a stay in the VAB, it would be required ahead of a de-stack and rollover to the OPF. This is due to Atlantis currently holding 31,000 pounds of hypers onboard her OMS and RCS (Reaction Control Systems) tanks.

Hypergolics are extremely hazardous and explosive, with the deservicing of such a large amount of hypers from Atlantis in the OPF requiring a large area of the surrounding buildings to be evacuated. Staying in the VAB would allow for Atlantis to avoid such a deservicing effort.

This particular evaluation is the likely reason managers are taking their time in finalizing a rollback plan, and what is best for Atlantis during her wait for a new STS-125 launch date.

Troubleshooting with Hubble is continuing, as engineers carry out the complex task of switching the telescope over from the SIC&DH (Science Instrument Command and Data Handling) system Side A to its redundant Side B.

This system – which provides the primary data link for commands down to the instruments and data back to the spacecraft – performs a self-check through its various subsystems. That test failed at the weekend, resulting in the SIC&DH terminating its “heartbeat signal” that is monitored by the 486 main spacecraft computer.

Upon the loss of the signal from the SIC&DH, the 486 assumed that it was not reliably carrying out its role of monitoring the health of the science instruments, and took the protective measure of issuing a global command to put all of the instruments and the SIC&DH into a minimally operating safe condition (safe mode).

The SIC&DH has two equivalent sets of electronics that provide full redundancy of all capabilities, called Side A and Side B. Side A has been exclusively used since Hubble’s launch via Discovery in 1990. Side B has been kept in reserve and is now being readied for use.

The process of switching over to Side B is a major undertaking due to the vast suite of equipment involved. Due diligence in carrying out the switchover is paramount, with the effort currently on track for next week.

The engineers are also utilizing a failure review team to gain all of the information that is available from diagnostics checks, before leaving Side A.

Atlantis will now be tasked with replacing both SIC&DH Side A and Side B during her mission – currently expected in February of next year – with the replacement unit containing both new Sides A and B – as they are contained within the same assembly that will ride uphill during STS-125.

Current evaluations for the re-aligned STS-125 mission are focusing on the unit’s location in the Payload Bay (PLB), when it arrives at KSC in January.

“STS-125 launch preparations remain on hold for evaluations of the HST command and data handling LRU (Line Replacement Unit). The Hubble team is in the process of switching over control from the A side to the B side,” noted a status report. “The outcome of the switch-over will provide additional data in determining the plan going forward.

“There is a spare LRU available that is flight certified and this unit will be bench tested and delivered to the cape in early January. Assessments are underway on what payload bay carrier location is best to install this spare LRU for flight. Several options for rescheduling STS-125’s launch date continue to be evaluated.”

Currently favored – pending Hubble requirements – is for Atlantis to launch in what was previously STS-119’s launch window in February. This would see Discovery take up the LON (Launch On Need) role on Pad 39B as STS-401 – a change from STS-400 designation, which is specific to Endeavour as the LON vehicle.

Discovery herself would then move to Pad 39A to take up her primary STS-119 role, for a launch in March.

That current plan for the first two launches of 2009 – which is still not official due to continued evaluations with Hubble – will lead to a realignment of next year’s mission schedule, although what is near-certain is Endeavour’s STS-126 being the next launch out of the Kennedy Space Center (KSC), in a window that is expected to open on November 14.

Endeavour’s roll to Pad 39A – a mini-rollout from Pad 39B – was on track for two weeks time, though this will be slightly later, with Atlantis not departing the pad until October 20. These timelines are still open for changes.

“Current planning for STS-126, based on a delay of STS-125, shows a potential target launch date of NET November 14, taking into account the current status of crew training,” noted Thursday processing information. “Options for rolling STS-126 to Pad A and associated vehicle system configurations are under evaluation.

“S0024 scape operations at Pad B resume this morning. The plan is to perform propellant loading to support the STS-126 mission requirements instead of STS-400 because of the delay of STS-125.”

Thankfully no issues are being worked with Endeavour, as she prepares to change call signs from STS-400 to STS-126. A small issue with ET-129’s LOX tank pressure was found to be the result of an open valve, with the IPR (Interim Problem Report) likely to be closed later this week.

“OMRSD (Operations Maintenance Requirements Specifications Document) indicates the tank can go as low as 0 psig as long as winds do not exceed 60mph. Troubleshooting found an open vent valve that should have been closed. The valve was closed and the tank was repressurized to 7.0 psig. LOX engineering will continue to monitor pressure.”