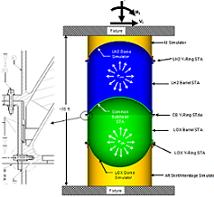 The Constellation Acceleration Study Team are evaluating 160 “brainstorming ideas” in an attempt to reduce the current gap between shuttle and Ares/Orion by up to 18 months. However, such a process would come at a cost, with widescale deletions to Ares I testing and a major deferral to the development of the Lunar Orion.

In response to budgetary pressures and the effort to move up the first flights of Ares/Orion, Constellation planners are considering changes to the Ares I test schedule, including the deletion of certain upper stage tests.

Five upper stage tests and their related hardware are currently being considered for deletion, according to a set of presentations available on L2.

These “development test articles” are designed primarily to validate design assumptions during development and increase the likelihood of a smooth flight qualification program later on.

The advantages to eliminating some of the tests are to reduce costly paperwork, keep CDR (Critical Design Review) on pace for 2010, and keep specifications on track to gain margin.

However, it would mean items such as the Main Propulsion Test Article (MPTA) – a key Ares test item – would miss a large amount of its original test schedule, adding strain to the Ares I-Y test flight, which would lack pre-flight testing as a result.

As the budget for FY08 and FY09 is coming in at lower than requested levels, planners are trying to defer non critical costs to after the retirement of the shuttle. This would be two-fold, with Constellation concentrating on the ISS version of Orion, deferring work on the Lunar Orion to a later date.

The goal is to relieve stress on the critical software development cycles and the availability of high bays and other MAF (Michoud Assembly Facility) facilities.

The plan is in direct competition with the assessment in extending the shuttle program past 2010 – which is currently at the White Paper stage with NASA HQ – should NASA managers decide to add flights to a manifest that is already naturally filling 2010 due to the delay to STS-125. The conflict would relate to additional production of External Tanks.

Extending the shuttle program has widescale support, but importantly lacks willingness from high level managers at NASA HQ and MSFC (Marshall Space Flight Center) who are tied to an Ares I program that is struggling to keep to budget and schedule due to technical issues – as listed in official NASA documentation.

So, to counter the shuttle option of extending its manifest to reduce the five-six year gap, Constellation have set about creating their own options to move the schedule to the left.

“Ground rules and assumptions have been established to focus the schedule options to narrow the scope from an optimized ISS/Lunar design to an ISS design that can evolve to a lunar design that will accelerate the Initial Operations Capability (IOC) baseline between 12 to 18 months.”

However, that saving would be based on the recent slip to the overall Constellation manifest, which dropped to the right by another 12 months this year, and would currently see the Orion 2 manned test flight taking place in 2015, with the first real Orion mission – the first crew rotation with the International Space Station (ISS) in 2016.

The price would be Ares I’s test schedule – with the first test considered for elimination being the SD03 common bulkhead test.

The SD03 test is designed to compare computer modelling to actual hardware behavior in a controlled environment. The main focus is on understanding the interaction of thermal, mechanical, and pressure loads on the common bulkhead structure.

The SD03 test would also “function as a pathfinder for the manufacturing, assembly, instrumentation, handling, testing, and inspection processes of the complex, mission-critical structure,” according to one of the presentations.

The potential impacts are a delay of up to 23 months if issues are encountered during qualification testing, for which the recommended mitigation is to add mass to the structure as an additional safety margin.

The second test under consideration for deletion is a test of the ability for the LOX tank to cope with the loads of the J2-X engine and help define the engine gimbal mount’s required capabilities.

“There is significant risk if MPTA occurs before qual test (would be the first time loads from engine get driven into the LO2 tank aft dome (with a) potential eight month impact to programmatic schedule and costs associated with re-design,” the presentation warns.

Independent analysis is requested along with the recommendation to add mass to the LOX tank wall, on the order of 300-400 lbs. 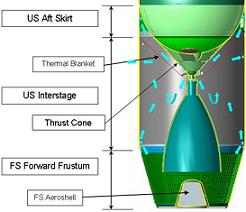 Also on the chopping board are two tests – TD01 and TD02 – which are currently scheduled to validate the thermal control procedures to be used in the interstage and spacecraft adapter spaces, specifically prelaunch and ascent purging and characterizing methods to discover a hazardous gas leak.

The conditions within these spaces are critical as the avionics and other components can be highly sensitive to thermal or pressure abnormalities.

“Given that the US avionics designs and operational requirements are not complete, the risk is that there is a possibility we will have increased heat rejection which may drive a pumped-loop cooling system with the associated cost, complexity and mass impacts,” adds the presentation.

“The probability that the currently designed thermal system will fail the initial qualification test is a perceived to be high.” The impacts are a probable delay to Ares I-Y, if problems are encountered.

Mitigation recommendations are to beef up the avionics or relocate them in addition to improving the thermal control system design, both of which will have budget impacts.

Technically it’s not the tests themselves that are being targeted, but the costs of building the test infrastructure/machinery. A decision against such an effort would need to be solved by additional cash in the Constellation budget.

Another EMU glove modification to debut on STS-126