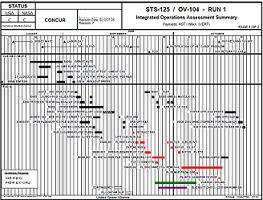 Preliminary milestone schedules have been created for the complex dual processing flows of Atlantis and Endeavour – which will hopefully result in the latter launching in just under six weeks time.

While plans are now solidifying for the short term, evaluations are continuing on whether Atlantis will need to be de-stacked over the New Year.

As previously reported, this weekend will kick-off operations to remove Atlantis’ Hubble servicing payload, before a large quantity of her hypergolics will be offloaded prior to rollback to the Vehicle Assembly Building (VAB) on either October 19 or 20.

“Will pick up this weekend with payload de-mates. Will get the payload to the canister around October 13. Once that is completed, will go into fuel offload,” noted KSC Ground Operations. “Target is to move STS-125 stack from Pad A to High Bay 3 around October 20.”

While they are subject to refinement, preliminary orbiter specific and integrated schedules – available to download on L2 – have been created for the upcoming processing milestones, which focus initially on Atlantis’ eventual move back to the VAB.

Should those milestones remain unchanged, the HST payload will be removed from Atlantis next Tuesday (October 7), with the Rotating Service Structure (RSS) retracted to its parked position on Friday (October 10).

The payload canister containing the HST servicing hardware will then be lowered from the pad the following Monday (October 13), before the RSS is moved back to the mate position later that day, in preparation for the offloading of the hypergolics from the OMS tanks – scheduled for the end of that week (by October 17).

Preparations for rollback to the VAB are tracking RSS retract on Saturday evening (October 18), ahead of first motion off the pad at 4am Sunday (October 19) – although this date is likely to be a NET (No Earlier Than) – given October 20 remains pencilled in for the trip back to the VAB.

Still under evaluation for Atlantis is whether she’ll need to be de-stacked and sent back to her Orbiter Processing Facility (OPF). A list of issues relating to staying stacked in the vertical for a few months inside the VAB are being balanced against the benefits of sending the orbiter back to the home comforts of the OPF.

Some required operations can take place whilst inside the VAB, such as the potential changeout of the range safety batteries on the Solid Rocket Boosters (SRBs) and ET cameras. However, structure engineers are continuing evaluations on ensuring Atlantis’ Payload Bay doors won’t soak up too much moisture – which would be aided by the environmentally controlled OPF.

Other factors include the possibility Wing Leading Edge (WLE) inspections may be required, along with Main Landing Gear (MLG) door seal compression measurements and tire pressures – the latter currently certified for a landing as late as April 15, 2009.

“The one issue that we couldn’t quite close out is the MLG door pressure seal,” noted the Orbiter Project on the latest Shuttle Stand-up/Integration report (L2).

“Had good rationale if we had flown this month, but given that it will be down some number of months and the seal is going to stay in compressed state longer, that requires a little more work. Are off doing that, and we will have further discussion before we fly.”

“Relative to time and lifecycle requirements, the two that we must look at include the WLE corrosion exception,” added the Orbiter Project.

“Though we wrote exception to say ‘out of OPF by October 31’, we will make sure we are good there, given that we will be sitting out at pad and VAB a little longer.

“The team also identified Window Contamination Control System (WCCS) conditioning valves that time-out around March 11. That is the one we will have to work on a little bit more.

“Looking at the various manifest options, and what time and cycle requirements might come due depending on how the launch sequence plays out. Also looking at any analyses that must be redone, or done for the first time because the order of flights has changed.”

Over on Pad 39B, Endeavour – now stood down from her STS-400 role – is patiently waiting for Atlantis to vacate Pad 39A. Operations are closing in on the completion of hypergolic loading on Endeavour, which will cut down on the amount of processing time once she swaps pads.

“The pad was opened for controlled work at 0451 hours Friday to repair an FSS (Fixed Service Structure) elevator and one comm box. Fuel loading operations for the FRCS, APS, and APU’s are scheduled to begin at 0600 Friday morning and continue through 2nd shift tonight.

“Weekend work: S0024 completion activities on Saturday if required. We’ll then be waiting to roll the STS-126 stack off of Pad B and over to Pad A. That will happen on October 25.”

Expanded milestone charts – again preliminary – show STS-126’s “Leonardo” Multi-Purpose Logistics Module (MPLM) payload is due to arrive at 39A on October 23, just prior to Endeavour’s mini-rollout from 39B.

The November 14 NET (No Earlier Than) launch date – as previously reported and now classed as official – remains fluid, with the smooth operation between removing Atlantis from 39A, and the timely arrival of Endeavour, part of the key milestones, along with the added factor of “crew loading” – which remains on a tight timeline.

Flight Readiness Review (FRR) meetings also need to be conducted, where all relevant departments will discuss their status ahead of launch. So far, no departments have raised any major concerns with the November 14 NET.

“Working assessments related to the launch date change for STS-126,” noted EVA as one example. “Don’t see any significant pokeouts.

“Waiting for additional input next week. The bigger impact will be the number of suits in flow. There were some limited life components with the suits scheduled to fly on STS-125 that will require some additional maintenance.”

Engineers are closing in on next Wednesday for the switchover from Side A to Side B of Hubble’s SIC&DH (Science Instrument Command and Data Handling) system.

Due to the complexity of the operation, engineers carried out a “dry run” on paper of procedures on Friday.
“HST team is moving forward with plans to take telescope to side B. Campbell independent review (gave) a “go” to dry-run this activity on VEST (their version of SAIL – Shuttle Avionics Integration Lab),” noted Flight Operations and Integration.

“On Monday, HST will brief results and plans to Goddard Center Director. Tuesday, HST will take it to HQ. Wednesday, plan is to have them press on with commanding over to side B. When complete VEST work to take the side B routine over, will start flight qualification work on the new SICBH boxes.”

The results of Wednesday’s switchover will play a major role in the requirements Atlantis will be tasked with, when she eventually launches to service Hubble, next February or April.

Atlantis to rollback to VAB on October 20 – Hubble troubleshooting latest