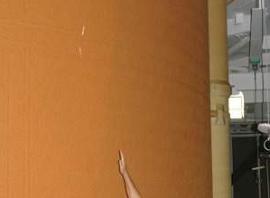 Space shuttle Endeavour has been escorted on a mini tour of the Kennedy Space Center (KSC) pads this morning, after she was transported off Pad 39B for a seven hour journey to Pad 39A.

The move was set to take place on Saturday. However, poor weather is expected in the local area this weekend – which threatened to delay Endeavour taking up residency at 39A – led to the decision to move the stack ahead of schedule.

The STS-126 payload (MPLM) was transferred to Pad A early on Wednesday morning, with the payload canister’s lowering from the Payload Checkout Room (PCR) – in order to make way for Endeavour – carried out ahead of the required schedule.

“Moisture associated with an area of disturbed weather over the Caribbean near Central America is still likely to move over FL with the threat of rain and possible severe weather late Thursday thru Saturday morning,” noted processing information on L2.

“Due to pending weather, preparations are in work to move Pad B to Pad A rollaround into Thursday. Payload canister lowering is a constraint to this move (now complete).”

Endeavour departed Pad 39B at around 08:30 local time, before heading to the fork in the crawlerway that branches off between the two shuttle pads, followed by the to move forward on to Pad 39A, for arrival at around 15:00. Due to overheating bearings, her arrival took an additional hour.

The Rotating Service Structure (RSS) will then close to the mate position between 18:00-19:00, as STS-126 prepares for the next launch preparation milestone – the Terminal Countdown Demonstration Test (TDCT), which is scheduled to take place at from October 27 to 29.

Engineers will also check Endeavour’s left OMS Pod, following a contact issue between the RSS and the orbiter during retract operations. No visible damage has been observed after the incident – which was mitigated by the immediate halting of the RSS operation when the contact was spotted.

“Elephant hide (protective padded sheet) covering the side seal motor contacted the left OMS pod during RSS retract. The RSS retract was immediately halted and the RSS was taken back to the mate position to provide access,” noted Thursday morning processing information.

“The elephant hide was removed and RSS retract was then completed successfully. There was no visible damage to the left OMS pod. An engineering evaluation will be underway.”

Meanwhile, Atlantis is now safely back inside the Vehicle Assembly Building (VAB), where she will remain – pending confirmation she won’t require de-stacking – for the next couple of months.

Due to the liberation of a stainless steel support rod from Atlantis’ FRCS (Forward Reaction Control System) ahead of her rollback from Pad 39A, evaluations are continuing to take place on the STS-125 stack.

Three areas of damage have been found on External Tank (ET-127), along with a ding on an aft booster separation motor.

“Two impacts were observed at (station) XT-1623, these locations are accessible from D Roof but would require some access since they are located about six feet out of arms reach.

“All three areas will probably require a hands on assessment including red dye because of the nature of the damage and would be addressed per. Depending on the depth of the defects after assessment we would potentially have two options.

“If the defect is fairly shallow it could be as simple as a sand and blend, however if it extends to deep we would most likely be in a PDL foam repair situation.