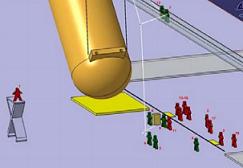 NASA, the United Space Alliance and Lockheed Martin have presented their flight rationale for the External Tank that will fly with Endeavour next month (STS-126), following an extensive investigation into a suspect noise from within the tank, heard shortly after its arrival inside the Vehicle Assembly Building.

ET-129 was being transitioned into the vertical position – following its arrival from the Michoud Assembly Facility – for transition into its checkout cell, when a handful of engineers heard a metallic noise coming from inside the tank.

Even though most of the engineers present didn’t hear the noise, managers immediately called for a full investigation – one which would reach as far as the Flight Readiness Review (FRR) and the Space Shuttle Program (SSP).

Those inspections went on for several days, before approval was given to proceed to mating the tank with its SRBs, as Endeavour’s stack pressed forward with becoming the STS-400 LON (Launch On Need) shuttle in support of Atlantis’ now-postponed STS-125 mission.

Noise in the Tank:

A total of 15 engineers were present in the VAB when ET-129 was being lifted for its placement in the checkout cell. Interviews with all of the workers found that only five of them at ground level actually heard the noise as it was being tilted from a horizontal to vertical position.

“Description of Event: Suspect noise was heard by technicians when the tank was between 30 degrees and 45 degrees from horizontal, possibly originating from +Y Intertank region, with light metallic descending sound lasting around two seconds,” added the presentation.

Tanks are known to make noises, especially during their barge transit from New Orleans. Ground Support Equipment – such as lanyards and the crane – can also be blamed for such noises – though in this situation, all such equipment was cleared from the root cause.

Thus the concern related to the potential of FOD (Foreign Object Debris) being loose inside the tank, which would become a serious threat during ascent. Clearing the tank from FOD became the centralized approach for the investigation, regardless of how unlikely FOD would have been found.

Even with the lack of FOD found during the inspections, the structure of the tank’s inner workings did not support the presence of debris, adding confidence to flight rationale.

“Inspections focused on hardware features where falling FOD could be retained. Inspections of internal LO2 and LH2 tank volumes not top priority based on scenario description and hardware configuration. Unlikely for sound to be heard from large insulated volumes and to be non-symmetrical.

FOD inside the tank holds three main threats to safety during ascent, all of which have been deemed as low risks, post-inspections.

1) Ingestion into the orbiter’s MPS: where FOD failed to be caught by one of the ET screens, and caught inside by a pre-valve screen in the MPS, but to the point it restricts the flow of propellant.

2) Ingestion of FOD into a SSME (Space Shuttle Main Engine) – caused by the FOD smashing through one or more screens – potentially causing an engine out scenario.

3) Potential of high energy impact of FOD on flight hardware causing a spark that leads to flammability/explosion.

It is unlikely the source of the noise will ever be pinpointed – unless one of the downstream tanks suffers a similar incident that shows a potentially identical root cause, but thanks to built-in safeguards, and the additional inspections carried out in the VAB, ET-129 is clear to fly with Endeavour next month.