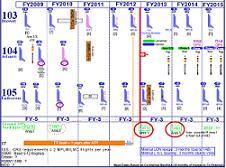 The key results of a major assessment into extending the shuttle manifest through to as far as 2015 have been sent to NASA HQ on Tuesday, in the form of a draft White Paper.

The document – which is expected to back up claims that two orbiters, flying through to as far as 2015, is a viable proposition from an engineering standpoint – has been filled out with comments from various shuttle related departments.

However, the likelihood that the extension will gain support from upper management at NASA HQ is very much in the balance, with NASA’s official line one of support for the transition of budget resources from shuttle – in 2010 – to the Constellation Program (CxP).

A split of opinion exists between some of the major players within the Human Space Flight program, with NASA administrator Mike Griffin firmly against extending the shuttle manifest past 2010, while some of the big names with the Space Shuttle Program (SSP) firmly in favor.

The SSP has played a major role in creating viable extension options, which have been based mainly from a technical standpoint. This has seen the creation of a White Paper draft that now heads to NASA HQ for the next stage of discussions.

“There was a Shuttle Extension study meeting where all the Projects came in and talked about impacts and issues,” noted comments from the SSP on a recent Shuttle Stand-up/Integration report. “It goes up to HQ on October 7.”

Gaining support for the extension from CxP managers – who are currently against such a forward plan – will require compromises, as seen in comments that referenced conversations between Shuttle manager John Shannon and CxP manager Jeff Hanley.

“We have a long way to go on Shuttle Extension study. It’s a good start,” added recent comments sent to the SSP, available on L2. “Mr. Shannon exchanged a lot of emails with Jeff Hanley. We both sensed we are working as two very separate Programs.

“What we need is for the team to try very hard to ‘walk in the other Program’s shoes’, and understand their requirements and needs. Let’s try to think of clever ways to meet the requirements of both Programs if we do this extension.

“We will all have to compromise and think about what is best for the Agency. Overall, the data we got was really good. We see that the teams are starting to work together. We just need to continue doing that.”

Mr Shannon also pointed towards the need for CxP to concur with SSP’s plans on the White Paper, or it threatened to be a useless document.

“As we go through the different Project write ups and white paper, please make sure those are coordinated with the CxP desk. If not, it is not a product that we can even use,” added the comments. “This is an Agency discussion, not a Shuttle Program discussion.”

Numerous factors are in play to extending the shuttle manifest to a maximum of an additional 13 flights, through to 2015, regardless of the technical ability of extending the operational capability of the orbiters, not least the additional cash it would cost.OMRSD (Operations Maintenance Requirements Specifications Document) when Atlantis was saved from retirement this year – so as to aid the health of the vehicles past 2010.

From an engineering standpoint, several contractors will need to continue to support the two orbiters that would fly past 2010, with flight spares the critical issue. One orbiter would be retired to a “near flight ready” state to act as a donor for her two sisters.

Availability of spares would be mixed in with use of the Orbiter Maintenance Down Periods (OMDP) in-between flights, as refined in the

As previously reported, amendments to the H.R. 6063 Bill are now waiting for the President to sign, which would – among other items – ensure a roadmap for extending shuttle, dependant on additional funding being allocated.

The Bill’s key importance at this stage is the requirement to cease operations that would hinder such a manifest extension. This includes the critical External Tank production path at the Michoud Assembly Facility (MAF), which is currently being adhered to.

The issue of lifeboat availability on the ISS through such an extension has been aided by the passing of an extension to the Iran, North Korea, and Syria Nonproliferation Act (INKSNA) waiver through to July 1, 2016, ensuring use of the Russian Soyuz in the event of an evacuation.

An alternative COTS D- capability has also been mentioned, though the signing of the INKSNA waiver extension has reduced the likelihood of it being required.

The big debating point is the potential to reduce the gap between the retirement of shuttle and the ‘replacement’ via Orion, and thus ensuring US controlled manned access to the ISS via a domestic launch system.

Currently, Orion is due to launch its debut manned flight in 2015. However, the first crew rotation on the ISS won’t happen until one year later on Orion 4 – in reality a six year gap.

Constellation have repeatedly argued that a reduction in their budget projections over the coming years – which would be the likely outcome of a shuttle extension – would push their schedule out further, meaning the gap would only be deferred to later in the decade.

However, Constellation’s technical challenges have already managed to push out their schedule by around two years without any hindrance from shuttle, which has added fuel to those that do not wish to retire a working launch vehicle without assurances Ares and Orion won’t suffer further setbacks.

This argument is understood to be central to the Astronaut Office’s misgivings about Ares I.

Another factor is safety, with Mr Griffin recently citing safety numbers that would make it extremely unpalatable to add shuttle flights on to the end of 2010. However, probability numbers, it has been argued, can be mitigated via the engineering plan laid out in the extension assessments.

No timescale has been given on an ultimate decision relating to a manifest extension – which would still required budgetary support from the new President next year.