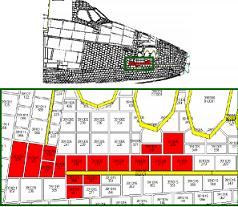 The ‘ooze’ that leaked from Endeavour’s F5R Vernier thruster has now been cleaned from the 15-16 tiles it contaminated. However, a fillerbar in the location of the leak will need to be replaced ahead of STS-126’s launch next month.

Endeavour is waiting for next week’s rollaround to Pad 39A, once her older sister Atlantis has headed back to the Vehicle Assembly Building (VAB).

Atlantis will start her rollback at 7am local time on Monday, before the pad is prepared to host Endeavour for her STS-126 mission to the International Space Station (ISS).

With less than a month to go before the scheduled launch, managers and engineers are busily preparing for the SSP FRR (Space Shuttle Program Flight Readiness Review), set to take place on October 21 through 22.

The baseline for this review was completed by the MOD FRR (17 presentations available to download on L2), which was passed without any major issue being noted.

“MOD conducted our STS-126/ULF2 Flight Readiness Review. The MOD team has done an excellent job preparing for this mission and is ready to support a November 14th launch date,” noted an overview of the MOD FRR.

Once the SSP FRR (Level II) is completed, the process will head towards the October 30-31 Agency FRR (Level I) to clear the mission to proceed towards launch.

However, the actual November 14 launch date won’t be ‘set in stone’ until the agency level meeting on November 5, which will realign the near-term launch schedule, post-Hubble delay to STS-125. STS-126’s launch date is not expected to be affected by this meeting.

The SSP FRR is set to discuss a number of interesting items related to Endeavour’s mission, though the recent evaluations into adding additional payload into her “Leonardo” Multi-Purpose Logistics Module (MPLM) – via a Verification Loads Assessment (VLA) – have now been fully cleared.

Items of interest are minor, such as the certification – or lack thereof – of a number of washers that are used to install the carrier panels that interface between the RCC (Reinforced Carbon Carbon) leading edge and the primary wing.

“Lower LESS carrier panels on OV-105 (Endeavour) have some non-flight certified washers on them left from bench testing – this will be a special topic at next week’s Program FRR.”

Another item going to the SSP FRR relates to the gloves used with the Advanced Crew Escape Suit (ACES), which has immediately been mitigated by adding spare gloves to STS-126’s manifest.

“ACES glove issue will be a special topic at Program FRR. Found USAF had similar problems with holes in gloves over time,” added the stand-up report. “Will put a few more mitigations are in place for STS-126(ULF2), including carrying two extra pairs of gloves on the flight.”

Also up for discussion will be the ‘leak’ from Endeavour F5R thruster, which exposed around 15 tiles to a liquid that appeared much like syrup; amber in color, when it dripped on to an area of TPS (Thermal Protection System).

NASA, USA and Boeing engineers inspected the area of contamination to determine the extent of the exposure to the TPS, and found no evidence of liquid flowing towards the “structure side” of the tiles.

However, once the “ooze” – as it’s being described – was cleaned from the TPS by wiping the surface with Isopropyl alcohol, membrane degradation was observed on an exposed fillerbar. This will need to be replaced.

“Engineering Team walkdown detected some minor areas requiring an additional swipe to eliminate trace amounts of what appears to be the contaminant,” noted a status report on L2.

“It was also decided to remove and replace some exposed fillerbar segments that had membrane degradation that possibly allowed the exposed felt to be subject to the desiccant fluid composition.”

No timescale has been given for that process, although the launch date is not under any related pressure. No other work is being carried out on Endeavour over the weekend, with the concentration being placed on Atlantis’ rollback to the VAB on Monday morning.

STS-126 is a major logistics mission to the ISS, playing a key role with equipping the Station ahead of the transition to a crew of six. However, its four EVAs will play a major role for the ISS, with a huge amount of work being conducted on the troublesome starboard SARJ (Solar Alpha Rotary Joint).

A full overview of the EVA work on the SARJ is available on one of the MOD FRR Mission Overview presentations, and will be published as an article next week.

L2 members: All documentation – from which the above article has quoted snippets – is available in full in the related L2 sections, now over 4000 gbs in size. CLICK HERE TO JOIN L2.