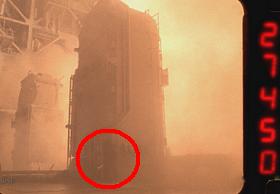 Engineers at the Kennedy Space Center (KSC) have compiled a preliminary report on the state of Launch Pad 39A – highlighting a lack of major damage to the pad’s structure after the year’s fourth shuttle launch. However, a couple of items of interest are under investigation.

“Post launch walk down did not find any items that could cause an issue for flight hardware or the ability to do a launch on need,” notes the Post-launch Pad Ice/Debris Findings presentation, available for download on L2.

“Hold down post #3 had more than typical erosion on the RTV coated blast shield,” notes the presentation.

The presentation added that the blast heat shield over the hold down post did close properly in the initial hundredths of a second of flight. An anomaly investigation into an issue with the capture of debris – in this case a spring – has also been opened, and is available to review in a separate presentation.

This erosion is not of particular concern as SRB intensity varies slightly from mission to mission. As always, a complete investigation will be conducted with any forward actions going before the all powerful Program Requirements Control Board (PRCB) for approval at a later date.

The other area of interest on the MLP is the right hand Tail Service Mast (TSM), which houses one the T-0 umbilicals.

During the initial seconds of Endeavour’s climb off the MLP, the intense vibrations and exhaust from the Orbiter’s engines and SRBs blew one of the TSM doors open.

At this time, it is unknown what, if any, damage the interior of the TSM sustained.

Highlighting the ability of the launch team to work through unexpected issues late in the count, the unlatched inner White room door provided a few tense moments for launch viewers during Friday night’s countdown as launch personnel calmly assessed the unlatched door’s potential to create debris hazards during Endeavour’s liftoff.

After a few minutes of consultation, launch officials decided that the unlatched door did not pose a debris threat to Endeavour during the initial moments of ascent. Additionally, the launch team concluded that any damage sustained to the White Room, and its inner door, would be minor. 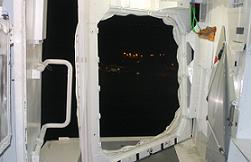 Reinforcing the launch teams’ expertise is the lack of damage the post-launch inspection teams found in the White Room.

“OAA (Orbiter Access Arm) was inspected due to the pre-launch issue with the door seal,” notes the Post-launch Pad Ice/Debris Findings presentation. “The door seal (had) free motion (and) the weather seal at the bottom of the door was damaged.”

In addition to the damaged weather seal, some loose A/C louvers were discovered, with some scattered around the White Room during the intense vibrations of launch.

Rounding out the list of damaged White Room items were a bolt, washer, and tie wrap that were retrieved from the White Room floor.

As highlighted by this site in July of this year, engineers undertook an intense effort over the summer to repair a badly damaged flame trench at Pad 39A.

Over 3,500 bricks liberated from the east wall of the SRB flame trench during Discovery’s STS-124 launch on May 31st.

After an extensive evaluation, engineers at the Kennedy Space Center embarked on an ambitious repair of the flame trench, not only completing all scheduled repairs before the rollout of Atlantis (STS-125), but also finishing ahead of schedule.

The intense repair effort has paid off, with the flame trench sustaining little damage during Endeavour’s launch. The new fondue fyre survived launch in good shape as did the remaining brick wall and refractory concrete. 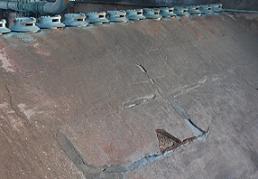 “SRB flame trench had one brick lost and an area of fondue fyre erosion on the flame deflector,” notes the post-launch inspection document.

The eroded area was approximately 25 square feet in dimension and is at least 10-years old.

The liberated brick did not impact the lower surface of the MLP or any other pad structure. Some material from the SRB flame trench was found outside the northern pad perimeter fence.

In addition to the SRB flame trench, the Space Shuttle Main Engine (SSME) flame trench lost one piece of fondue fyre material. The liberated material, approximately 10 square feet in dimension, remained mostly intact and was found at the bottom of the deflector.

An additional 4inch x 4in x 4inch piece of fondue fyre from the SSME flame trench was found on the east pad surface south of the MLP.

In addition to the repaired flame trench, engineers installed a series of sensors in the flame trench to monitor the pressures induced on the trench during SRB ignition. All sensors remained in place during launch. Information from these sensors is being evaluated at this time.