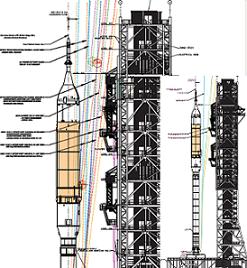 Documentation related to Ares I’s Lift Off Drift Curve issue has highlighted concerns with the vehicle’s Thrust Vector Control (TVC), via its reaction to controlling the vehicle as it climbs away from the pad.

The concern with Lift Off Drift Curve has been reported on a singular aspect of high winds from the south, with the threat of the vehicle being blown towards the Fixed Service Structure (FSS) and a potential contact with the top of the tower.

However, as noted via a recent Constellation media briefing, mitigation of high wind conditions is not a problem – due to the infrequency of such unacceptable weather conditions in the area.

Those unacceptable conditions were quoted at the extreme end of the scale (34 knots from the South), with documentation showing that the threat begins at 19 knots – which is not a rare condition. This is what the restriction will be reduced to for winds from the South.

Documentation – several presentations available on L2 – shows, however, the main focus behind the associated computational models have been used to highlight how the TVC manages the controllability and stability of the vehicle during the first few seconds of ascent, as the vehicle edges towards the tower during launch.

At the base of the rocket, the hot gas flow from the first stage Solid Rocket Booster (SRB) is controlled by a directional nozzle which can gimble to steer the vehicle on a designated path through flight.

This nozzle is attached in three locations, via a large bearing deep inside the SRB, and two hydraulic actuator rams mounted 90 degrees apart.

Like balancing a pencil on the end of your finger, the TVC system must balance the thrust as it launches, but at the moment of ignition the 3.6 million pounds of thrust all push against the nozzle.

On the two sides where the rams are attached, the rams hold the nozzle firmly in place, but on the opposite side of the nozzle, where there are no such devices providing support, the nozzle deflects/rotates by a significant amount.

This ignition deflection means that the rocket starts its launch with its nozzle pushing the rocket off-center, and the TVC must start to fight this effect from the first moments of the flight. As the rocket begins to climb, the rocket pivots around its center of gravity (near the top of the first stage) and the aft of the rocket is pushed off-line. This is known as “fish tailing”.

The TVC computers then counteract that move by gimbaling the nozzle to produce a force to bring the bottom of the rocket back into line, but in the few seconds that takes to occur, the rocket may already have drifted closer to its launch tower.

When the rocket is drifting sideways, the TVC must then be directed the opposite way to counter the drifting, but this now means the vehicle’s Aft Skirt must be pivoted outwards, even further towards the tower as the vehicle continues to climb.

Any additional wind strength during this period – even at the lower end of the noted range of concern – will need to be factored into computational models via test flight data.

For the pad itself, protective covers over the retracted umbilical arms stick out from the side of the tower. This protective structure is the location which analysis is currently showing is in primary danger of being clipped by the Aft Skirt of the vehicle as it flies past what is known as the Dog House. 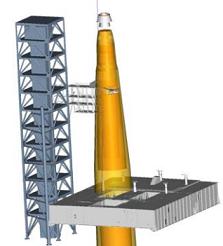 An additional concern – noted in documentation from Ground Operations at Kennedy – is that the sideways drift of the vehicle will often mean the blast of the SRB plume impinges on the structure of the launch tower itself.

Besides being extremely hot and powerful, the exhaust of the SRB is also highly toxic and corrosive hydrochloric acid and abrasive aluminium oxide – so impingement on the tower would mean significant maintenance work be required to repair the tower after each launch.

Currently, the target Constellation are aiming at, is to be able to launch within 60 days of each Ares I launch.

Lift Off Drift Curve documentation has recently been classed in the media as associated only to high wind conditions, when in fact the concern is a specific requirement engineers will need to ensure they mitigate via the TVC – regardless of high winds.

Wind, of course, is a factor, one which increases – rather than being a singular cause of – Lift Off Drift Curve issues. The computer simulations behind the latest charts indicate a 34 percent chance of contact between the aft skirt and the Service Module umbilical arm protective Dog House, along with a near 100 percent exhaust plume walk over the Mobile Launcher Tower after the Ares I clears the tower during worst case conditions.

The Constellation Architecture Requirements Document (CARD) CxP 70000 calls for Ares I to be able to launch with a 34 knot wind at 300 feet, from any direction. The computer simulation indicated the need to restrict winds out of the South East to South West to under 11 knots to avoid contact. This has resulted in a realigned launch constraint for such wind threats alone.

However, the vehicle would still – according to documentation – cause plume walk over around 15 percent of the time, even with that restriction in place.

The issue is by no means a showstopper, and can be mitigated via the addition of contingency spacing between the ML and the vehicle during its first few seconds of launch. 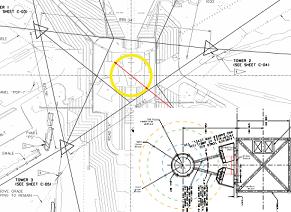 Documentation already exists that shows studies for increasing the clearance from the tower to vehicle center line from the current 40 feet, to 46, 48 and 50 feet.

These longer arms would weigh more and require additional tower structure to support the additional weight.

Additional weight is something the new ML can not really afford, as current documentation shows the vehicle and infrastructure is already at the top end of the existing crawler capacity.

Schedule is also another factor, with actual construction of the new ML was to start with in 90 days. A redesign of the ML at this late date would also add costs to the program.