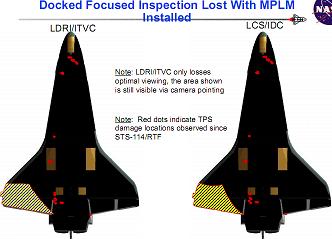 Space shuttle Endeavour has docked with the International Space Station (ISS), and her crew have ingressed the orbital outpost on Flight Day 3 of STS-126. Endeavour’s arrival was preceeded by the visually stunning RPM (Rbar Pitch Maneuver).

The photos taken by the ISS crew during Endeavour’s backflip will be added to the arsenal of data gained on the health of the orbiter’s TPS (Thermal Protection System). Any areas of interest can be further evaluated via a Focused Inspection.

Should that be called, workarounds will be put into action – should the inspection be related to a few areas on the starboard wing – due to ‘structural interference’ via the soon-to-be installed “Leonardo” Multi-Purpose Logistics Module (MPLM), that Endeavour has brought to the Station. 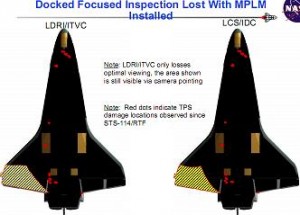 “Focused Inspection for areas other than area shadowed by MPLM on starboard wing will take place on FD6 (if required). Best effort will be made to perform only a single FI (on either FD4 or FD6).”

The arrival of the fleet’s youngest orbiter was issue-free, with the KU radar proving to be unaffected by the problem relating to the Antenna’s software. A slight docking misalignment was soon rectified, ahead of hatch opening.

“Today has been another great day for human space flight,” noted deputy shuttle manager and Mission Management Team (MMT) chair, Leroy Cain. “All of the teams across the country are very excited about what we’re about to embark on. It’s been a great day so far. The mission is just really getting underway now.”

Endeavour arrives at the orbital outpost with equipment that will prove vital for the future expansion to a six crew Station. The payload also includes a Water Processor Assembly (WPA) and the Urine Processor Assembly (UPA), which are the less glamorous, but essential components for long duration space flight.

“The WRS and WHC racks will be outfitted with loose hardware also launched on STS-126/ULF2. The Water Processor Assembly (WPA) and the Urine Processor Assembly (UPA) will be activated during the docked mission to process urine from a Russian water container, return that sample for ground processing, and process an onboard sample using the TOCA.”

Items are already being transferred from Endeavour’s middeck, which includes several items for the upcoming EVAs, which are an important series of spacewalks to troubleshoot the troublesome starboard SARJ (Solar Alpha Rotary Joint).

“Over the course of EVAs 1, 2, and 3, the crew will clean and lubricate the race ring, and change out 11 Trundle Bearing Assemblies (TBAs) on the Starboard SARJ,” noted FRR documentation.

“The Port SARJ will be cleaned and lubricated as a pre-emptive measure to mitigate the potential for the friction-induced issues seen on the Starboard SARJ. Lubrication will be applied to 50 percent of the surface, relying on SARJ rotation to spread to the remaining surface.

“Starboard SARJ to be at a position of 105 degrees for EVA 1 and then 60 degrees for EVAs 2 and 3. This allows for clean race ring to be rotated under the Drive Latch Assemblies (DLAs), which are not being removed for cleaning. EVA 4 must start off with the Port SARJ at either 30 or 210 degrees for both applications of lubrication.”

During the Mission Management Team (MMT) meeting, it was confirmed that only one debris event is being looked into at this time. Now timed at T+25 seconds, the event was believed to be a strip of thermal blanket.

However, on orbit imagery now confirms the area in question to be intact. No strike on the vehicle occurred during the event, which is now believed to be ice liberating from the vehicle.

What was believed to be a second debris event, timed at T+133 seconds, has now been confirmed as a visual effect, when the OMS engines on Endeavour fired to provide their assist early in second stage flight.