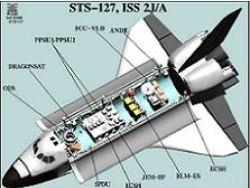 Space shuttle orbiter Endeavour has landed at the Edwards Air Force Base in California, following a hugely successful STS-126 mission to the International Space Station (ISS). She’ll now undergo initial deservicing activities at the Dryden Flight Research Facility, before a ferry trip back to the Kennedy Space Center (KSC) on top of the SCA (Shuttle Carrier Aircraft).

Endeavour’s Californian option was taken after unacceptable weather conditions at KSC for both of Sunday’s opportunities – along with similar forecasts for Monday – resulted in a forward plan to head to Edwards.

In a pefect touchdown, commander Chris Ferguson was understandly pleased to be back on the ground after over two weeks in micro G.

“We thought we’d take the opportunity to come out and take a look at this gorgeous orbiter,” he said, after walking around Endeavour about an hour after wheels stop.

“Thank you to all throughout the NASA communities who supported us. It’s great to be back on the ground and back in California.”

Endeavour became the first and last an orbiter to place her wheels on the tempory runway 22 at Edwards, due to refurbishment of the main runway that runs parallel. The main runway will be used for STS-119 onwards.

The orbiter will cared for by Dryden engineers for around five days, as Endeavour is moved to the mate/demate facility, where she will be fitted with an aft cone over her SSMEs (Space Shuttle Main Engines) to reduce aerodynamic drag during her ferry flight.

NASA’s SCA 747 will be tasked with carrying Endeavour home, which will be via several stops enroute. The whole process will result in Endeavour arriving back into her Orbiter Processing Facility (OPF) in around a week’s time.

There she will be put through further deservicing processing, ahead of the pre-flight flow for her next mission – STS-127, which is awaiting a firm launch slot, due to continued refinements to the downstream shuttle launch manifest.

STS-127 will complete assembly of the Kibo Laboratory complex, via a complex array of payloads that will require a 15 day mission with five baselined EVAs. Aside from installing the Japanese Experiment Module – Exposed Facility (JEM-EF), Endeavour’s crew will be tasked with replacing six batteries on the P6 truss.

Taking center stage in Endeavour’s crowded Payload Bay will be the JEM-EF and the Japanese Experiment Logistics Module – Exposed Section (ELM-ES). Once at the Station, crewmembers will conduct an EVA to install the JEM-EF to the JEM-PM.

A subsequent EVA will see astronauts install the ELM-ES to the JEM-EF and transfer three payloads to their on-orbit home on the JEM-EF.

Following the transfer of these three payloads, the ELM-ES will be transferred back to Endeavour’s Payload Bay for return to Earth. 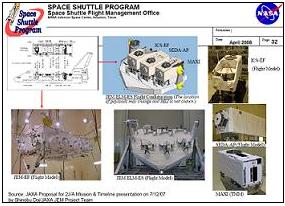 In addition to the JAXA (Japanese Aerospace Exploration Agency) payloads, the remaining bays of Endeavour’s Payload Bay will be filled with a variety of payloads for not only the Station, but also the Department of Defense and the Johnson Space Center Engineering Division.

After the Kibo activities are complete, the crew will turn their attention to replacing six batteries on the P6 truss. These batteries will ride up-hill on the Integrated Cargo Carrier-Vertical Light Deployable (ICC-VLD).

After maneuvering the ICC-VLD to the Station’s truss, astronauts will remove and replace six batteries on the P6 truss. Once removed, the old batteries will be stowed on the ICC-VLD.

Also hitching a ride on the ICC-VLD are the LDU (Linear Drive Unit), PM-2 (Pump Module-2), and the SGANT (Space to Ground Antennae) – all of which will be transferred to ESP-3 (External Stowage Platform-3) during an EVA.

As with the ELM-ES, the ICC-VLD will be returned to Endeavour’s Payload Bay for return to Earth at the end of the mission.

In addition to these ISS-bond payloads, Endeavour will also carry two sidewall mounted secondary payloads which will be deployed in the post-undock timeframe.

One of these payloads is the Canister for All Payload Ejection/Atmospheric Neutral Density Experiment-2 – also known as CAPE/ANDE-2 – for the US Department of Defense. CAPE/ANDE-1 was deployed by the STS-116 crew in December 2006.

The second sidewall payload will be SSPL/DRAGONSAT (Space Shuttle Picosat Launcher/Dual RF Autonomous GPS On-Orbit Navigator Satellite) for the Johnson Space Center Engineering Division, notes the PRCB document. The payload bay will also include two ‘payloads of opportunity’ for the Department of Defense.