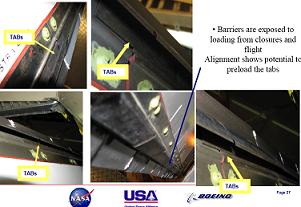 STS-126 marked Endeavour’s EOM-1 (End Of Mission minus one day) with checkouts of the orbiter’s vital systems that will be used during Sunday’s re-entry, and the deployment of a Picostar from Endeavour’s Payload Bay. Due to poor weather in Florida, Endeavour will head to Edwards Air Force Base for landing at 4:25pm Eastern.

A weather front – along with unacceptable crosswinds – removed the possibility of Endeavour landing on one of two opportunities at the Kennedy Space Center (KSC), which eventually led to the third opportunity to land at Edwards Air Force Base in California becoming the only available option for Sunday.

Endeavour could have attempted a return to her home base of KSC on Monday, which was be the basis of the decision on whether to head to California on Sunday, or wave off in the hope of landing at KSC on Monday. However, due to poor weather expected again on Monday, Edwards on Sunday was decided as Endeavour’s best opportunity to land.

The Edwards opportunity on Sunday will result in a Californian landing at 4:25pm Eastern.

While the processing timelines for the downstream manifest can handle the additional week it would take to return Endeavour to KSC – via the SCA (Shuttle Carrier Aircraft) – the debut use of the temporary runway at the Edwards Air Force Base is now assured.

The main runway 22 has undergone extensive resurfacing – which initially removed it as an option for Discovery’s return home on STS-124. However, on that occasion, Discovery landed on the Shuttle Landing Facility (SLF) at KSC.

Interestingly, work has been completed ahead of schedule on the main runway at Edwards, but not in time to relocate the shuttle landing aids required by the orbiter from the temporary runway, thus the refurbished strip will only be available from STS-119 onwards.

Although the new 12,000 x 200 ft runway is shorter and narrower than the main runway (15,000 X 300 ft), flight rules were put in place since STS-124 to ensure Endeavour will still have lots of margins for her rollout.

Endeavour is continuing to behave herself on orbit, with no new issues of note being worked by engineers at the Johnson Space Center (JSC).

Flight Day 16 involved the final preparations for re-entry, with the checkout of the flight control surfaces – which used one of the orbiter’s Auxiliary Power Units (APU). The crew also tested all of Endeavour’s Reaction Control System jets. 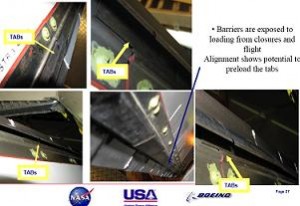 During STS-124, those tests caused one of Discovery’s Rudder Speed Brake (RSB) tabs to liberate from the aft of the vehicle. Mitigation via the orbiter’s processing flow appears to have worked, with no repeat noted during FD16’s checkouts.

The purpose of the RSB thermal barriers and spring tabs are to protect the RSB cavity from plume radiation during ascent and to control/maintain the cavity venting requirements during ascent. The tabs are attached to the barriers with three spot welds. Fatigue due to chatter during ascent is considered the primary cause for these welds to fail, and result in the STS-124 liberation.

During the mitigation on all three orbiters, Endeavour was found to have a problem with one spring tab that was broken at the weld point, leading to its replacement during her STS-126 processing flow.

Ironically there was a liberation event during the checkouts, although this time it proved only to be a temp pressure label that liberated from Endeavour’s payload bay, and has no mission impact.

Later in the day, Endeavour carried out the deployment of a solar cell experiment Picosat on behalf of the Department of Defence (DOD). The tiny satellite was sent on its way via a spring release system on the cargo bay’s sidewall.

The satellite will test two types of new solar cells in the harsh environment of space, with the performance of the solar cells – and their degradation over time – to be used to determine if they are fit to use in flight.

In a month’s time, its 8D model rocket motors – the same used by some rocket model rocketeers – will fire to adjust its orbit.

“Unused space being used to study micro satellite propulsion with solid rocket motors via ground command and tracked by radar,” added the presentation. “Picosat has ability to adjust its own orbit and will do so at end of primary mission. Burn is no earlier than 30 days after deploy.”

Updates to this article will be added during the day – refer to the live coverage pages for up to the second updates.

Endeavour undocks from a healthier ISS – heads to Late Inspections